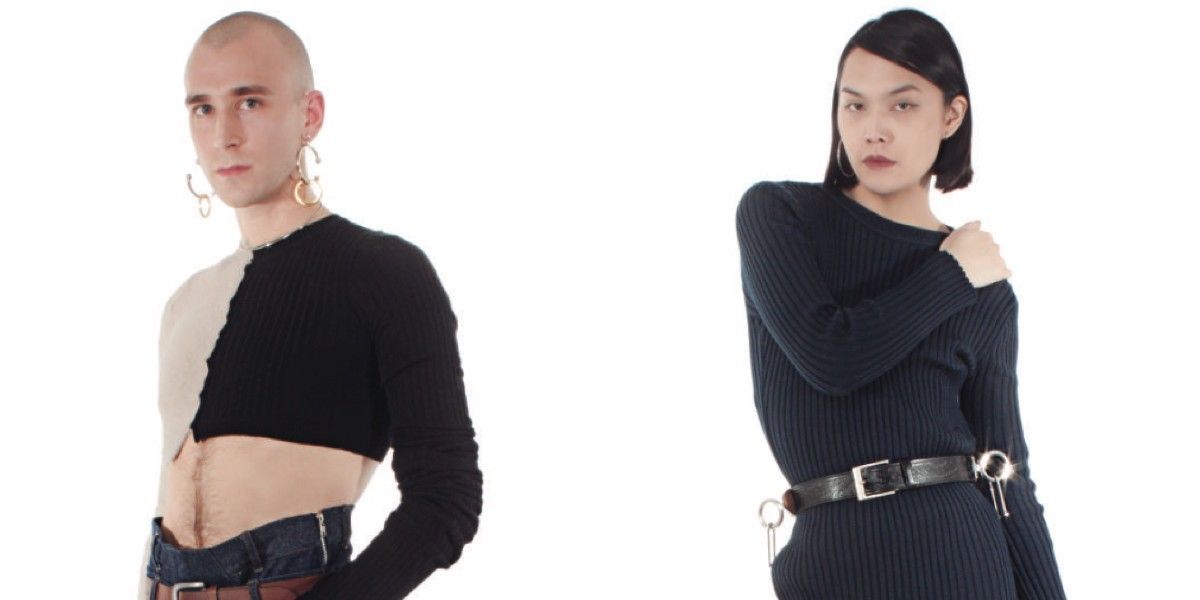 Victor Barragán's clothes are disjointed and double over on each other; two seams where there should be one, or one sleeve where there should be two. Instead of one drawstring on a hoodie there are three crowded on top of one another. They are out of step with themselves, tense in their construction. Cases in point: One half of a chintzy faux fur pea coat is sewn together with a black shearling perfecto, or a black ribbed sweater is halved with a cream-colored tufted wool partner whose sleeve extends to the floor— split screens of otherwise recognizable wardrobe staples. You get the idea. Except, talking with Barragán, they are less about an idea or a narrative than simply an instinct.

The 24-year old self-taught designer has two ready-to-wear collections under his belt after moving last year from Mexico City, where he was born and raised, and is prepping his third to show this September in New York. Originally creating custom t-shirts with meme or internet-culture prints while a student in Mexico, he has since grown his business to fully wrought collections. If there is any discernible influence it is the '90s, but the way someone would interpret it from American television broadcast in another country: Bright, silly, and slightly scrambled. When we speak, he is wearing an "E! Entertainment" t-shirt that he got on eBay that looks to be a twin of a piece from his fall 2016 collection, a camisole with diamante straps that is half a promotional t-shirt from the 90s horror movie Scream and half a Marilyn Manson tour shirt. The effect is elegant, cheeky, and totally fabulous.

"You can tell all of my references are from TV. You have American culture in some way all the time coming through in Mexico," he says in his apartment slash work space on Ralph Avenue in Bed-Stuy. "I like that cheesy way of fashion. You know, BIG. I really like a lot that way." Barragán still produces all of his samples in Mexico City, doing fittings via Skype or making corrections over text. It is where all of his relationships are and where he feels he can get the clothes made the way he wants them, even if it's not exactly the most efficient production model. "I'm not really friends with other designers in New York. People are really competitive here. I know other people who make clothes but we're not close and don't really exchange ideas," he offers. He casts his shows mostly through Instagram and if he wants to collaborate with someone he will just DM. "In the beginning I was sending DMs to people, 'Hey would you like to collaborate.' At the beginning it was hard--people could be a little rude, they would say no or want money, and you just go on to the next one. And people here are always coming and going so you just go on to the next."

The burgeoning fan base he has cultivated in New York is not one distinct group; trans, gay, POC, white, latin, binary or non-binary, and the different intersections therein, are all represented. But whereas a certain self-seriousness pervades other fledgling New York design collectives, the philosophical and aesthetic progeny of the now comparatively establishment Eckhaus Latta, Barragán feels outside of that cul de sac. Perhaps it is his non-traditional education—though he wants to take a fashion business class—or the fact he has barely clocked a year in the city. Or it could be his humor and his very singular dialogue with sex and the Latin male body. But there is no question it is a point of view rarely, if ever, seen fully and undiluted in the New York collections and it could not be more thrilling to watch.