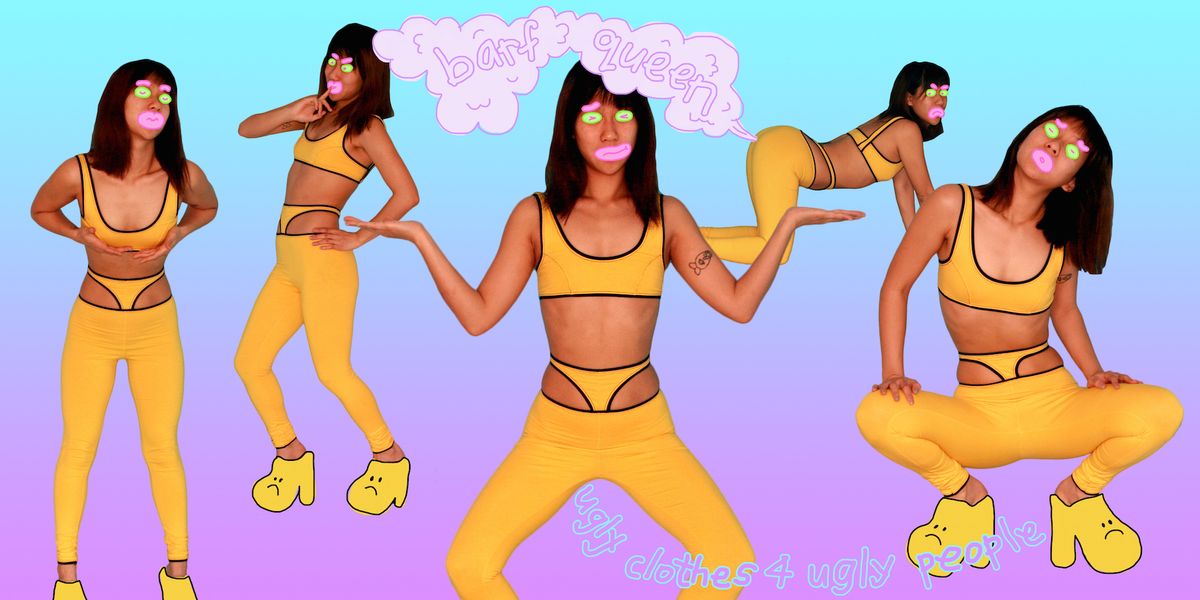 Another February, another NYFW come and gone. If this bi-annual parade of immaculately groomed genetic one-percenters with its litany of unachievable beauty mandates gets you down (black lipstick, we meet again), it's high time you met Joan Lee. This Los Angeles-based artist turned her attention to fashion in 2013, masterminding a line of "ugly clothes for ugly people" under the name Barf Queen (a nickname she earned in art school for her never-say-die approach to partying). The Barf Queen collection is an electrifying haute mess of oh-no-she-didn't cutouts, keyholes, and built-in whale tails, looking in the best possible way like a kinky activewear collaboration between Leigh Bowery and Ren & Stimpy. With styles like the lace-up Nouveau Slut pant suit and the #freethenipple Boo Bless dress, Lee uses anarchic humor and aggressive sexuality to confront arbitrary standards of beauty and "demystify body parts that [are ultimately] just bags of flesh." We sat down with the one and only Barf Queen to chat about her inspirations, donuts, her beautiful, dark, twisted fashion presentation at LA's Night Gallery, and using ugliness as a strategy for radical self-acceptance.

Your background is in fine art, what made you take the leap into fashion and what are your goals as a designer?

I was getting really tired of scouring dozens of thrift stores to put together outfits that represented me and my style, and at the same time I was also getting pretty depressed about [not having the space and resources] to work on my enormous sculptures after college. So I decided that making clothes as part of my sculptural practice would be a great way to kill two birds with one stone. As a designer, I want to develop garments that provide a strategy for dealing with the bouts of body dysmorphia and low self-esteem that stem from constantly looking at pictures of beautiful people leading perfect lives on various social media platforms. That's where the slogan/motto/mantra "ugly clothes for ugly people" comes from -- it's my way of reclaiming and celebrating ugly.

What was the first thing you ever made as Barf Queen?

That's kind of a tough timeline. I've been Barf Queen for a while, and there was a long period of time when I was making clothes for myself to wear to parties and clubs, but I think the first thing I made after I decided these two things existed together was a vinyl hairy nipple shirt and hairy vinyl skirt set.

What is the Barf Queen aesthetic? Who and what are your influences?

The Barf Queen aesthetic is ugly, cartoony, and non-stop pranks. I was always a huge fan of [contemporary artist] Paul McCarthy's early videos, and I had the opportunity in college to hear him give a talk about his work. He said something (I don't really remember the context) that always stuck with me: hygiene is the tool of fascism. I really related to that statement, and I think it's something that continues to be important in my work. I think also that part in Clueless where Cher and Dionne refer to Amber as a Monet because she looks good from afar but is a total mess up close is a quote that has always been very important to my work. I think there's something really intriguing about ideas of beauty in both those statements that I am continually trying to grapple with.

Your line makes a point of exposing body parts in a very frank, and gleeful manner -- can you discuss the role of T&A in the Barf Queen line?

I think the T&A in my clothing stemmed from my sort of confrontational way of dealing with feelings of physical inadequacy. So for example, if I'm feeling fat, I'm going to try to challenge myself to show my stomach. This act forces me to accept my body, because I can only suck [my stomach] in for so long before I get tired and having my gut out all day kind of strips it of that power it had over me. I think our fixation with really specific body parts is so strange and kind of grotesque. Like thighgap, or thighbrows, or whatever the next bodily fixation will be. It's really psychically damaging to try and navigate the world when these trending body parts are given such power, and your body parts don't match up. So for me, exposing overly-sexualized or politicized body parts in a matter-of-fact and silly way is to strip those parts of their individual powers, which de-objectifies them and turns them back into parts of a whole.

Last September, you brought the Barf Queen-o-verse to life in a wild show at LA's Night Gallery, fusing fashion with performance, video, illustration and high-octane energy drink cocktails. Can you describe the elements of your show to our readers, and discuss the vision behind it?

At the Run(a)way show at Night Gallery, I had a blue and green balloon arch at the entrance of the space with a custom barf cake (provided by Charm City Cakes West, AKA the Ace of Cakes) sitting right under it. Through the archway were two projections of promo videos for the line: one of a girl in a blue and pink outfit popping green balloons with a pink cigarette, and another of a hairy man wearing a dress with boob cut-outs pouring milk all over himself. Between the projections was an energy drink cocktail bar by Steph Russ, serving up drinks spiked with Monster and 5 Hour Energy from her amazing book Energy: Cocktails to Get You UP. On the opposite side of the archway was a kiddie pool fountain full of fruit punch Kool-Aid, with another video projection of a girl in an all-white outfit that revealed only her face and buttcrack, spinning slowly as she gets sprayed by Silly String. Near this video projection was a girl in a similar outfit spinning around and wailing.An opening in the wall led into a bright slime-green painted mini "store" where clothes were displayed on walls covered in a spray-painted mural of dancing, pissing, and defecating ladies with long wiggly limbs.

Several performers walked around the space throughout the night, being confrontational, encouraging attendees to eat cake out of their hands and drink the kool-aid out of the pool, photobombing people, taking selfies, dancing, popping balloons on their bodies, etc. I really wanted the whole night to feel like you stepped into a deranged cartoon that you didn't want to escape because you could be gross and bad and drink the kool-aid and revert to some bizarro version of yourself where you might throw cake at someone.

How do you think living in Los Angeles has impacted your work? Where are your favorite places in the city?

It's really hard to say because I grew up in Los Angeles, moved away for school, and came back but maybe in some way I never really stopped being an "LA girl" and I think that has always manifested in a love of bright colors.

To be perfectly honest I don't leave my house/studio a whole lot but when I do it's mostly to eat, haha. I have a really bad donut habit. My fave spot after midnight is Ms. Donut at the side window when the night baker shows up to make the next day's batch. Those hot fresh donuts are so delicious, I'm drooling right now. It's amazing how happy that night baker is. I'm incredibly jealous, and I think part of me hopes that eating his donuts will transitively imbue me with that same joy.

If you could dress anybody, who would it be?

It would be my dream to dress Dolly Parton or Cher. I worship them both because they are complete divas who have never been afraid of making bold visual choices.

What projects are you working on now, and what's up next for Barf Queen?

I'm kinda messing around with some ideas of what the more "mature" version of the Barf Queen aesthetic would look like. What would it look like if Barf Queen was 40? What changes? WOULD anything change?

But, I'm also consumed with decorating my apartment, which fits in very well with another interest/passion of mine: production design and art direction.