Bar of the Week: Fort Defiance 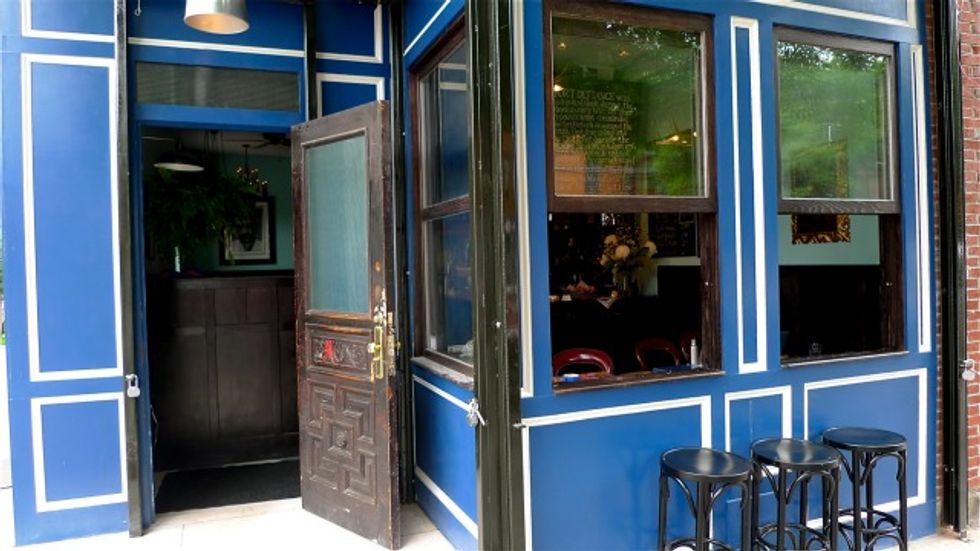 Now that the pesky business of liquor license-obtaining is out of the way, St. John Frizell's vision of a place where Red Hook locals can caffeinate before and self-medicate after another day at the daily grind, has slowly become a reality. Fort Defiance is an effortlessly charming spot with pale robin's egg blue walls covered in artwork from Frizell's travels to Mexico, Bolivia, and China. Mexican oilcloth-covered tables -- the work of his wife Linden Elstran -- provide bright pops of color, while the wine-colored leather and wood chairs were a lucky acquisition from a St. Louis Playboy Club. With the State Liquor Authority's long-awaited blessing, Fort Defiance, which has been brewing individual cups of Counter Culture coffee ($2) since mid-June, can finally showcase a few things Frizell picked up in his stint behind the bar at Pegu Club and in his years spent writing about and researching the almighty cocktail. Shying away from what he sees as the "decadent and perverse" place the cocktail revival has found itself, Frizell has made ease of execution and enjoyment his signature, while keeping things interesting by serving his drinks with a side of history. The Colonial Cooler ($8), uses a recipe circa 1926 from the Sandakan Club in British West Borneo to deconstruct and rebuild that summery British favorite the Pimm's Cup (without the Pimm's), while the Prescription Julep originated as joke drink recipe written in medical Latin from a 1857 issue of Harper's Monthly. Lunch selections like the muffuletta ($9) and banh mi ($9) offer something new to Red Hook, and the small plates (try the creamy deviled egg sprinkled with salt crystals and cayenne; $3) currently offered in the evening will soon be rounded out with one or two dinner entrees.