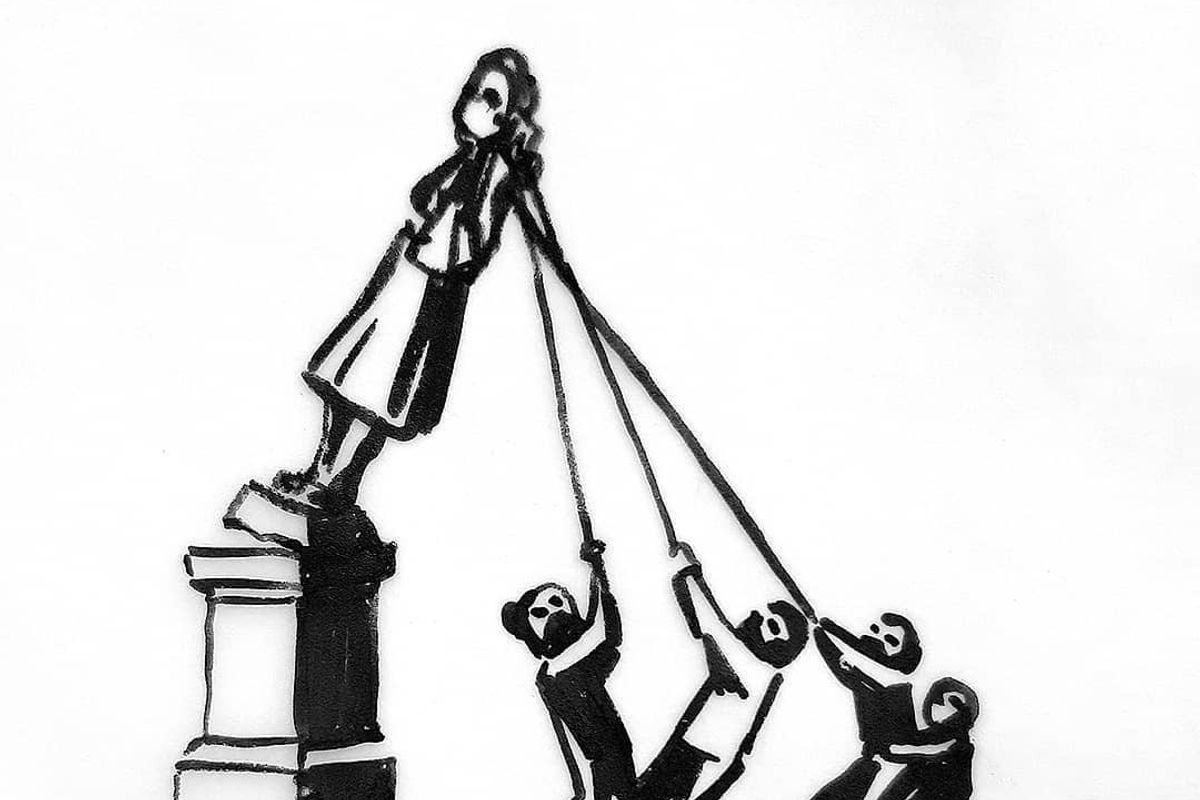 Banksy Has an Idea for Replacing Toppled Slave Trader Statues

The Western world has long been pockmarked with statues and monuments commemorating legacies of colonialism, systemic racism and violence directed at Black people. Whether statues of Confederate soldiers throughout the US or that of wealthy slave traders in the UK, many cities and communities are finally reckoning with these symbols of hate. From a Gen. Robert E. Lee monument being defaced and removed in Richmond, Virginia to a statue of slave trader Edward Colston toppled in Bristol, UK this week, it is evident that people worldwide are tired of seeing these symbols, and are ready to act in order to remove them.

Banksy was one of millions who watched Bristol's statue of Edward Colston crash down during a Black Lives Matter demonstration on June 7. Yesterday, the anonymous artist weighed in on the matter in an Instagram post. In the caption, Banksy shared an original idea for what Bristolians can do with the empty plinth in the city where the statue used to stand. It's an idea that they write "caters for both those who miss the Colston statue and those who don't."

"We drag him out the water, put him back on the plinth, tie cable round his neck and commission some life size bronze statues of protestors in the act of pulling him down," Banksy writes in the caption, "Everyone happy. A famous day commemorated."

The street artist shared an original sketch of their plan. The proposed monument depicts protestors tearing down the original statue, highlighting the initial monument's celebrated fall.

The statue of Colston, the 17th Century British merchant and Tory Member of Parliament, was erected in 1895 to commemorate the slave trader's "philanthropic" career. Since the early 1990s, campaigns have advocated for its removal, making its ultimate toppling all the more historic.

Bristol mayor Marvin Rees recently said that it is "highly likely" that the statue will be retrieved from the harbour and placed in a museum: "What's happened to this statue is part of this city's history and it's part of that statue's story," he said.

After watching the monument collapse, Rees also added, "I can't pretend, as the son of a Jamaican migrant myself, that the presence of that statue to a slave trader in the middle of the city was anything other than a personal affront to me and people like me."

Banksy also shared an anti-racist painting to Instagram on June 6, paying homage to George Floyd and other Black lives lost due to police brutality and systemic racism in the US and beyond.

The artwork depicts an American flag hanging over a framed picture of a blurred face, implying that someone has died. A candle and flowers are seen laying next to it. Only the eyes show in the moving painting.

In one of the slides, Banksy shared an artist statement along with the painting, explaining that they initially thought they should listen to Black people during this time, but found it imperative to use their platform to speak out against injustice:

"At first I thought I should just shut up and listen to Black people about this issue," Banksy writes. "But why would I do that? It's not their problem. It's mine. People of colour are being failed by the system. The white system."

Banksy continues, using an analogy to make their point. "Like a broken pipe flooding the apartment of the people downstairs. This faulty system is making their life a misery, but it's not their job to fix it. They can't — no one will let them in the apartment upstairs. This is a white problem. And if white people don't fix it, someone will have to come upstairs to kick the door in."