Band of Outsiders on an Uncharted Desert Isle

The Band of Outsiders show was a welcome escape from the perpetual drizzle that has been plaguing New York as of late, and not just for the beach and sunshine themed presentation at the Milk Galleries. It was as though the very well dressed children of Ginger and the Professor had decided to throw a party for a new group of friends, who, as luck would have it, just happened to crash land on the island -- LP player and their favorite Beach Boys album intact -- right in time for the festivities.

The outfits themselves were far more Nantucket than Gilligan’s, with some favorites among the boat-shoes-without-socks looks including the gabardine double-breasted blazers with oversized buttons. The one button navy worsted tuxedo, powder blue ruffled shirt, and small black bow-tie combination could have veered dangerously close to my father’s wedding tuxedo from 1976, but it didn’t, largely thanks to Band of Outsiders’ understanding of structure and proportion.

Most of the men donned Team Zissou caps -– highly appropriate, considering that Jason Schwartzman, a regular in Wes Anderson’s films, was among the crowd. On a personal note, I take my hat (or, in this case, Zissou Cap) off to whoever shoveled that much sand onto the ground floor of the Milk Galleries, to those who’ll be shoveling it back out, and to Scott Sternberg, whose collection was both dapper and fashionable -– a difficult course to navigate, here on Manhattan Isle. 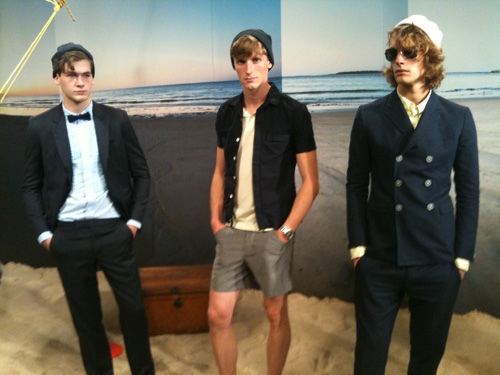 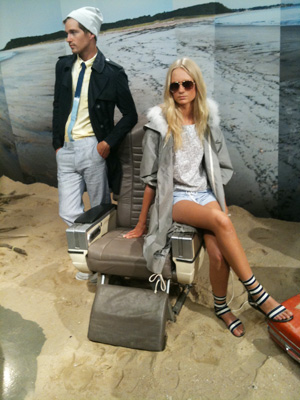 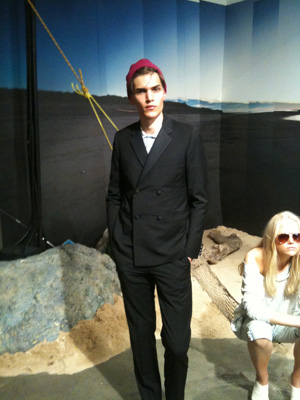