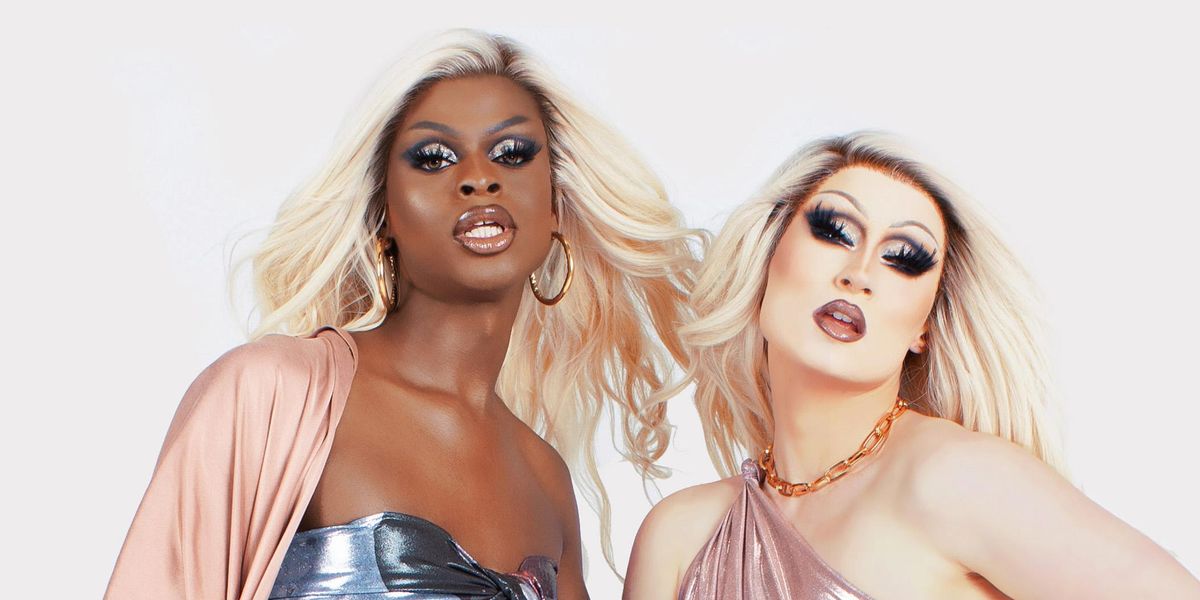 "Drag Race for me is my Super Bowl, like if I were a straight who was obsessed with football or something," says Scott Studenberg, the designer of Baja East, of the long-running reality show. So when the time came to cast the lookbook for his latest collection, he jumped at the opportunity to include two of Season 13's fan-favorites: Symone and Gottmik.

"We did the fitting before the finale and then two weeks went by before we could actually shoot," he says of the lookbook, which also stars male model Christian Arciga and was styled by Marta del Rio. "So, this has been something I'd been wanting to do for a really really long time."

The concept behind the shoot was a confluence of '90s supermodel imagery and vintage Versace ads, which Studenberg says he's long been obsessed with. To wit, Symone and Gottmik recreated several iconic fashion moments, including a Richard Avedon-lensed 1997 Versace Jeans ad. And in another look, the posing recalls a Versace Fall 1993 campaign starring Stephanie Seymour and Marcus Schenkenberg. The short blonde wigs, meanwhile, are a reference to Linda Evangelista while the longer styles are a nod to the likes of Claudia Schiffer.

On a personal level, one of Studenberg's career highlights took place last year when he fronted a cover of Out magazine alongside Shea Couleé. "The messaging there was about how I felt like drag queens in a way have always been put in this box of not fashion. And they are fashion," he says. "These queens turn it on the runway and they're so inspiring. You have all these queens that give you fashion and Gotmik and Symone this season were breathtaking."

As for the collection, which was inspired by the Big Sur coastline, Studenberg revisited many of his brand's classics, from the running horses motif to sweatshirts, leopard prints, tie-dye and crushed velvets from his archives. He also introduced some sexier looks such as semi-sheer body-con gowns and velvet stretch bodysuits with matching cropped long sleeve tops and slit skirts finished with crystal embellishments and fringe. A selection of pieces from his Eddie Bauer collaboration are also included.