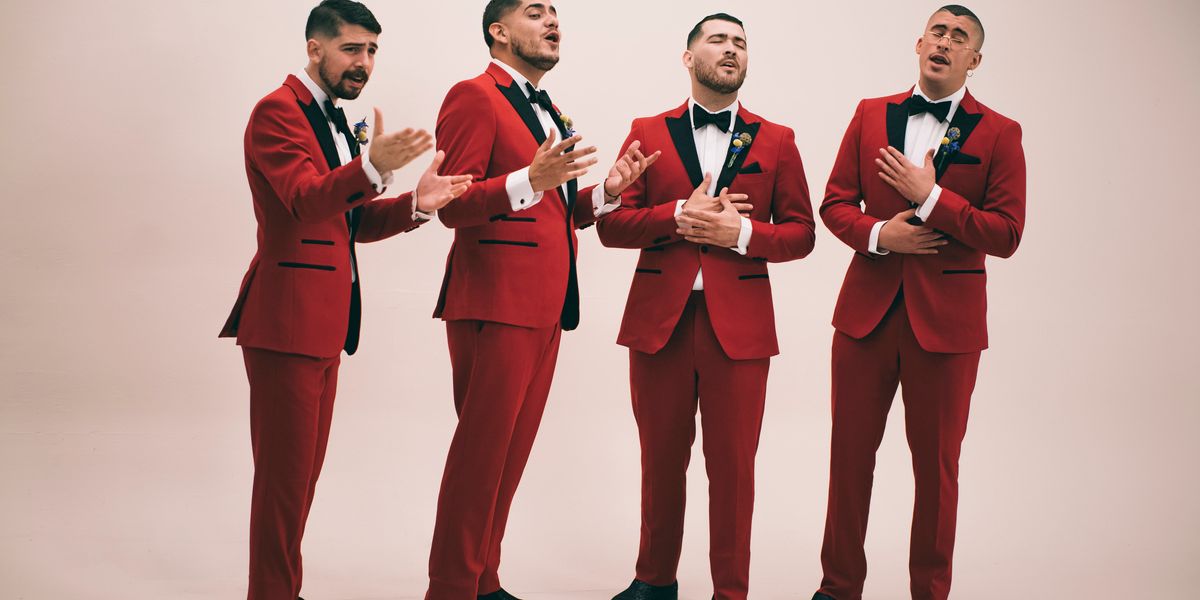 It was almost a year ago that Los Rivera Destino first caught Bad Bunny's attention: He loved their viral bolero take on "Te Boté Remix" (originally a Nio García, Casper, and Darell hit upgraded to include Latin trap stars Bad Bunny, Ozuna, and Nicky Jam) so much he featured the Puerto Rican band's video on his Instagram. From there, the relationship with el Conejo Malo evolved into a DM exchange, an in-person meetup, then a feature in the video intro to his landmark San Juan homecoming shows this past March.

Little did we know, however, that from this blossoming friendship there also grew a wholesome collab — a Father's Day tribute called "Flor," premiering today on PAPER — that simultaneously marks Bad Bunny's musical debut under his birthname, Benito Martínez.

Los Rivera Destino, formed in 2013, has long since employed a flower in its logo, as a way of referencing sensitivity and emotional depth. On "Flor," though, the band reiterates that sentiment, and extends it to stress the flexibility of the paternal figure.

"We wanted to celebrate good fathers, and the fathers who aren't fathers by blood, but are paternal figures for people who don't have a father in their household," LRD member Carlos Figueroa says.

"It could be your abuelo, your abuela, your mom, your dad, your uncle," adds bandmate Antonio Sánchez. "We talked about all that when we first met up."

At that early 2019 meeting with Bad Bunny, during which the concert appearance was also discussed, it was Benito who originally pushed the bolero idea, Los Rivera Destino note.

Carlos recalls, "He wanted to sing, as opposed to a trap song like he usually does. He wanted to sing and get out of his comfort zone. I think that was the principal idea from the beginning."

The video offers a slow reveal of the band along the opening croon, "You too are a flower, delicate, that sometimes hides," revealing the trio looking dapper in wine-red suits and black bow ties. Against crisp pastel backdrops, characters representing paternal figures — grandparents, two fathers smiling as their daughter, facing a mirror, draws on a mustache, and others — float in and out of view.

Pan to Benito, a matching fourth member, whose signature baritone has turned subtly syrupy, fitting smoothly into the song's overall tone. "Time has passed and I've grown, but I'm still learning from you," he sings. "No tutorials on YouTube exist that teach how to be more like you."

Co-produced by Ismael Cancel (of Puerto Rican hip-hop act Calle 13) and realized with vocal coaching form Ileana Cabra (who performs as iLe, along with Carcel, and was also in Calle 13), Los Rivera Destino handled all the guitar work and lyrics -- but Benito personally wrote his own verse, the band says.

Tight schedules allowed only two weeks' time to film and produce the video for "Flor," yet under the direction of Claudia Calderón, the result is expertly manicured to the song's emotional intelligence, and smartly delivered with a wink of whimsy that makes even more endearing the song's unabashed sentimentality.

Watch the full video for "Flor." below.

The musicians of Los Rivera Destino, while widely known for their creative covers (watch their video for Daddy Yankee's "Dura" turned cha-cha, featuring local drag performer Nico T.), are currently working on more numbers like "Flor" — not boleros, per se, but collaborations with other artists — in hopes of soon releasing an EP or full-length album of all original songs.