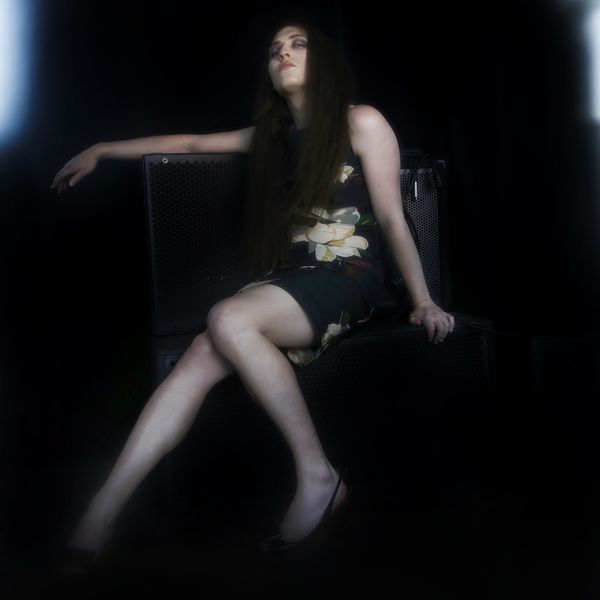 Baby Blue Would Like to Put You in a Trance

One of my first experiences hearing Baby Blue's music was at a club in Shibuya as I descended the stairs to a pitch-dark dancefloor, chasing the sound of a familiar refrain. "Music... makes the bourgeoisie... And the rebels... " But instead of the classic Madonna track I was expecting, this time the pop legend's vocals were backed by pounding drums and harsh industrial modulation. The edited track did what some of the best club music does: throws a stick of dynamite inside your ears and lights a conflagration in your skull, giving you no choice but to lose control and dance.

Other edits and tracks by Baby Blue have been featured in sets by DJs like Juliana Huxtable and Kanye West collaborator Evian Christ. She's won over fans including artists Yves Tumor and Björk collaborator Rabit, who is also known as the founder of the label Halcyon Veil, which releases experimental and electronic music by queer artists from around the world. Recently she's created mixes for TANK, as well as Apple Music as part of their Pride Month initiative showcasing LGBTQ+ artists. Now, with the release of her debut album Death of Euphoria and a European tour where she'll play at such iconic venues as Berghain in Berlin, Baby Blue is ready to, in her own words, "take-over the world and elevate human consciousness to another level of understanding, and usher in a new era of beauty physically and spiritually."

If you think her name sounds familiar, maybe from a single called "Dandi" released last year on Halcyon Veil, she'd like to remind you that "Death of Euphoria is the first Baby Blue release. Everything else you hallucinated." In her own words, the title Death of Euphoria is "a goodbye to playtime, the highs of not taking responsibility of your life and the acceptance that you have to take accountability for the chaos around you in order to be a functional human."

This theme of rebirth and reinvention is a driving force behind Blue's modus operandi, as she finds herself constantly experimenting with new sounds and techniques to liven up dancefloors and ignite people's souls. "Every-time I go to DJ, I treat it like the first time I've ever DJed. I'm a phoenix that is constantly being reborn better and better than the last." It makes sense then that Blue finds kinship with another star known for change throughout multiple eras. Combined with the popularity of her "Music" edit, Blue has earned herself the nickname of "techno's trans Madonna" in the underground electronica scene. "BITCH, I'M LOCA! I have a high standard for resurrection and death, and Madonna is the only figure in art and culture who has always carried those spiritual values. She is the greatest artist of all time and I really identify with that."

"I am fighting for everyone by simply existing in the public eye."

Much like Blue's mixes, Death of Euphoria works best taken in as a whole, passing from moments of blistering intensity to astral serenity. "Collapsed" sounds like an early 2000s eurodance classic flayed alive and stripped to the bone, while the track that follows it, the 10-minute ambient voyage "I Hold U" feels like the soundtrack to a body being regenerated in slow motion, cell by cell. Listening to Blue's music, I always feel a strong emotional arc, but she claims that any sense of narrative is entirely incidental, a byproduct of engaging with her own life experiences through her art. "Narrative is never intentional in my work, it sort of just happened." she says. "This album mirrors what I was going through internally, and bringing a voice to that pain and the fact that people can feel it vibrationally, is an honor."

Citing the Jewish mystic tradition of Kabbalah as one of her creative inspirations, the music on Death of Euphoria is veiled in sacred mystery. "Music at its best is divine language being transcribed from within the soul," she says. Blue's creative process is similarly spiritual. "I meditate to ancient deities while I play seven different frequency tones and audios on DNA Repair healing on YouTube at the same time and I commune with my guides and I wait for them to whisper the secrets into my ear. The songs I am most happy with come from when I enter a type of flow-state." On Death of Euphoria, all of the tracks emerged from one of these trancelike episodes, each taking less than an hour to create.

Listening to Death of Euphoria, Baby Blue's audience will find themselves transported to a variety of abstract headspaces through her unique sound design and arrangement. On the lead single "Visage of Truth," odd blips panned between ears disorient your sense of space while a crushing, steady beat seems to tear down the walls of whatever room you happen to be in, revealing a new world on the other side.

Few DJs occupy a space between sweet pop ecstasy and the avant-garde fringe as effortlessly as Baby Blue. Few can make a transition from Kylie Minogue into the experimental artist 703863437 sound so natural. But in addition to being known for her art and talent, Blue wants to be a reminder to society and the music industry of the diversity of trans women, and their resilience and staying power in a world that all too often seeks to silence or ignore them.

"People need to know that I am not going anywhere," she says. "I am a trans woman like any other. There are so many different types of trans women out there and we aren't going anywhere. We are here and ready to be seen. I am fighting for everyone by simply existing in the public eye."

Death of Euphoria is out now on Ascetic House.