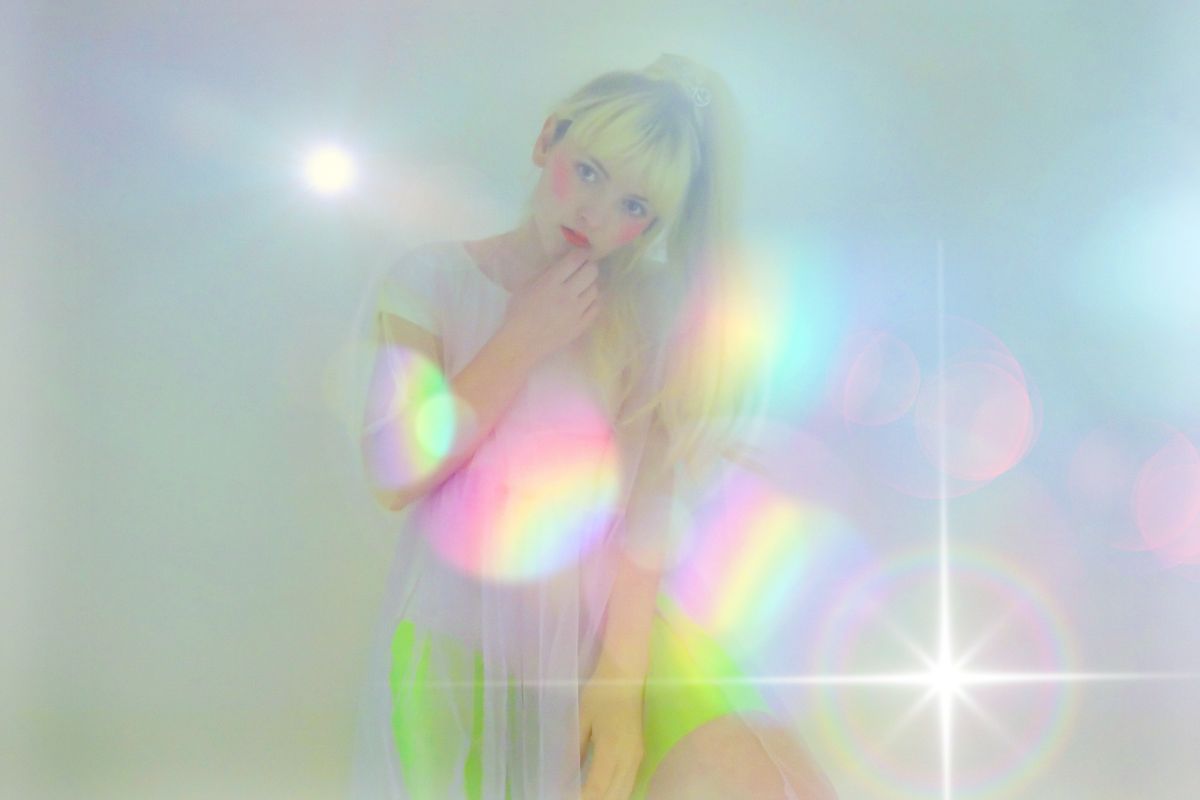 Beneath a thick layer of digital glitter and holographic lipgloss exists the world of Margate-based artist, BABii. Her effervescent brand of pop has been likened to that of Grimes, Purity Ring, and FKA Twigs, but still manages to inhabit a unique world of its own — one that is full of doubled 'ii's, rave-inspired hieroglyphics, and Sailor Moon-esque fauna.

It should perhaps come as no surprise that BABii is a contemporary of British producers and known troublemakers, IGLOOGHOST and Kai Whiston, two artists who have each used their cartoonish approaches to boundary-pushing electronic music as a soundtrack to their own respective lore-rich worlds. BABii is no exception, constructing a vivid world around her songs firmly grounding all of its eccentricities in a landscape of her own design.

Following an intense run of shows at SXSW, the hype surrounding BABii's debut album, HiiDE, has been steadily building. Out July 5th, the album unintentionally arose from the ashes of a dying relationship kept on life support and a life seemingly falling apart. Centered around themes of hiding and secrets being kept, HiiDE draws from a broad range of inspirations that include everything from JoJo to the Disney's Pocahontas soundtrack and even shiny Pokemon cards.

In a taste of what's to come, BABii has now shared the second single off the forthcoming record, "CARNiiVORE," a shimmering synth-drenched bop that fuses glitched out vocal samples with deep expansive bass. We caught up with BABii in cyberspace to chat about the song's inspiration and actual carnivores ahead of the PAPER premiere.

What was the inspiration behind "CARNiiVORE?"

This was one of the first songs I wrote for HiiDE. It continues the theme of a few songs I wrote before it, that used animal predators as metaphors for how I was feeling like prey, in full survival mode, but kinda up for the battle. The song is about falling in love with someone even though you know they are gonna hurt you, like a prey animal falling in love with its predator.

When I first started making it, it sounded like absolute garbage and it sat there for a while, but I ended up being persistent and I worked on it so much I ended up liking it. The process almost fits the theme in a way, persisting on something that's not good, but in the instance of this song, it worked out. I think it would be funny one day to drop all the original versions of these songs, they are not very good at all.

✧ﾟ: *✧ﾟ:* It's less and a 'who' and more of a 'what'. I get inspiration from lots of different things. "CARNiiVORE" is a good example actually, the inspiration for that came from watching to many brutal nature videos on YouTube of animals fighting to the death. At the moment I like designing what inanimate objects would sound like and what there emotions would be. The other day I was making a song with IGLOOGHOST, and all the words were written from the perspective of a Geodude Pokemon card, wanting to be a shiney card, although the underlying tone was about wanting to be special. *:ﾟ✧*:ﾟ✧

What would you say is the most ideal environment to listen to the track?

☆.。.:* If you want to have a 4D experience then sitting on the side of the motorway on an cold overcast day, broken hearted, drinking a mug of blood while watching some wolves maul a deer to death, would probably be best. .。.:*☆

BABii on Instagram: “I MiiSS MY DOGS BUT ii AM EXCiiTED ABOUT PLAYiiN SOME SONGS TODAY”

Who are your Top 5 meat-eaters?

I know this single is off your upcoming album, is there anything you can reveal about it?

The whole album was a way of me crying in a constructive way, so it's sad in a lot of places but I also had fun producing it so it's kinda sad and fun at the same time. You could probably dance to it as well as cry about your ex at the same time. Its all about hiding and I wrote it in secret.