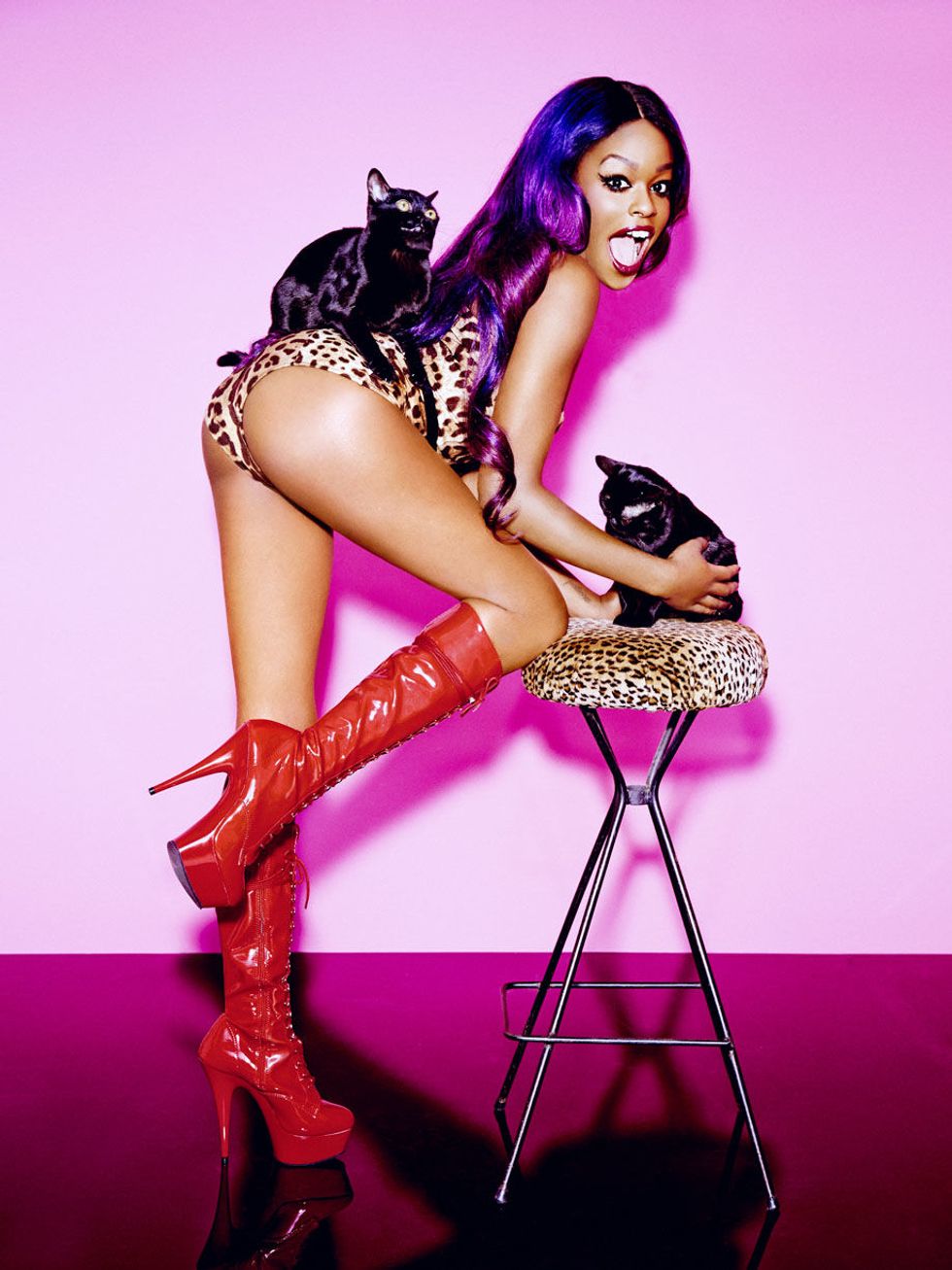 Azealia Banks Talks to Playboy About Pretty Much Everything

by Gabby Bess
PAPERMAG
Image via Playboy
When Playboy announced that Azealia Banks was set to cover their annual Sex and Music issue and give a "no-holds-barred" interview, we were expecting that in more of the PR-speak sense and less of the literal sense. It turns out that Banks' Playboy interview is as candid and unrestrained as her Twitter feed. Alongside an interview with Dick Cheney and a surely hard-hitting exposÃ© on the deep web, Banks' thoughts on race, feminism, witchcraft and "sexy Playboy stuff" pack all the more punch in Q&A format. She also opens up about an abusive relationship she was in when she was 17.

Like most things Azealia Banks says, there's a relatable element to them, an element of truth -- she's speaking to black women and girls who shouldn't be afraid to own their power -- but there's also a WTF moment. She'll make an astute comment on race like, "When you rip a people from their land, from their customs, from their culture... People will be like, 'Oh, you're ignorant because you don't speak proper English.' No. This is not mine. I don't even want this shit, so I'm going to do whatever the fuck I want with this language." And then she'll underscore it with, "I'm going to call you a fag or a cracker or a bitch." Which marks the point where it's hard to fully get on board with Azealia's revolution. Nonetheless, here's the best quotes from Azealia Banks' "uncensored" interview, below.

What's the longest relationship you've had?
Four years. It started when I was 17. He was 43. There's something very wrong with a man that age who wants to date a 17-year-old girl. I didn't know how to shave my bush and shit like that. I had a hairy pussy. I didn't know how to wear perfume. I had neon pink barrettes in my hair. And as "212" started to pop off and my career started to happen, he became jealous. He choked me and beat me up, and of course you should not be fucking with a man who puts his hands on you, but I was stupid and young.

Did that relationship cure you of your attraction to older men?
No, I love older men. The things in an older man's house are better--his furniture, even his knives and his pots. And they smell better. Young guys, they may skip a shower and shit like that.

On black artists and "respectability politics":

Is there someone whose career you'd like to emulate?
Jay Z. That's the only person I have my eye set on. The race thing always comes up, but I want to get there being very black and proud and boisterous about it. You get what I mean? A lot of times when you're a black woman and you're proud, that's why people don't like you. In American society, the game is to be a nonthreatening black person. That's why you have Pharrell or Kendrick Lamar saying, "How can we expect people to respect us if we don't respect ourselves?" He's playing that nonthreatening black man shit, and that gets all the white soccer moms going, "We love him." Even Kanye West plays a little bit of that game -- "Please accept me, white world." Jay Z hasn't played any of those games, and that's what I like.

On being perceived as an "angry black woman":

If people don't like you, does that mean they're racist?
No, not at all. There's misogyny, and then there's something called misogynoir [a term coined by writer Moya Bailey to describe "the unique ways in which black women are pathologized in popular culture"]. We have all these stereotypes in society: The gay man is a faggot and he's over-the-top, or you're an untrustworthy cracker, or you're a loud black bitch. All these things exist for a reason, you know what I'm saying? Yeah, I am loud and boisterous.

And you are black.
And I am black, and I am a pain in your ass. But I'm not really talking to you, and that's what makes those people mad. You're not invited to this conversation. This is not about you.

On getting what's hers:

"I get upset when people are like, "Why don't you just make music?" What would happen if I couldn't sing? Then I'd just be another black bitch to y'all. It's really fucking annoying. Black people need reparations for building this country, and we deserve way more fucking credit and respect."

On solving problems with witchcraft:

You said black people aren't supposed to be Christians. What religion do you identify with?
I don't want to say, but I'll tell you about one form of the religion. It's called 21 Divisions. When they brought the slaves over to the Caribbean, they syncretized all their African gods with Catholic saints. So in 21 Divisions there are black gods and goddesses, and my mother practiced that when I was little. Whenever problems happened, we turned to 21 Divisions to fix it. It's funny, because my friends on the block in Harlem, their mothers would be like, "Oh, you fucking with that witchcraft. You working roots." You can cleanse people with root work or do bad things to them. But 21 Divisions is celestial.

"I like to feel them out, and then I start talking about my black female problems, and we get into a conversation about race, and then we disagree and don't have another date. Whatever. I'll just hang out with my mother. It's okay, because pussy is way more sacred than penis."