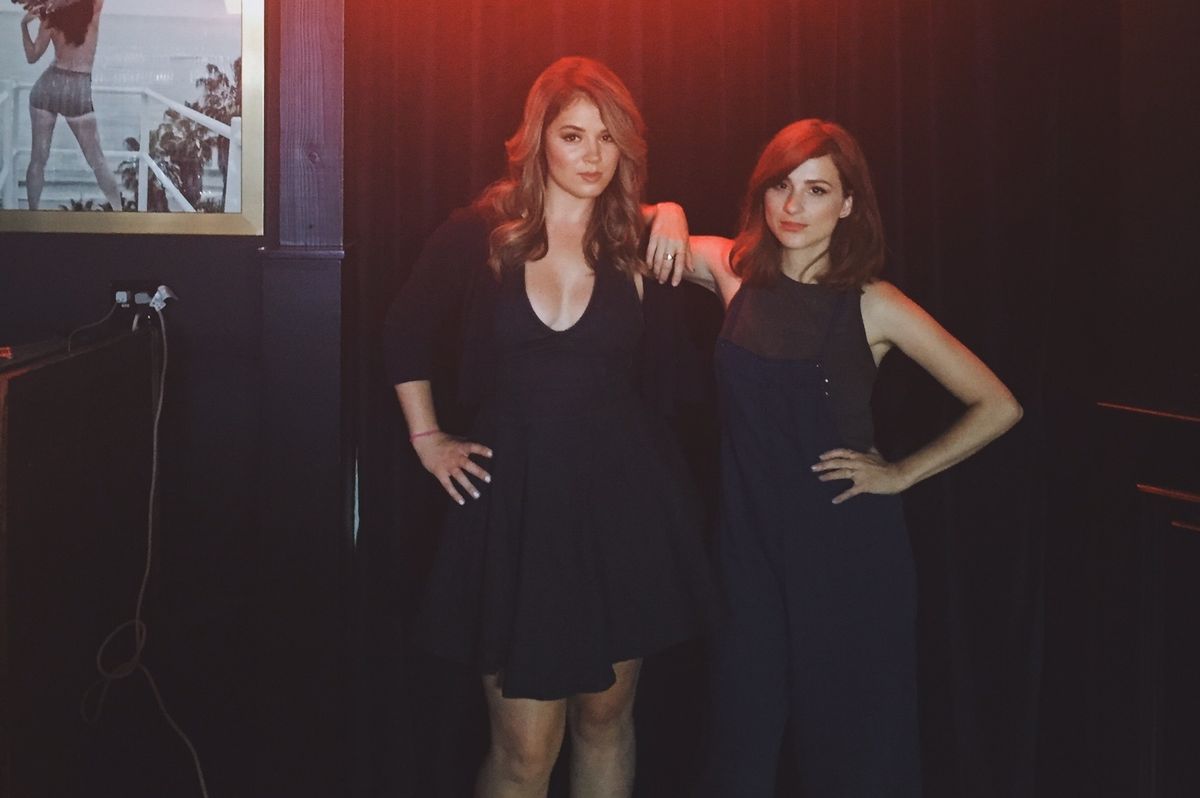 Aya Cash and Kether Donohue of 'You're the Worst' on Marriage, Friends with Babies and the Beauty of Brokenness

On FXX's anti-rom-com runaway hit You're The Worst -- returning to television for its third season tonight-- Aya Cash's character Gretchen Cutler and Kether Donohue's Lindsay Jillian are best buds whose antics range from self-centered to downright terrible. Their friendship with one another, however, never waivers. Even in the show's first season, when Gretchen catches Lindsay drunkenly smooching her love interest, the confrontation that follows sidesteps judgment or betrayal, opting instead for a catharsis of mutual failures and fears.

In real life, Cash and Donohue are just as close.

"We balance each other and I think that's true of Gretchen and Lindsay too," says Cash. "Kether is going to be Kether in every situation, and I can always count on that as her friend. She's incredibly loyal."

Like their characters, Cash and Donohue's bond has helped each other through personal lows off-screen.

"This past year, I was in the darkest depression," says Donohue. "It sounds so dramatic, but it's true. Aya changed my life because she was one of the few people that I rawly opened up to -- and she didn't run away. Her words and actions are in harmony. That's a big deal."

We're standing in Los Angeles' Museum of Broken Relationships, which felt like the perfect place to interview the stars of a show known for its own wry take on amiss relationships. The main gallery looms with hundreds of objects on display, the painful detritus leftover from break-ups and given to the museum by anonymous donors looking to clean away the cobwebs. Each item -- from a wedding dress shoved into a pickle jar to an empty toothpaste tube -- is bequeathed to its own pedestal with a typed contextual story of love gone awry.

Cash and Donohue are also friendly with the the museum's director, Alexis Hyde, and, later, we invade her office for our chat. Perhaps it is the emotional frequency of the museum, but Cash and Donohue gamely dive right in to a candid conversation with Hyde and I about marriage, death, Tinder and friends with babies.

My take on You're The Worst, is that your characters resist relationships because they are pulled by a larger existential dilemma, a resistance to aging and death— like, you move in, get married, have kids, and die. I wonder if you feel this in your own lives?

Kether Donohue: It's strange. You can have success in the external world, but internally, you're shattered. I'm with someone now, but before— all my friends were in relationships or buying houses, doing grown-up things. While I have a wonderful career, and I'm successful in that realm, I wasn't feeling like an adult on the inside. It was constantly being reminded of my own mortality— fear.

Aya Cash: I'm super aware of death. You get to a certain point in your life and you think, 'Am I doing this because it's how I want to live my life or because this is what we're told we should do?' It's something I have to constantly reevaluate.

Donohue: In the midst of my depression, I told Aya, 'I don't want to be vulnerable anymore.' I was living in a traumatic state. She said to me, 'just because someone else couldn't handle your vulnerability, that doesn't mean you stop.' Stephen [Falk, creator of You're the Worst], was also an inspiring force. When I confided in him about my depression, he said, 'Remember Lindsay's advice to Gretchen in Episode 7 of Season 2: 'Wear the stains on the outside of my clothes.' Both he and Aya reinvigorated my belief in the power of vulnerability. Things matter. As humans, we want to think we are investing in something. What's it all for?

Cash: And that's not an answerable question. So, what you do with that question is my question?

Cash: I have to choose not to ask that question because I can't live that way. It's debilitating.

Donohue: When you have genuine present moments of joy, you're in such a beautiful state that this question doesn't even matter. So, maybe that's the purpose.

Cash: I'm going to call this movement Buddhism. [Everyone laughs].I name it BUDDHISM!

Cash: My dad is a Buddhist priest so.

Cash: He used to sit me down and make me meditate with him. We'd look at each other and he'd say— I'm not your father. He wanted me to see him just as a person. And, he'd look at me like not his daughter.

Cash: So, by the time I was fourteen, I was like— You're not my dad!

Cash: As a culture, overall, I think we value interpersonal relationships above most— like, Alexis, you're single.

Hyde: I'll let you play with my Tinder when we're done.

Cash: Everyone expects you to be actively looking—or else something is wrong with you.

Hyde: Most of my hours are at this museum. When I do look, it's vastly unsatisfying. The problem is sometimes you just don't find people. You know, I'm wrapping my head around that. It's fine. But, people's knee jerk reaction— Oh, you'll find someone. Well, no, that's not true. I might not.

Cash: Or you might find someone who is amazing for a few years and then not. But, this idea of a forever person . . .

In relationships, and especially in marriage, you hear the word "compromise" often. What does that word mean to you?

Donohue: It's romantic. It says, you matter to me— therefore, I'm willing to create a new way of looking at the situation. I think it involves sacrifice.

Cash: In college, I read Letters to a Young Poet and I remember this idea of two whole people coming together and creating something outside of themselves as opposed to two halves trying to make a whole. I don't know if compromise always entails sacrifice. It's not so much about giving something up, but shifting perspective.

Donohue: It's a creative act.

Hyde: My compromises are with my friends who are in couples having kids. Their priorities have shifted, but mine have not. Our compromise is, ' I'm going to see you at 7 p.m. on Monday because that's when the baby's asleep.'

Cash: Why would people do that? Have kids and shorten their fun time? [Laughter.]

Hyde: I'm like, 'Okay, I'll accommodate you. Maybe you'll accommodate me? Maybe you would have gone to sleep earlier because you didn't sleep the night before because of said kid, or whatever.' We have to redefine our time together.

As you get older, do you find it's harder to stay friends with people who have different lifestyles than you or people who still engage in a lifestyle you once had?

Cash: I feel deep sadness each time a friend tells me she's pregnant for selfish reasons. I don't engage in the same way. I assume their things are more important than mine, so I don't invite them out. I don't want them to feel bad if they can't come. It's a weird walking on eggshells. I'm sad that I feel this way— like I won't see them as much anymore.

Hyde: I may never understand it because children aren't in my life trajectory now and may never be.

Donohue: If you are really a priority and love each other, you will compromise, no matter what. You will stay connected.

Hyde: It's broken because it's never going to be what it was. It's a new layer of death, and I guess it's okay to grieve those Saturday nights or last minute phone calls. You can miss those things, but still support each other on this new journey . . . . Very little sacrificing or compromising happens on Tinder, though.

Cash: I know! How does that work with dating?

Hyde: Poorly. Online dating is very firm. Everyone has what they want and I'm guilty of that too. It's like, 'Oh God, he wants me to go kayaking!' If I met him in real life and he wanted to kayak, I could let him do those things . . . while I go to an art museum. But, instead, I'm like, 'Nope! No compromise on that. This is on your menu. There's nothing I can do about it. I'll go eat somewhere else.'

Cash: Yeah, I guess all relationships are ultimately broken because relationships change. They break and come back together. Sometimes, it's hard to identify whether it's permanently broken or just taking new shape. I've been with my husband for eleven years. Our relationship has broken many times and we've put it back together in many new forms. This is commitment. I also have had broken friendships, and those are just as devastating.

Cash: Women who ghost other women: I don't understand. I was ghosted by a girl. I had to chase her down and say, ' Do you or don't you want to be my friend?' I felt like an idiot.

Donohue: I was talking with my boyfriend about this. I was sad because I had lost some relationships. He dramatically looked at me, and said, 'At one point in your life, everyone will break your heart: your mother, your sister, your brother.' It wasn't negative. It was like an understanding of life. That's how it goes.

Hyde: Just because it's broken doesn't mean it's bad. That's what I've learned here at the museum. Breaks inform you as a person. That's the important thing for people to remember. Everyone gets broken.