In 1917, Marcel DuChamp took a urinal, flipped it around, and called it "Fountain," demonstrating, as he saw it, that art was as much (if not more) about the artist behind the piece than the work itself. With the release of The Mix-Up 80 years later, the maturing Beastie Boys -- M.C.A., Ad-Rock and Mike D are all pushing 40 -- have gone DuChamp on their fans, recording a completely instrumental record flowing around their own unrefined, but not quite amateurish, musicianship. But even though every song sounds like it's missing, well, vocals, The Mix-Up is less a self-indulgent ride down "We'll-Do-Whatever-We-Want Lane" and more a portrait into the minds of our favorite B-Boys, framed by fuzzy guitar riffs rather than clever internal rhymes. The Boys are growing up and trading in their Adidas track suits for, well, real suits.

Spurred by the success of their instrumental Gala Events -- relatively small scale concerts which include both a dress-code (these B-Boys hate cargo shorts) and a presentation of Mix-Up-only tracks -- the Beasties are "breaking into a new kind of scene." Ad-Rock explains, "We're thinking the gala scene would be good for us. Like Lincoln Center, we like to go there a lot. Places where they have wine and cheese events, gallery openings, you know? We want to be a part of that whole movement." Suddenly, Friday night at the opera is a lot more appealing, not to mention quite a departure from the punk-ass Beastie Boys of yesteryear.

Starting out as a hardcore band, Beastie Boys were the first to truly merge hip-hop with rock, the latter coming in a flavor somewhere between punk and hardcore. They took what wasn't (and some might argued, shouldn't have been) theirs and created something that all of suburbia could emulate. With the release of their debut LP, Licensed to Ill -- yes, the one with "Fight for Your Right (to Party)" -- they were superstars. Critical and commercial success followed them as they revolutionized sampling (Paul's Boutique), played their own instruments (Check Your Head through Hello Nasty) or even just keep to the mic (To the Five Boroughs). After almost 20 years of recording hip-hop records, what more was there left to do?

Not unlike everything else they've done, going instrumental for The Mix-Up was no more than happenstance. At a recent press event at SoHo House, M.C.A. aka Adam Yaunch, the trio's soft-spoken sage, attempts to verbalize the complexities of the pre-recording process: "Originally, we didn't have an idea to make a certain record. We started recording stuff and it sounded kind of cool. The original plan, before we started on it was probably to have vocals." Ad-Rock, aka Adam Horowitz, perhaps the only Beastie to retain the group's signature snark, describes the group's process in the following terms: "Our last record [To the Five Boroughs] was an all rap record, so when we went in we wanted to record some instruments. That was fun so we kept doing that." And that was that.

And you can't fault the Beasties for having fun, certainly the best word to describe The Mix-Up's stream of grooves. Sure you might not be able to tell one song from the other unless you're playing really, really close attention, but that doesn't mean the keyboard intro to "Off the Grid" (played by non-Beastie Money Mark) or the slow drudge or a guitar riff in "The Rat Cage" aren't interesting. There are a lot of cool tracks on the record, but when it all comes together, it's as if the Beastie Boys put together an LP for you to play at your barbeque. Ad-Rock wants all of us to remember, however, that decision to go instrumental on The Mix-Up is not due lack of ability. "We could [rap]. It's not like we can't," he explains. "We could if we wanted too. You know what I mean, we could."

While he was surely belaboring the point for comedic effect, he knows where the Beastie Boys stand better than any of us. If The Mix-Up illustrates anything, it's that these hip-hop stars are on top of the world. Not because they recorded an "instrumental post-punk album" (their words), but simply because they could actually do it and not be lambasted for it. "What're you gonna do?" Ad-Rock posed hypothetically to one of the many journalists in the room incredulous as to why the Beastie Boys would forego lyrics. "We've got plenty of more records coming. We just wanted to make an instrumental record." And, at this point, the Beastie Boys can do whatever they damn well please.

The Beastie Boys are currently on tour. 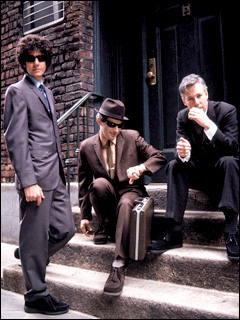