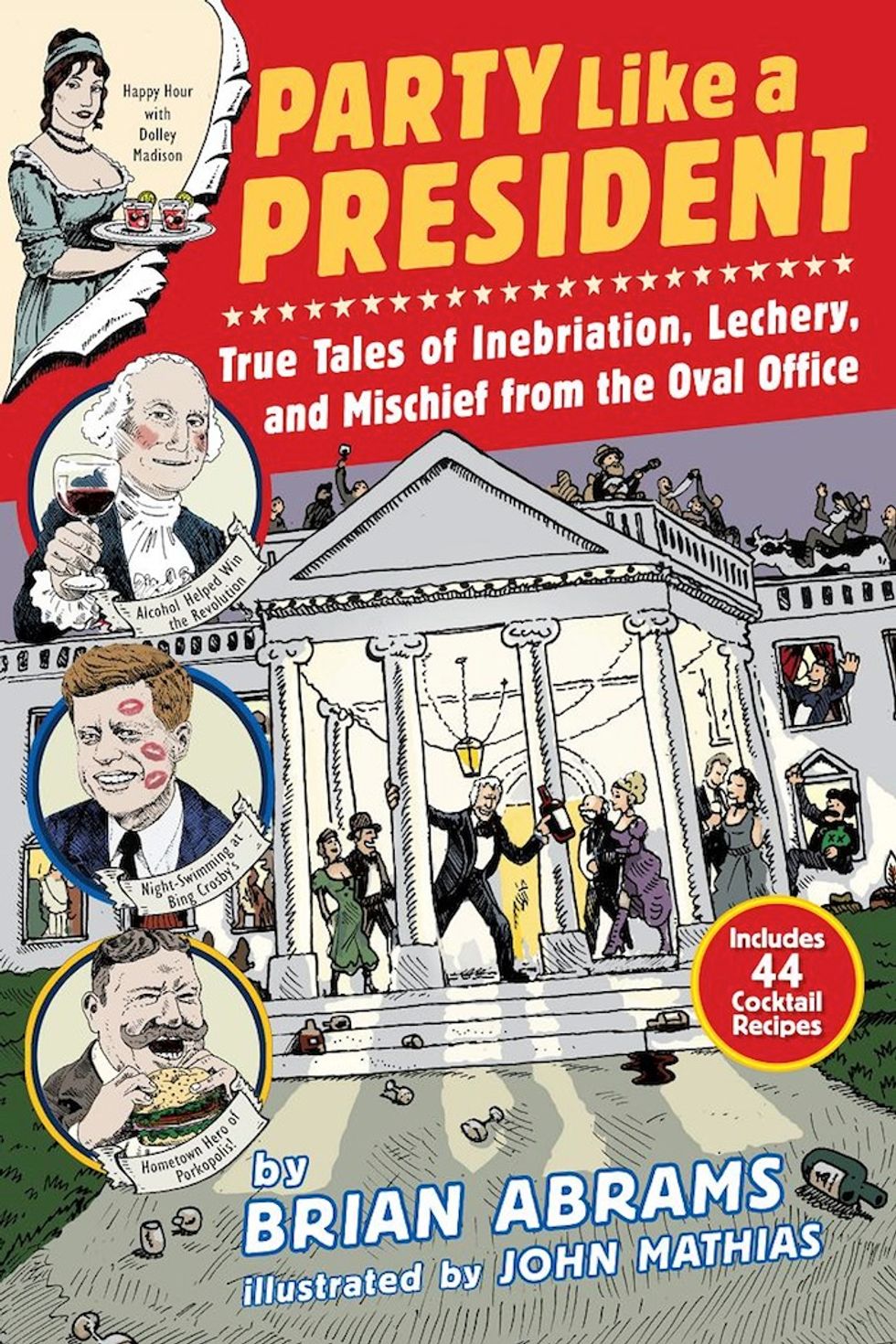 Author Brian Abrams On the Secret Sex, Drug and Booze Habits of Our Nation's Presidents

by Abby Schreiber
PAPERMAG
While a lot of people lucky enough to get Presidents Day off use the holiday as an excuse to book a three-day weekend ski trip or eat Doritos in bed and watch Netflix for 72 hours straight, it might be more appropriate to celebrate our nation's leaders by pouring a stiff drink. Turns out, quite a few men who occupied the Oval Office were borderline -- if not full-blown -- alcoholics. (And that's to say nothing of their other vices that ran the gamut from popping pills to chasing tail.) In Party Like a President, a new book by author and Death and Taxes Editor, Brian Abrams, we get to take a deeper dive into the mischief and fuckery that took place inside the White House by old white dudes who were supposed to be running the country. No surprise -- it's highly entertaining and highly enlightening. In honor of Presidents Day, we spoke to Abrams about his book and learned such fun facts as a POTUS' nickname for his penis and why one theory believes a former Leader of the Free World died from poop poisoning. Read on.

What made you come up with the idea for the book?

I think it started back in 2005/2006. I was living in Texas, working at my dad's dry cleaners at the time and writing for an alt-weekly. My editor there had this Denver-based zine on his desk called Modern Drunkard and I just pitched them an idea to write a story on the drinking life of FDR. It became a 3,000 word piece. I look back on the article now and the jokes are bad, way too bro-y and obvious and it's not even historically accurate some of the stuff in there. But I thought, how cool would it be to expand this into a giant book one day?

When did you actually start working on it?

It was in 2012 when the idea came together. I'd just been fired from Buzzfeed and I had this feeling that it would be cool to have a higher calling than that of writing captions for YouTube videos. I just decided, Alright, Brian, you have to stop dicking around. I just sat down and developed this proposal with John [Mathias], the illustrator, who was introduced to me by a mutual friend. The proposal was ready in the spring of 2013 and we sent it to two agents and they both wanted it. When the second agent wanted it, we knew we had something. It wasn't delusional. It might've been psychotic but it wasn't delusional.

After writing the book, did you walk away with a newfound appreciation for any of our presidents?

Yeah, I think so. In some form or fashion, I did kind of like them all as personalities. I even remember having moments where I thought George W. Bush was appealing to me in some way. But Reagan? Never.

Do you have a particular favorite?

Everyone asks me who I'd want to get a beer with and I guess I probably wouldn't mind having a beer with Gerald Ford.

Because if I had said "Chester A. Arthur" and then I ended up having a beer with him, we would have nothing to talk about because he hasn't seen any movies. We would have nothing in common. But, I dunno, Gerald Ford just seems kind of alright. Not that he didn't have tempers at times but I can see why he's the ultimate, jovial "beer on the front porch" guy.

Were there any presidents that you disliked even more after writing the book?

It's not like I knew anything about Martin Van Buren before really delving into this. But no, not really.

It sounds like Harding was a pretty lousy president.

Harding is known as the president who was riddled with the most scandals. All these scandals came to light after he died in office in 1923. He was only there for two/two and half years. He died and all this shit came out about corruption in his Cabinet. None of the corruption ever linked directly to him so it is believed that he just picked the wrong people. In the book, I created a chart in that chapter that maps out all the crimes that happened because it's so confusing. It's based off the Senate hearings in The Godfather: Part II where they have the Corleone family mapped out on the board. There's a guy in the middle who was his campaign manager and who was appointed as Attorney General and he conducted most of the corruption related to the bootlegging and bribery. It was just a free-for-all. We'll never really know.

Beyond the political scandals, it seems like he was also the absolute worst husband, up there with Kennedy with the number of extramarital affairs. You wrote about him having gonorrhea and knocking up a neighbor of his future wife...

He's a sleazebag although I think that more so than JFK and Jackie, Warren Harding and his wife Florence Harding maintained more of a professional marriage that was closer to Hillary and Bill than John F. Kennedy marrying this young Jacqueline Bouvier. When he was a senator in Ohio and he owned a newspaper, Florence came in and ran the business side of it. She was very much an operative in his game. But there was this biographer of Florence Harding who counted something like seven possible affairs he had. So Harding had gonorrhea, JFK had this nonspecific case of urethritis that was with him until the day he died. It went untreated when he was younger so he was always pissing fire. I don't know of any medical issues with Clinton.

Any other STDs in the annals of presidential history?

Since you brought up Van Buren, what else can you share about him? He's one of those presidents that modern people just don't really know about like Polk or Fillmore.

There's a part of me that felt sympathetic toward him. Here's a guy who was elected in 1836 and started his term in 1837 and right off the bat, the country falls into a financial crisis. The workforces are cut, everyone is poor, it sucks. The budget allocated a portion for entertaining people from out of town and he made it a point to do that very quietly and not rub it in everyone's faces. That ended up backfiring in a way because William Henry Harrison comes along and he's this populist candidate for the Whigs and he was known as the 'Log Cabin and Hard Cider' candidate even though he was not born in a log cabin -- he was born in a really luscious piece of property that was his family's. And he never drank. But he's seen as this 'Joe Sixpack Hero.' You can hear the Springsteen song playing as he's walking down the street. His people ended up spinning [Van Buren's frugality] on him to make him look lame, like he should've been opening up barrels of hard cider on the front lawn and being like, "come on down."

And Harrison and his people won. But he only held the office for a month?

Yeah, William Henry Harrison gets elected and dies. People originally thought he died because he got pneumonia but now some scientists in 2014 came out with a theory that said it was due to "shit poisoning." It's nuts. When people took shits in the White House, [servants] had to take a wheelbarrow and push it a couple miles down the stream but if the wind blew, particles of the festering pile of shit came through the windows of the White House and you could get a bacterial infection. They euphemistically called it "night soil." So nasty.

Were there any presidents for whom it was really difficult to track down any information like this?

Some presidencies are more well-documented than others. Chester A. Arthur, for instance, was known as the ultimate procrastinator. By the way, in politics, that's not necessarily a negative -- that's possibly a political strategy. But here's a guy whose average workday might've been 5 hours total.

He'd take two full days off a week. If Obama had his schedule, he'd just be roasted. So here's someone who doesn't look exactly like the most committed president. He also didn't move into the White House for his first three months of his term because he wanted it redecorated. So when an official biographer went back to write the biography in the 1970s or 1980s, he obtained papers from the White House during that era and he later told me that there weren't all that many. He didn't know if it was because Arthur was this genuine slacker George Costanza type or if it's that whoever was responsible for archiving them lost them after the fact. On the other hand, you sit there and wonder because we still have letters from George Washington that are kept -- no one lost those.

So there definitely is more information on some than others. Like you have LBJ on a phone call in 1964 to a guy in Dallas, Texas to fit his pants and he's belching into the phone, talking about his 'bunghole' because he 'needs room for his nutsack.' Or Warren G. Harding writing love letters and nicknaming his penis 'Jerry.' He writes to a mistress that 'Jerry is standing beside me as I write this.' Like, he's got a boner while he's writing. Could you imagine if Warren G. Harding got a hold of Skype?

After all this, what's your number one favorite presidential anecdote you unearthed?

I think it was interesting that Woodrow Wilson preferred his wife on top. I'm speculating here but there was a love letter he wrote to his first wife in 1894 before he got into politics and he's like, "When you get back to me, you'll smother me, will you?" She was a very curvy woman, too, so I just imagine he probably wanted her to be on top.

Party Like a President: True Tales of Inebriation, Lechery and Mischief From the Oval Office is out now via Workman Publishing. You can buy a copy HERE.