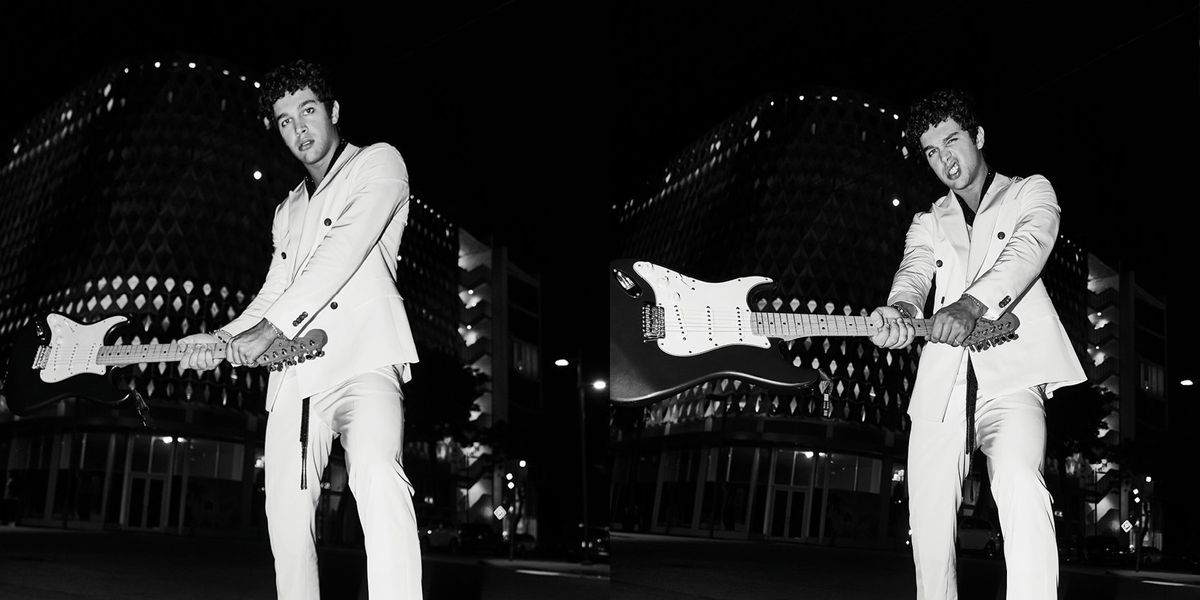 Austin Mahone got famous as a YouTuber, but these days he wants to be a rockstar. When we meet in the restaurant of a downtown hotel during New York Fashion Week, he's wearing dark glasses and a leather jacket. "I think what the world needs right now is a little bit of rock," the 22-year-old muses, after taking the glasses off. "Something different from everything that's so hip-hop."

Since going viral in 2010, Mahone has actually dabbled in several musical genres. His career trajectory was pioneered by Justin Bieber: baby faced teen films himself covering feel good hit songs, goes viral on the world's most popular video sharing service, snags a record deal and crosses over to Billboard.

"I was coming home from school everyday with my best friend, Alex," he recalls of that era. He makes it sound so simple, and maybe it was. "We were just not fans of school at all. We wanted to do something cool with our lives. So we started posting videos of us wrestling in his house, dumb stuff that no one really wants to watch. One day I tried a singing video, and that video got more views than the rest of them, so we kept doing those. Once they began getting big, I decided to make my own channel and focus on strictly singing. After maybe two years I got signed, then I moved to Miami and started everything."

Life has been good ever since. Mahone has collaborated with Lil Wayne, toured with Taylor Swift, dated Camila Cabello, and released four EPs plus two singles. This year he'll finally make the leap to a studio album, although there's no rush. Mahone never fully cut ties with the Internet — he is unusually engaged with social media, especially Twitter, where he frequently begins the day by saying good morning to fans — and up until now he has preferred to drop tracks online on the fly or as part of casual mixtape projects.

"Ever since I started my career I've loved doing everything on my own, from recording videos, to picking out songs, releasing them when I feel like it," he explains. "I just like putting out music in general. I don't like to keep that from my fans because I have such a big fan base and they love the music that I make." The fans are everything, actually, and Mahone seems puzzled when I suggest some musicians like to keep the obsessive teens at a distance. "I don't know why," he says. "They're the reason for everything that I've done so far. I just treat them like my friends, you know. My best friends. I talk to them on Twitter, I text with them."

This is where Mahone departs from major label mainstay Bieber, whose song "Mistletoe" he actually covered during those early YouTube years, garnering millions of hits. He's comfortable with being adored, and his experience of fame has been contrastingly free of controversy or personal breakdown. He likes his life. He doesn't mind being in the public eye. When I ask if he has any complaints, the only downside he can come up with is "not getting a lot of sleep." Again: rockstar.

The new music, Mahone says, is "different than everything else I'm going to be putting out." It has "a little bit of a disco type of feel." Lead single "Why Don't We," co-written by Charlie Puth, is a smooth 2000s throwback. Mahone claims to have recorded around 200 unreleased songs in the past couple of years, and says it'll be tough to narrow them down for the record. "But I'm going for a smooth, disco-meets-pop type of feel," he explains. "I have so many worlds that I love — country, R&B, funk — and I just want to mesh those all into one."

Related | Halima Wants the Next Generation to Dream Big

Music keeps Mahone busy. His songs are huge in Asia, and so he often finds himself in different time zones, performing sold out shows far away from home for months at a time. While we talk he orders he orders a mug of hot water from a passing server, removing a small green capsule from his pocket. It's tea, he explains, gifted by one of his many devoted Japanese fans. As we watch it slowly dissolve, Mahone talks me through his two main side projects, which are modeling and photography. The former has slowly taken up more time over the past couple of years, as Mahone's once-cherubic features have matured into some seriously camera-ready angles. He walked for Phillip Plein's fall show last night, revelling in the odd mix of stress and glamor that converges backstage before a big runway event — "a good, crazy madness" is his apt description.

Being behind the lens, though, is what makes him happiest right now. His fans are into it too: Mahone's photography-dedicated Instagram side account, @honoroll, has quickly amassed close to 17,000 followers. (Admittedly nothing compared to his namesake account's 10 million). Taking up grid real estate are pensive girls in cowboy hats or bikinis, LA skaters, and friends riding bikes in the dark. Mahone likes to shoot film, for vintage effect, after obtaining his first analogue camera in Japan: a Rollei 35 with a rare gold finish. He just went into a camera store and "picked the first one I saw." Now he uses any downtime he gets to take photos.

But back to that long-awaited album. It's coming soon. "I just shot a video a few days ago, started at 7 PM and shot all the way to six in the morning, went straight from the set to the airport and came here to New York," he promises. "That's the rock star life right there."