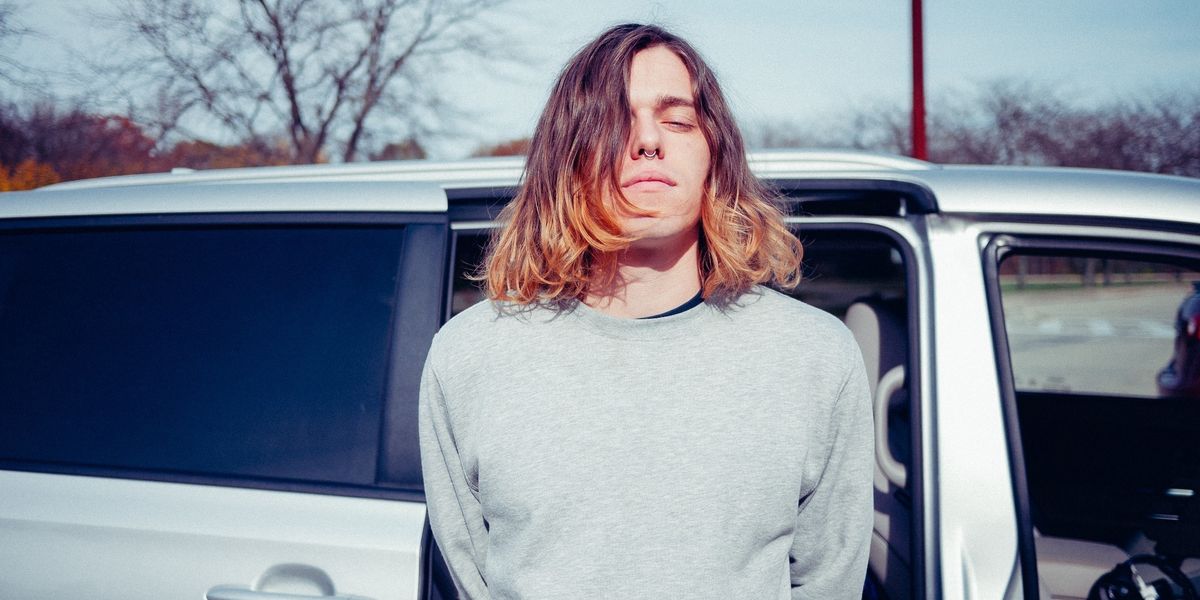 Aussie MC Allday Wants You to Give Him a Hug

Meet the Down Under rapper who's trying to break out in the U.S.

Allday (aka Tom Gaynor) wants to upend any expectations people might have when they hear he's an Australian rapper. It's not that he's trying to hide it -- the 24 year-old MC lets his Australian accent come out in his rapping, which, given the criticism leveled at fellow Australian rappers who've ditched their down under speech in favor of affecting accents from the American South, is probably a wise choice. But at the same time, he's aware of how other acts have tainted the albeit limited space of "Australian hip-hop acts" and doesn't want to be billed as an "Aussie Hip-Hop artist." Instead, like a lot of young musicians who came of age on the Internet, he's a mash-up of genres and references, an art school kid who records melodic, pop-y hip-hop jams, like the ones heard on his recent LP, Startup Cult. In person, he's an open book, unafraid to candidly discuss hook-ups, drugs and strippers. He recently spent the last month touring the United States for the first time ever, playing clubs, and in the midst of all this, we had the chance to chat with him about why a lot of Australian hip-hop is "trash" and rap idols.

Because you're relatively new to the US market, do you have a one-liner that every American will remember you by?

Fuck, I don't know man. That's an intense question. I think a lot of the best artists are too multifaceted to be remembered by a single idea. Sometimes it's easier to market a single idea, but it's not always the best way to present yourself.

You got nothing then?

When did you start rapping?

I started rapping when I was a little boy in my hometown of Adelaide -- I think I was about 10? When I was younger, I had a gift, which was not realizing how shit I was at something I was trying to do. Through this deluded self-confidence, over time, I just kept getting better and better at rapping. Eventually I was chucking out mixtapes when I was 17 and just giving them to friends and stuff. It was never something I had to try to do. I was thinking to myself: 'Just do what feels natural.'

Rapping feels as natural as breathing to me. I moved to Melbourne at 18 and went to art school. I took classes in screenwriting, sculpting, basically anything, trying to figure out what I was supposed to do in life. At the time, I had another mixtape and I was passing it around the train station, just harassing people and shit. I think by the time I picked up the speed of the bigger city was when shit started gaining traction and I realized that no matter what I had been doing in the interim, I'd been rapping this whole time. That was about three years ago. Now I'm here.

What do you think record labels saw in you that's different from other Australian hip-hop hopefuls?

A lot of Australian hip-hop is trash. It's not current. It's a sham. I feel like to be in hip-hop, one of the things you need to be is effortlessly cool. The best hip-hop artists ever have been icons of culture and fashion as well. People forget that you have to have a part of your personality that really makes you stand out. That's a really big part of it.

This is what separated me from these other dudes. Not that I think I'm cool, but I always did what I wanted to do and that resonated with my audience. I'm not going to do anything different, just to become a rapper. I'm just going to be me. I'm going to hang out with the girls in clubs, I'm going to go to rock shows AND I'm going to rap. It's about being you, and the more complex, the better.

Where do you hangout when you're in New York?

We basically just hang out in STINK-WICK…

I coined that! I think people like Bushwick too much to call it STINK-WICK. But, we're in the stinky part. All I've really been doing is exploring, sucking up the energy of the city, and looking at architecture.

I remember reading a Tweet of yours saying that the stuff you've written here in the US has been better than anything you've done before. Why is that?

Well, I'm a weirdo. I can get very inspired very easily and then that inspiration can disappear just as quickly. I'm very impacted by my surroundings. When I was in LA working a month ago, we were in this old Freemason lodge that was turned into a studio where I wrote some really serious, dark shit. But also, I feel like my second album should totally be better than my first. I mean, if it's not, then I need to try harder, don't I?

When can everyone expect some new tracks then?

I don't know. In a couple of months? See the last album was weird because I released it at the same time I broke up with my girlfriend who I was living with. I was moving houses a lot, got addicted to various drugs. Well, I'm using 'addicted' very loosely here. But [I was doing] cocaine, ketamine, MDMA…

How did you afford all this?

It was just around. I was going out a lot and I burnt through a lot of my recording budget, which is what you have to do. I mean, no one is making solid financial decisions with their record label advances. I was just addicted to the process of always getting high. Anyone who lives in Melbourne could tell you that this motherfucker was out and about. I was just getting through a break up and adjusting to the fact that more and more people were recognizing me and knew who I was.

Have people recognized you here?

A few people here and there but I don't classify success as being recognized. I think I'll be happiest when I make a track that I can play next to somebody I really idolize and think that it's sort of on the same level.

Which artists do you idolize?

Kanye, Drake…but I'm nowhere near them yet. I just want to keep making stuff that gets better and better until I feel I'm on the same level. I could be deluded and wrong, but just like when I was a kid, I'm convinced that I'm still going to keep doing it and if I don't get there, I'm going to work my ass off to get mighty close.

You're really interactive with your fans, right?

Totally. That's definitely important to me. I can spend hours in the crowd talking to people who have come to see my show. When I put out my album [in Australia], we drove buses around Sydney and Melbourne, picking people up who followed my social media accounts, just so they can hear it. Over the years people have turned from being total fans who would scream and cry when I'm around them to genuine friends.

Have you ever hooked up with anyone from social media?

Have I ever used "Allday" to fuck girls? Straight up. Check out my Instagram, I'll check yours out and we'll take it from there.

If someone sees you in the street and recognizes you, do you want them to approach you? What should they say?

Fuck, of course! Come up to me. You can say whatever you want. Just make sure you give me a hug.