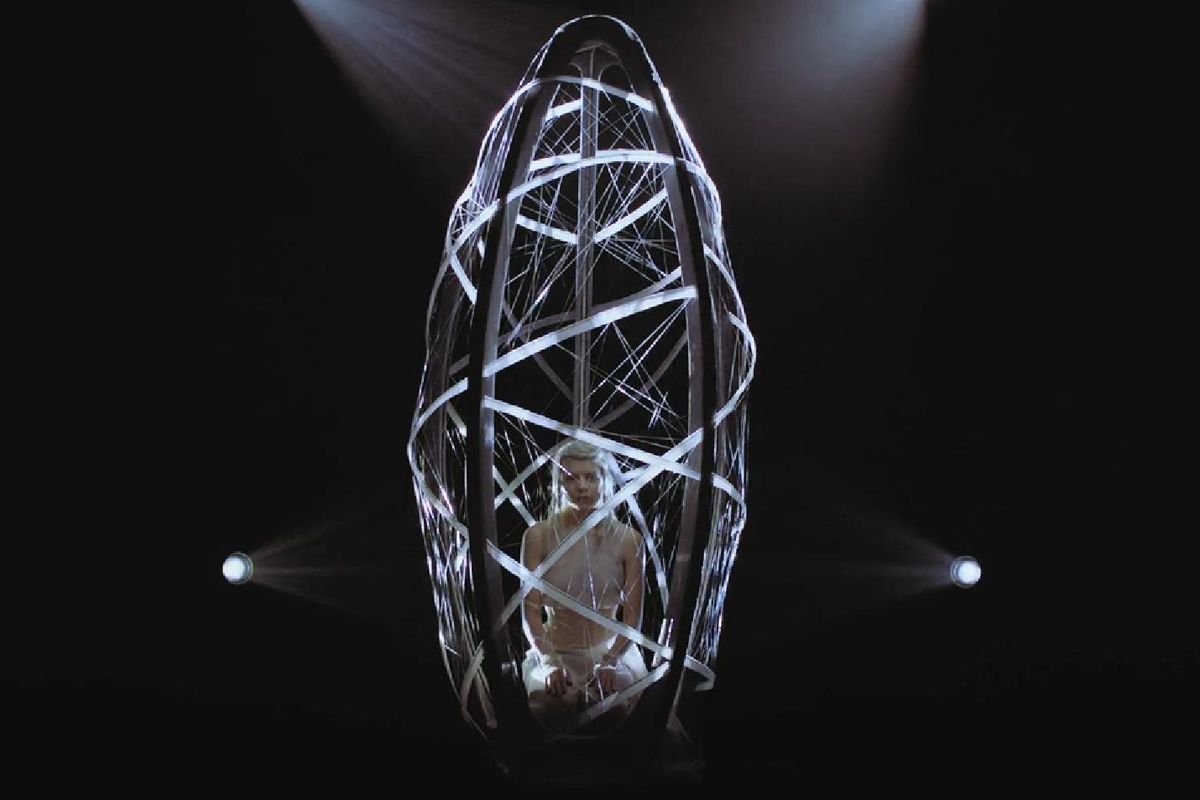 The track appears on her album "All My Demons Greeting Me as a Friend."

Norwegian art-pop songstress -- and 2016 Paper Beautiful Person -- AURORA is premiering her latest video, "Winter Bird," here on papermag.com, a quietly lush track perfect for these long winter nights. The video features the artist enclosed in a metal cocoon, whose gauzy outer layers come to envelop her with the aid of drones. It was a special project in collaboration with YouTube and was shot at Carnegie Mellon in Pittsburgh; the university's engineering and robotics department also assisted in the planning and execution of the multi-layered project. Of the concept, AURORA points to her love of nature and, more specifically, bugs. "My favorite bugs are moths!" she says. "On my first album cover [All My Demons Greeting Me as a Friend] I chose to have an image of myself [with] half wings spread and half wrapped in a cocoon. For me it symbolizes change. Evolving. And in my song [which appears on the album], "Winter Bird," I find myself in a place -- or state of mind -- that is neither good for my body and soul. The team I worked with on this video had done this research and said, 'Why not put you in a cocoon? Wrapped by drones?' And I loved it."

YouTube's Global Head, Artist Content & Services, Vivien Lewit, whose team worked with AURORA on the video, says that on a technical level, their production team "utilized camera movements that mimicked the flight of a drone to show a drone's perspective while wrapping up AURORA in a cocoon like shell." Both Lewit and AURORA point to one of the main themes in the video as the tension between technology and organic material. The video is "rooted in a combination of technology (drones in a robotics laboratory) and nature (metamorphosis, an organic process)," Lewit says. AURORA adds, "It's both magnificent and terrifying how the world is evolving and how technology is evolving. And if we go back to the concept of change -- I quite liked pointing that out with having drones in the video with me."

While the drones themselves did not shoot any footage, they instead played a role that, Lewit says, "hints towards a future where [drones] may feature more prominently as actual characters in film storytelling." And, indeed, AURORA says one of the biggest surprises of the day was how active a role they played on set. They "make a lot of noise!" she says. "And they make a lot of wind. They seemed more alive than I expected -- almost like they had personalities. It was rather strange...but I felt quite safe. And it was nice."

Watch "Winter Bird" above and snag a copy of All My Demons Greeting Me as a Friend here.