I probably would have rather been just about anywhere than combating the aggressive, sweaty attendees swarming Webster Hall Monday evening. Unlike Webby’s weekly all-night deejay scene, Girls & Boys, complete with V.I.P. stage access for reporters, concerts –- that is, bands comprised of actual musicians with vocals and instruments –- are another experience entirely. These attendees pay no mind to press passes and cumbersome cameras. Oh no, the media mavens are on their own amid the sea of devotees, and this wee writer just about drowned in the flood of Atmosphere fans.

No matter. After fighting tooth and nail to secure my cheeks a seat on the stage-left speaker, little could dissuade me from making the most of these Midwest wunderkinds, better known as MC Slug (Sean Daley) and DJ/producer Ant (Anthony Davis). (Except perhaps the repetitive drink spillage from the balcony overhead, but whatevs, I was waterproof, wearing my Loeffler Randall circle ruffle one-piece swimsuit as a top. Oh snap!) The dynamic duo, joined on tour with their right-hand men and woman (Mankwe Ndosi crooned her heart out with moves to boot, Nate Collis expertly worked the guitar and Erick Anderson commanded the keys), took the stage around 9:50 p.m., following two openers, which I must admit I missed. The smoke machines were in full (photographically frustrating?) effect, as were the lights, which switched among red, blue and yellow hues mostly. They had these rad additional LED light displays as part of their setup and Slug treated his sneakered feet to a plush oriental rug. How swank. The venue temp was stifling, but from my perch I likely suffered least. Plus, the room brimmed with the sort of folks who leave home expressly to have a badass time, pit-stains, ripped pants, booze splatters and all. The more evidence of a struggle the better, right?

The die-hard audience went wild for the epic pair, legendary artists that have been dropping beats and bustin’ out wicked rhymes together since the early ’90s. Hailing from Minneapolis, this is the second time this year (technically the past 365 days, not since January) they’ve passed through New York, last time taking over The Fillmore. Much like last October, the men made magic happen with an array of tracks plucked from multiple albums. Especially of note, to my mind, were songs “Your Glasshouse,” from their most recent release When Life Gives You Lemons, Paint That Shit Gold (2008, Rhymesayers), “Always Coming Back Home to You” and, double duh, the catchy-as-anything single “Trying to Find a Balance,” both off of Seven's Travels (2003, Rhymesayers/Epitaph). The latter two they performed during the encore, or, rather, the quasi-encore, as Slug made explicit what I’ve generally been too much of a priss to say myself: “Encores are pretentious.” So they stayed put at the end and, after all select Atmosphere numbers had been sung, Slug freestyled with opener Eyedea, of Eyedea & Abilities. They didn’t so much battle as collab, playfully challenging each other, whilst boasting shit-eating grins. All in good fun.

Overall, the evening proved massively energetic, for performers and listeners alike. Donning Adidas shorts and socks, a Kangol newsboy cap and a T-shirt featuring the image of a bleeding animal skull, Slug explored the stage space, incessantly pacing and gesticulating, encouraging the audience to do the same. “Put your instruments in the air!” he’d shout. “I wanna see your fingertips!” Slug gets what he wants. “Make some noise, you ugly bastards!” he yelled as an intro to their ever-famous “GodLovesUgly,” off the album of the same name (2002, Rhymesayers Entertainment/Fat Beats Records). Slug also took time out to recount to everyone that before the show got going he greeted people outside on the street. Reason being? “You sold this motherfucker out!” He touched on how he’s older than he looks and how we all looked so young. He’s absolutely right, what with the 19+ door policy and all. He referred to us as “Festive motherfuckers,” which he established due to the fact that we’d take “a weird, gloomy song and turn it into a party.” Well, no kidding, that’s how we do it in Manhattan, am I right?

All of Slug’s speaking made up for Ant’s mum mouth. Slug’s silent partner in crime, so to speak, hung back by his turntables and chain-smoked the entire time. He couldn’t have been more at ease, soaking up the experience from his spot, a knowing smile perpetually plastered on his friendly face. He’d lip sync from time to time, but for the most part spun and smoked, spun and smoked. Swig of beer here and there. At least Slug’s habit of choice wasn’t reprehensible, sipping on OJ all night. (Could have been a screwdriver for all I know, though.) While on the topic of vices, though, several joint-passing, stealth-less youth were promptly dismissed by beefy security guards upon being found out. Kids these days. Too funny.

Slug sent us away at the end feeling fulfilled and eager for future pit stops in the Northeast. Before we exited, he imparted, “Stay safe. We wanna see you next time.” Well, that’s the plan. 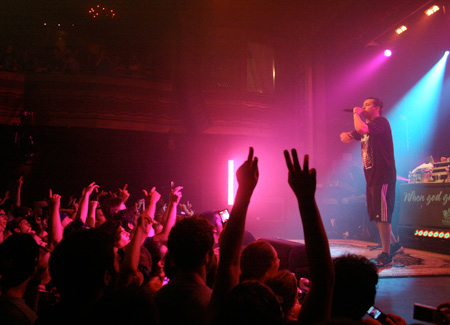 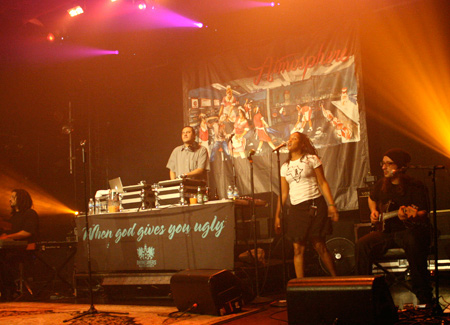 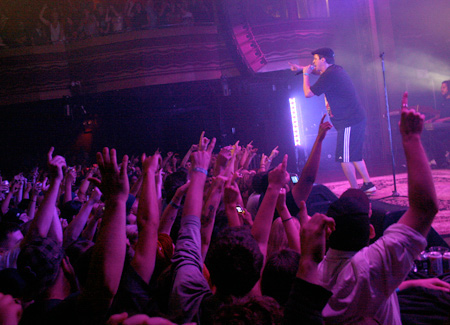 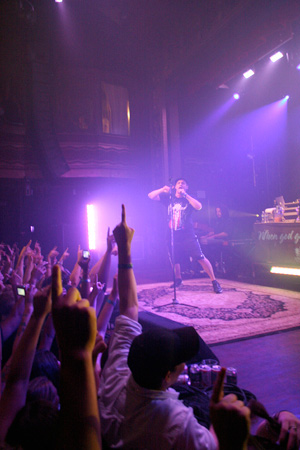 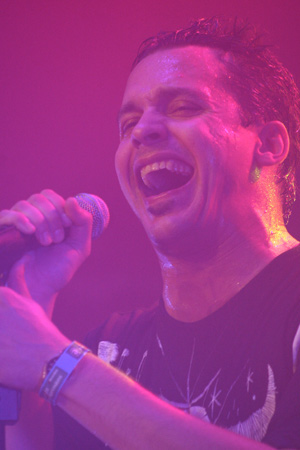 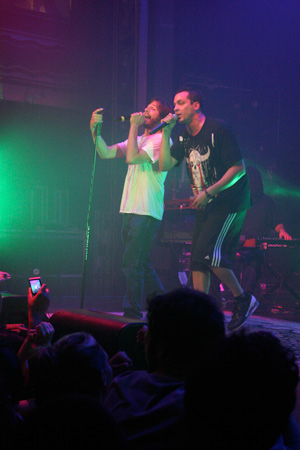 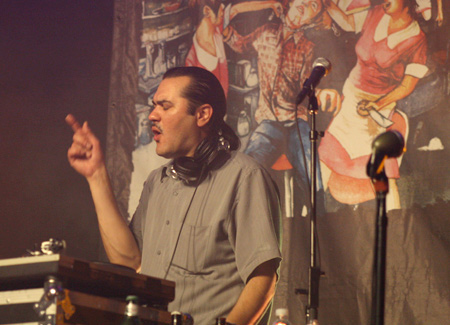