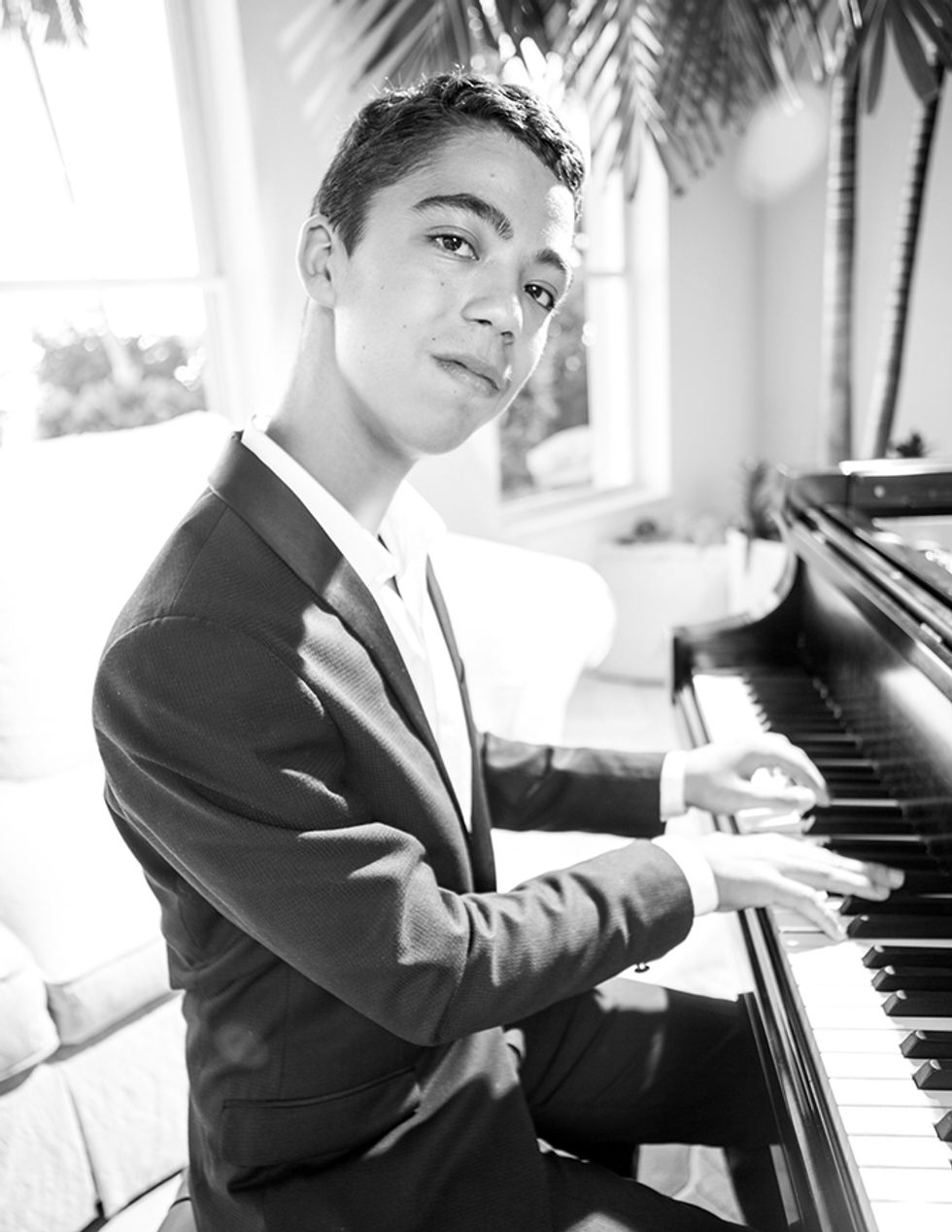 At Home With Ethan Bortnick, the 14-Year-Old Piano Prodigy and Multimillion-Dollar Philanthropist

by Eric Newill / photo by Jill Peters
PAPERMAG
Being a child prodigy is good business. That much is evident from the sprawling, vaguely Mediterranean residence of 14-year-old piano sensation Ethan Bortnick and his family. And though he's racked up multiple appearances on The Tonight Show with Jay Leno and The Oprah Winfrey Show and helped raise roughly $30 million for charities worldwide, when Ethan bounds into the room he seems like any other high-energy kid growing up in humid South Florida.

"You have to stay humble. It's the most important thing," Bortnick says, paraphrasing a mantra he told Winfrey when he appeared on her show in 2008, when he was seven. "I had no idea who she was," he adds. "My parents said, 'Don't worry, she's just some lady. She's going to interview you, so have fun.' I didn't know what to expect, so I just went with the flow."

By then he had already opened for Nelly Furtado and performed Bach for Leno, demonstrating a remarkable ability to play pieces by ear. Bortnick can't point to the origin of his talent, but at age three found he could replicate Baby Einstein CDs note for note on a toy keyboard. Initially, Bortnick's Ukraine-born parents, Gene and Hannah, didn't believe the sounds they heard emanating from another room were coming from their son, and they balked at his request for piano lessons: "You're still in diapers!" But his ability was undeniable, and soon he was tossing off Little Richard and Elton John, jazz and pop and disco, with a razzle-dazzle showmanship that would lift him to stages alongside BeyoncÃ©, Gloria Gaynor and Josh Groban.

Some pieces still elude him, including "Flight of the Bumblebee." ("My hands weren't big enough for it," he explains, "and I haven't revisited it.") But you'd never guess it from his performances. Vaulting from warhorse classical sonatas to '50s rock to inspirational power ballads, he keeps his audiences of thousands bewitched. His own composition "Anything Is Possible" -- which became the title track for a 2013 film in which he starred with Mean Girls' Jonathan Bennett -- is a surefire tearjerker at every show.

For the Bortnicks, anything is indeed possible. As brother Nathan pads into the room, shy but curious, Bortnick discusses his motivation to give back. "When my brother was born, he was missing half his heart. He needed multiple surgeries, and it was then I realized that music can help people in so many ways." The first charity he chose to support, Children's Miracle Network Hospitals, was a beneficiary of Ethan's Musical Time Machine tour in 2010, when the 10-year-old became the youngest performer to star in his own show across the country.

And because of him, an orphaned South African teenager is now studying dance in London. Bortnick tells me a story worthy of a Disney dramedy: a customary highlight of his concerts is the Q&A with the audience. The questions are usually predictable, about favorite songs or potential girlfriends, but in Johannesburg, an 11-year-old girl stood up and said, "Ethan, you say that anything is possible. How is that true when I live in the middle of nowhere, with no food, no water, no parents, nothing? I want to be a dancer, but do you think that's ever going to happen?"

Realizing he was on the spot, Bortnick asked the girl onto the stage. "I said I would play for her while she danced, and told the audience to take pictures of her and upload their footage onto YouTube." As it happened, the head of Apple's South African operations was present, and he volunteered to sponsor the girl's dance education in London. "Everyone was crying," Bortnick remembers. "Now she sends me pictures of her dancing lessons. It's the coolest thing. That's a real 'anything is possible' moment."

Before he tours again this fall -- he's taking a break, about which he candidly remarks, "My voice is changing" -- he'll spend the summer filming a new PBS series, Ethan Presents, and playing PokÃ©mon or Madden NFL with Nathan. Of course, there's always music, and occasionally he'll be inspired by a new artist -- or at least one that's new to him: "I'm a voting member of the Grammys, and with the ballot they send you a link to a website where you can listen to all the music. Sam Smith was cool, and Beck was really nice. I'd never heard of them before." He pauses to consider the galaxy of sounds, and opportunities, he'll encounter down the road. "It's great because the Grammys show me there's a lot of music I've never heard."