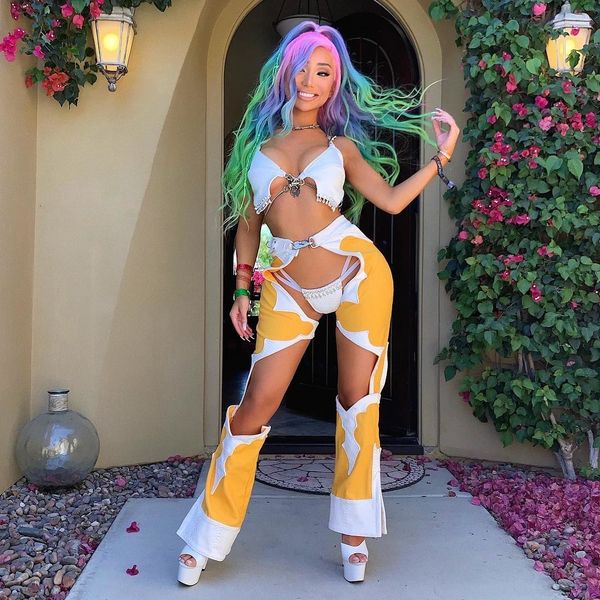 Assless Chaps Are the New Flower Crown at Coachella

The yeehaw movement has reached an extreme high, snowballing on the Internet into something now as mainstream as McDonalds.

For some, the western-inspired trend comes in the form of ironic stanning for the likes of country pop stars Maren Morris, Kacey Musgraves or Mason Ramsey; for others, yeehaw is significantly deeper — a cultural conversation that stems back to the work of Black creatives who have explored the imagery for years. Lil Nas X's "Old Town Road" remix with Billy Ray Cyrus was, in many ways, the climax, and climbed to the No. 1 spot on Billboard after sparking a debate about inclusion in country music.

Get into it, below, and check out 50 yeehaw essentials (courtesy of Amazon Fashion Secrets).

While Lizzo made a serious case for the festival rebrand ASSCHELLA, others are suggesting we call it CHAPCHELLA to account for the sheer breadth of chaps, from motocross to lingerie.

This past weekend can only be dubbed CHAPCHELLA™️ was there anything other than chaps to wear to stunt at Coachella… https://t.co/fphPsEKLKN
— Saint Shannon (@Saint Shannon)1555355714.0

Regardless, people all over took note of the cheeky trend, which seems to be Coachella 2019's answer to the flower crown (though they still made unwarranted appearances by a select few).

I remember when coachella was about Nina Dobrev and Ian Somerholder and Vanessa Hudgens serving boho chic looks, no… https://t.co/pmZTmPH3XP
— 〰️ (@〰️)1555339515.0

From URL to IRL, it seems yeehaw is gonna ride 'til it can't no more.