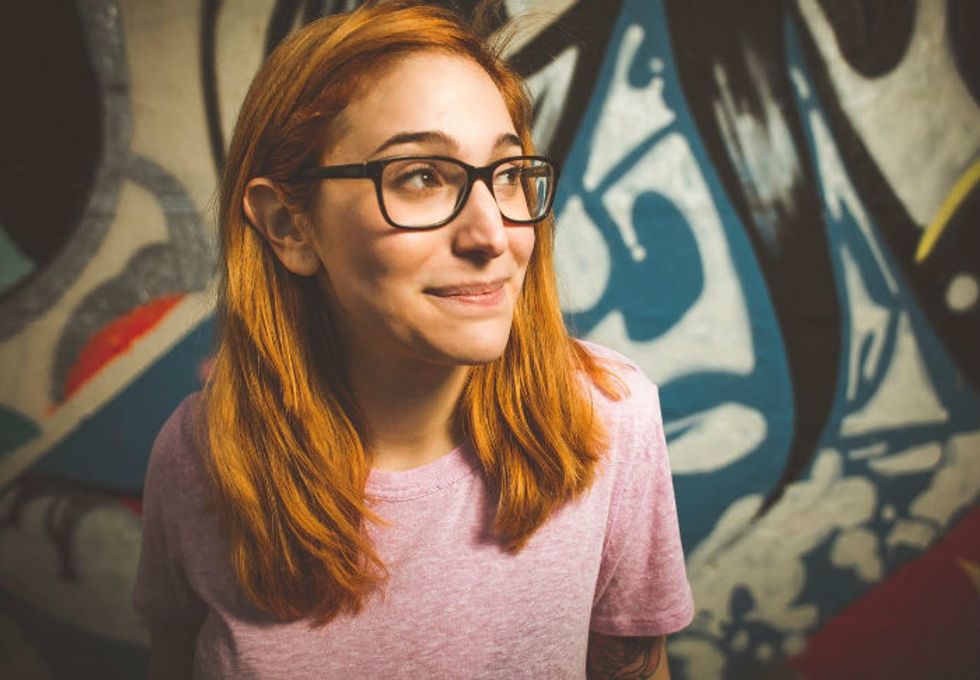 by Eric Thurm
PAPERMAG
The internet has been part of our lives for long enough that a generation of writers and artists has come of age with it, and used it as a tool to construct their creative and professional identities. But that also means that they grew up alongside an internet that today's teens would find foreign and scary, during the days when MySpace was the biggest social network, AIM buddy profiles were important social statements, and having your own GeoCities page was a big deal. Our new column, A/S/L, asks the people who are best at the internet to tell us about their personal Web 1.0.
For the first installment of the feature, we talked to comedian, writer, BuzzFeed Video star, and all-around internet superhero Gaby Dunn. If you're unfamiliar with her work (which is really great, especially for queer teens and teen girls), jump over to Twitter, read some of her writing, or check out her regular love advice webseries Just Between Us.
What was the first internet service you made an account for? Was there a specific reason you made it? (i.e. I made my first AOL account so I could sign up for Neopets.)
My first account was with a Superman message board called Kryptonsite. I made it when I was 12 years old so I could talk to other people about Superman, which no one in my real life wanted to talk about. The boards ran different forums, where people also talked about their daily lives. (I suspect everyone was very lonely.) I still talk to one woman I met on there, but I think I lied to everyone about my age for a long time.

What was your first screen name? Email address?
My first screen name was Bud1988, because "Bud" was what my parents called me when I was in the womb and I was born in 1988. It was not very creative, but to be fair I also was the child who named her teddy bear "Teddy" and her dog "Baby" so creatively wasn't really where I was at at that point in my life. My first email address was "[email protected]" which is a reference to a Dane Cook joke.

How many MySpace friends did you have at your peak? How many LiveJournals? (No lying.)
No clue. I was never very good at MySpace. I tried to be scene but ended up more sad, Hot Topic goth. I think I had very few MySpace friends, if any in real life. But by contrast, I was HUGE on LiveJournal. Right after I left Kryptonsite, all the cool people from there had migrated over to LiveJournal so I did too. Back then, you needed a code to get a LiveJournal and I wanted one very badly (because in internet-land, it proved you had important friends). I got one and made a LiveJournal and that was my entire high school years. I was on it constantly. I had one for fanfiction only, which got very big, and I even won an award for The O.C. fanfiction. My personal one was very dramatic and I had a great core group of friends on there, and we'd talk on AIM every night. I only ever met two of them in real life.

Who were the first people you thought were big deals on the internet, and did you ever interact with them?
There were some big name fanfiction authors I was obsessed with. They were named lalejandra and hackthis, and they wrote these epically long fanfictions with amazing backstories. I can't believe I remember their journal names. I have no idea what their real names are, or anything about them. Fanfiction back then wasn't known the way it is now because of 50 Shades of Grey. I never interacted with either of them. One of the moderators on Kryptonsite was a woman named Andie, who I'm still internet friends with. She seemed like a very big deal to me back in the day, and I got to meet her in real life, which I felt cool about.

Chart the history of your life in websites, by listing the most important site to you each year you've been online.
Kryptonsite - 2001
Fanfiction.net - 2002
LiveJournal - 2003 to 2006
(Then LJ gave birth to Greatestjournal and Insanejournal, which I also had and was obsessed with.)
Facebook - 2006
Twitter
Tumblr
and now I guess Twitter is back to being the frontrunner.
What's the strongest relationship you've ever formed with someone you hadn't met IRL?
There was this girl I became close to that I found out was actually another friend of mine, who I never met in real life, catfishing me. (Before catfishing was a thing.) But in a weird way, back then, no one got that mad about catfishing. Like, this girl and I remained friends and it was whatever. I had a very close friendship with a depressed guy, who was the one that gave me the code to join LiveJournal. A lot of these people were way older than me and lonely, and I was stuck in a boring high school full of homophobes and rich idiots. We needed each other.

Did you ever create alternate identities online or engage in proto-catfishing?Not really! I had separate accounts for fanfiction, that hid my identity somewhat. I also did Harry Potter roleplay, where no one really knows who you are. You pick a Harry Potter character and journal as them and people read it and follow the storyline. It was weird writing exercises, but no one ever knew that, "Oh, this journal is by Gaby." They'd just think it was by someone's interpretation of Hermione Granger.

What's the most important thing you learned from the internet?
Without it, I might have killed myself as a teenager. No joke. Because the internet showed me that everyone is weird. That I wasn't alone or destined to never have friends. It taught me that people like me, and potential friends were out there. I just had to grow up and find them.

Do you wish you had spent less time online as a kid? Do you wish you spent less time on the internet now?
I had an ex boyfriend tell me that I wouldn't have killed myself without the internet, I just would have started going to more punk shows. As in, I would have found my people any way I could have. So maybe in that way, I wish I hadn't been so consumed by the internet as a kid. But no, I was honing my writing skills and experimenting/meeting new people in a pretty safe way all things considered. Now, my job is online so I have to be here. And I'm happy to walk away when I don't need to be online. (I deleted Facebook and Tumblr from my phone as a first step.) But it's different when being online is your job. I'm not on every day like, playing fun games. I'm working. I think in the future that's how it'll be for most people.
You May Also Like
Famous People