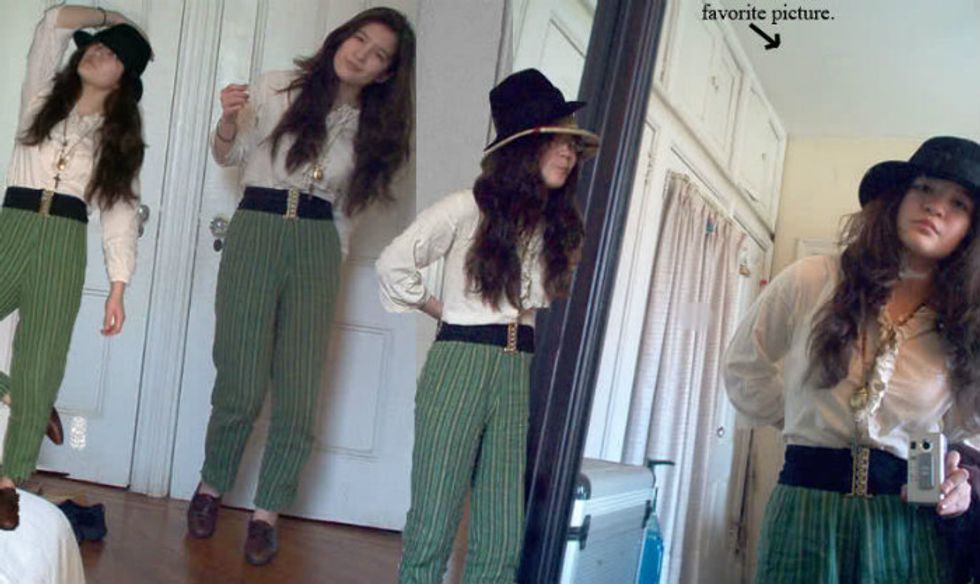 This week we talk to beauty writer and artist Arabelle Sicardi. Formerly BuzzFeed's Beauty editor and a writer for a vast array of publications that include Rookie, Refinery 29, The Daily Beast, and Jezebel, Sicardi is currently enmeshed in a battle over the appropriation of their* art by some dude at Yale and currently, possibly, writing a book.

What was the first internet service you made an account for? Was there a specific reason you made it?

One of my first memories is of AOL chatrooms! Trying to sext at 10 and chickening out, haha. Neopets was definitely a huge part of my life for a long time though. And then the Teen Vogue forums and Harry Potter roleplaying forums. Basically after the age of 11 I stopped going outside.

One of Sicardi's first fashion blogging photos, taken circa 2008.
What was your first screen name? Email address? What did they mean to you?

My dad made me a Yahoo email account -- vinylfinal@yahoo.com, I think. I have no idea why he chose that name. I still remember the random gibberish password. I think Yahoo at the time had a good random password generator -- I don't think they have it anymore. It was surprisingly progressive given that two-key encryption wasn't a commonplace thing yet.

What was your most profound AIM away message (or rough equivalent)?

I strictly used Fueled By Ramen lyrics as my away messages. Very intricately -- special font and color choices, the longer the excerpt the more pissed/moody I was. My short lived screamo phase was also memorable. (Note to self/I miss you terribly etc., etc.)

(We asked Arabelle for a particular Fueled By Ramen song, and were directed instead to their favorite My Chemical Romance song. Please give it a listen.)


How many MySpace friends did you have at your peak? How many LiveJournals? (No lying.)

I was totally a scene kid on MySpace and did the whole [MySpace Friend] train thing. My MySpace name was Arabelle Arsenic -- I can't remember how many friends I had, probably like 600 to 800? I had a brief stint as a catfisher, also. That was excruciating. I was very insecure. I had two LiveJournals. I still use one occasionally. Was never big on LJ, though, I mostly lurked.

Who were the first people you thought were big deals on the internet, and did you ever interact with them IRL?

I think Jeffree Starr was really big on MySpace when I was obsessed with it, and Jac Vanek? The scene queens. I've been to a bunch of events with Jac and she's nice. I think we're just really awkward around each other because we're both used to having the best hair in the room. Ha.

(photo via Jeffree Star Cosmetics)
Chart the history of your life in websites, by listing the most important site to you each year you've been online. How did each of those help facilitate your understanding of how taste functions and is created online?

Neopets -- for way, way too long, probably six years? Like all of my middle school/elementary school existence. I was obsessed with it and with guilds and the Help Chat, jockeying for prominence in the forums and making friends with the coolest people in the boards. I made some really good (superficial) friends and we looked out for each other, bought each other lab map pieces and stuff on our birthdays. It was a virtual gossip realm when I was too nerdy to actually hang out and gossip with people in my school at the time. I stopped caring when they froze my first and most precious account. I still have an account I think, it's probably 14 years old or something now.

(We attempted to find Arabelle's Neopets account, but discovered that, though their Neopets are -- hopefully -- safe, the website is sadly down.)

After Neopets I was super into Harry Potter Roleplaying Forums and totally lied about my age and stuff to be cool -- I wanted to be 17 or 21 so badly when I wasn't yet. Running forums gave me a huge sense of control and ownership. I cut my teeth as a writer in roleplay forums, I'd spend entire days writing or creating plotlines with other people. It helped me understand verbosity doesn't make you a better writer -- and sticking to one idea is much harder than doing whatever the hell you want until you're bored.

After HP forums I got super into Quizzilla/FanFiction.net and Teen Vogue forums when they still had them -- found fashion blogs that way, which I suppose started me off into fashion. I never read Vogue as a kid or Teen Vogue until I was in it, my parents never let me buy them. I developed my taste through fashion blogs and fashion books at the library and worked kind of backwards. I became a fashion blogger the same time I became a conscious fashion consumer. Now, I wouldn't consider myself a fashion blogger anymore, but it was a huge part of my life and I owe my life to it, probably.

What's the strongest relationship you've ever formed with someone you hadn't met IRL? Did it change if/when you met?

I guess it would be with Tavi! I think she's my oldest internet friend at this point? Which isn't to say it's the strongest since we're both really busy now, but it's the oldest, and she'll always be my sister. I think we've known each other for about eight years or something....since the start of fashion blogging. The O.G. Rookie crew -- her, Laia, Elizabeth, Hazel, me, we've known each other for a long time. These are the women I discovered feminism with and through, who were my sisters and support when I had none IRL. We are all IRL friends now. To be honest I wouldn't differentiate so much between IRL and internet friendships because at this point all my friends besides school friends, I've met via the internet or via someone I met on the internet. Internet friends are friends of choice and intention rather than circumstance, and I think that difference is everything. I am the child of WiFi culture. Meeting someone online isn't weird to me, it's just part of my daily habits.

When you were first online, did you ever create alternate identities?

Oh of course. I catfished people when I was like a 12-year-old! Not out of malice, I was really insecure and terrified I wasn't pretty enough and I was rejected pretty constantly for one reason or another so it seemed like the only way I would be given love at the time. The internet is a breeding ground for constant invention. I have a lot of sympathy for my younger self, even if she embarrasses me. I learned a lot, and I owe myself to my embarrassments. I don't think there's anything really wrong with editorializing your life.... to an extent, of course. (No Dolezals ever, please.) But all of me is real, even the performed parts. I don't think I owe internet strangers the whole or entire truth about myself. The internet is a very entitled monster. I regret writing under my real name quite often, actually. People think they know you because they've read 800 words.

What's the most important thing you've learned from the internet?

Anger is an energy / Time is a flat circle / the human capacity for evil is infinite / you can find your girls wherever you go / kindness can win sometimes, if you're lucky.

No / yes. I owe who I am to my endless time spent on the internet, and I love myself and am proud of what I've learned through it. I went to school, I am academically educated, but I'm self-taught in the things I care most about and make my living through -- I learned most of what I know about beauty and fashion, etc, through internet and publicly available resources. I'm grateful for that obsession I had when I was younger and the privilege I was given to be able to pursue these things to the very end.

But I mean of course it didn't come without consequences. My career has been media fodder, there are forums dedicated to hating and analyzing me and the people I love. I've had stalkers and hatemail and I met my rapist on the internet! The internet has ruined me in ways that if I had known, I would have never logged on in the first place. But I'm still glad I got sucked in to this garbage heap on most days -- isn't that strange and terrible? But you understand, I'm sure -- I owe everything to the internet, the good and bad parts. The good outweighs the bad, by far, by a million miles. I have learned to consume and experience it differently: less to share and prove myself, to validate myself and vie for space and power, and more to connect to the people I love and to remember what I want, the way I want to. I have a lot more secret spaces now -- portions of internet just for me. I think there's a luxury in not sharing everything. It is one of my greatest wishes to be more mysterious -- I'd like to be fog. Fog is terrifying.
You May Also Like
Internet Culture