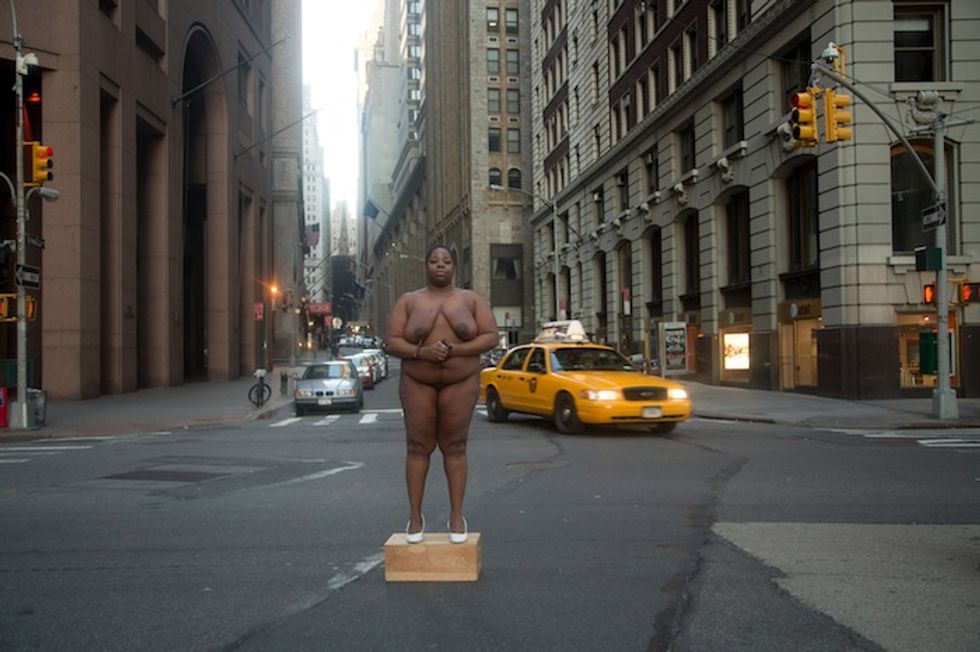 by Abby Schreiber
PAPERMAG
Nona Faustine, "From Her Body Sprang Their Greatest Wealth" 2013
Shot at the "site of Colonial Slave Market, Wall Street"

In our selfie-and-dick pic-addled age, it's refreshing to see someone taking nude self-portraits not for attention or for the gratification of another person but for artistic expression and critical socio-cultural examination. For the last couple of years New York artist Nona Faustine has been posing nude and shooting photos of herself at New York City's former slave sites in a series entitled White Shoes. The poignant photographs, which show her standing atop a wooden box completely nude with the exception of chains around her wrists and a pair of white heels (symbolic of this country's white patriarchy), are taken on Wall Street (once home to the colonial-era slave market) and at City Hall (which was built atop the African Burial Ground), among other locations; they're a stark reminder of how America's history of slavery both literally and figuratively contributed to the construction of our nation's (and the world's) financial system. It's also a corrective to -- as Jackson Connor puts it in a piece for the Village Voice -- the "collective amnesia in the North that suggests slavery was strictly a Southern evil" because, in fact, New York (then New Amsterdam) was the "capital of American slavery for more than 200 years."

In her artist statement, Nona says her practice is "situated inside a photographic tradition [that questions] the culture that bred that tradition...through self-portraiture I explore issues about the black body within photography and history... The questions I address in my work are, why bodies matter? Whose bodies matter? How do you make interpretations of your world with what you've been given."

Her work, particularly arriving as it does during a time when our national discourse is looking more critically at ideas of racism, violence, and police brutality, adds a vital perspective and, hopefully, a jolt to the complacency so much of us may have when it comes to thinking about issues of race, the legacy of history and social justice. You can see more of her work below and HERE.

Nona Faustine, "Over My Dead Body" 2013
Shot at "New York City Hall, (built on top of the African Burial Ground)"

Nona Faustine, "Of My Body I will Make Monuments In Your Honor" 2014
Shot at the site of a "Dutch Pre-revolutionary Cemetery in Brooklyn. Where 3 slaves are buried, among the early settlers."