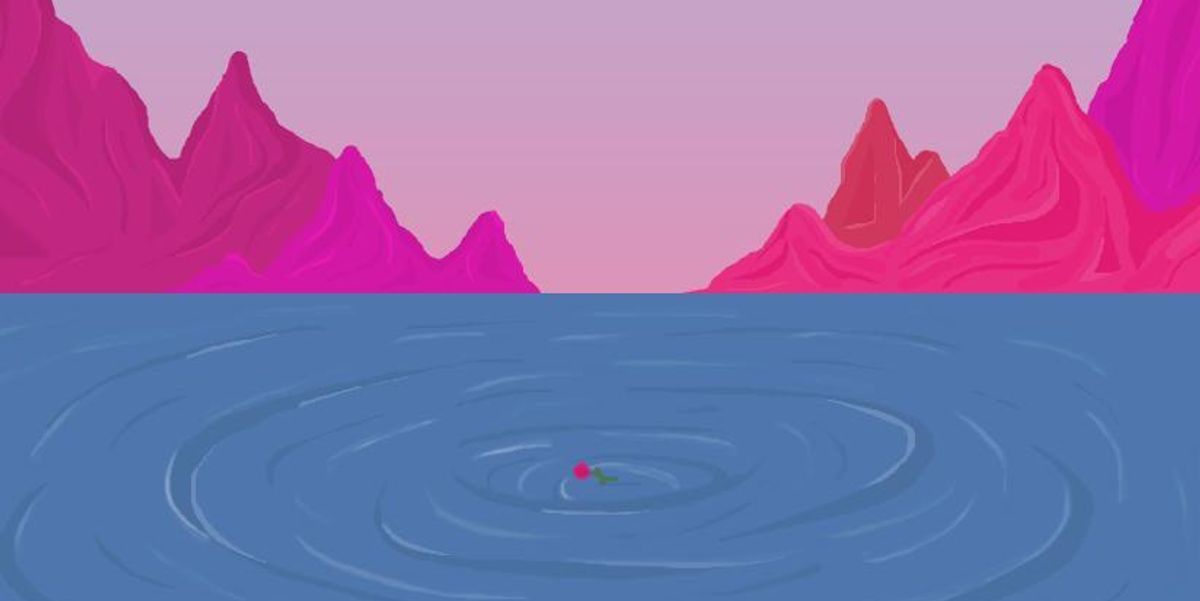 Sydney-based artist Miranda Lorikeet, or Lazybones, as she's known as on the Internet, pays her bills with a job in HR, but created an escape from the daily drudgery via the pre-loaded version of MS Paint on her work computer. If Georgia O'Keefe's flowers could be allegories for a vagina, Lorikeet's art is undeniably paying homage to female sexuality. Her illustrations, which have been shared thousands of times on Tumblr, depict naked women baring all in unreal landscapes where pink mountains, red suns and green oceans are the norm.

PAPER spoke with her about where her art comes from, how MS Paint--the all but forgotten vestige of our collective childhood--is viewed in design circles and how she became an unlicensed therapist to basically all of Tumblr.

Fall Together by Miranda Lorikeet

I find your work so transporting with its completely alien landscapes, do you use it in that way too?

That's actually how it started. When I got this job I had a lot of free time and I didn't know what to do at work. I found MS Paint on my computer and thought I should be doing something to fill the time. That was three years ago.

Not everyone would choose MS Paint to goof around on at work. What made you choose it over something like Solitaire?

Oooh, I never thought about Solitaire. I think it was a big nostalgia thing. In the '90s we had the first Windows 95 so I've been using it since I was a little kid. When I saw it [on my computer] I was like "Oh! That guy! Why did I ever stop drawing on that?" It felt very comforting.

Upside down//Inside Out by Miranda Lorikeet

Many professional artists wouldn't choose MS Paint as a medium, so when I first saw your art I was curious. "Is she making a statement with this democratic, accessible and almost obsolete drawing app?"

MS Paint is the butt of a lot of graphic design jokes. People like to be like, "Oh, did you do that on MS Paint?" and I love to be able to say, "Yeah, I did."

It wasn't meant to be a statement initially, but it has turned into it because I kept using it instead of moving onto Photoshop or Illustrator. People get really caught up in what tools you're using. I work with a lot of designers in my office and I hear a lot of talk like "What program do you use? I use this one, that one's rubbish, etc." I think it's got nothing to do with the tools you're using, it's what you do with them. So I'm trying to make a bit of a statement about that.

Your color palette skews to the more romantic side with pinks and purples and teals--and you only feature female bodies. Why?

With the drawings, I'm trying to create a dreamscape, and those are my favorite colors. It's so unrealistic--you're never going to see a pink mountain, but I want to see a pink mountain. A lot of the times the place I've drawn the picture from is a really dark place, so the titles for the pieces go back to that, which might not even relate to the picture in the end. A lot of them are based off of sad poems or really depressing things like nightmares. They add context to the picture.

The color palette [for my artwork] is feminine and reminds you of nice things like ice cream and candy and happy times. They're meant to take you to a happy place.

Do your online followers send you messages? What do they say?

It's really hard to keep up with messages, there's so many. I could make just answering messages a full-time job. They're really supportive, so I always try to give a response where I can because they're pretty much the reason I'm where I am today.

I get a lot of questions, like technical questions about how I physically do the drawings. But then I get asked a lot of life advice for an artist, which I didn't expect at all. I'll reply to those ones sometimes where I can.

Where's the line for you between being an artist and a public, accessible figure? It's not like you're a therapist.

People see my artwork, and I sometimes treat my blog like an online diary, so I think maybe they assume I know a little more than I do. Perhaps I present myself as a more worldly person than I am.

Art has always sort of been that way, a conduit for feelings. But it's not like Picasso was fielding questions about boyfriends or parents. Do you find it difficult? It's not your job to answer these questions or even put up this art.

The Internet is really weird like that. I put my drawings online, I don't know, because I could and now it's generated what it has. There's this strange culture where you put yourself out there on the Internet and people think they've seen your entire life on this blog.

I get to decide who I reply to and I get to decide who to respond to. Sometimes it actually helps them. A lot of my followers are between the ages of 13 and 27. I feel sort of obligated to reply because I didn't have access to something like this when I was 13 or 14. I have no reason not to give the random pieces of advice they ask for.

Girls Oasis no.3 by Miranda Lorikeet