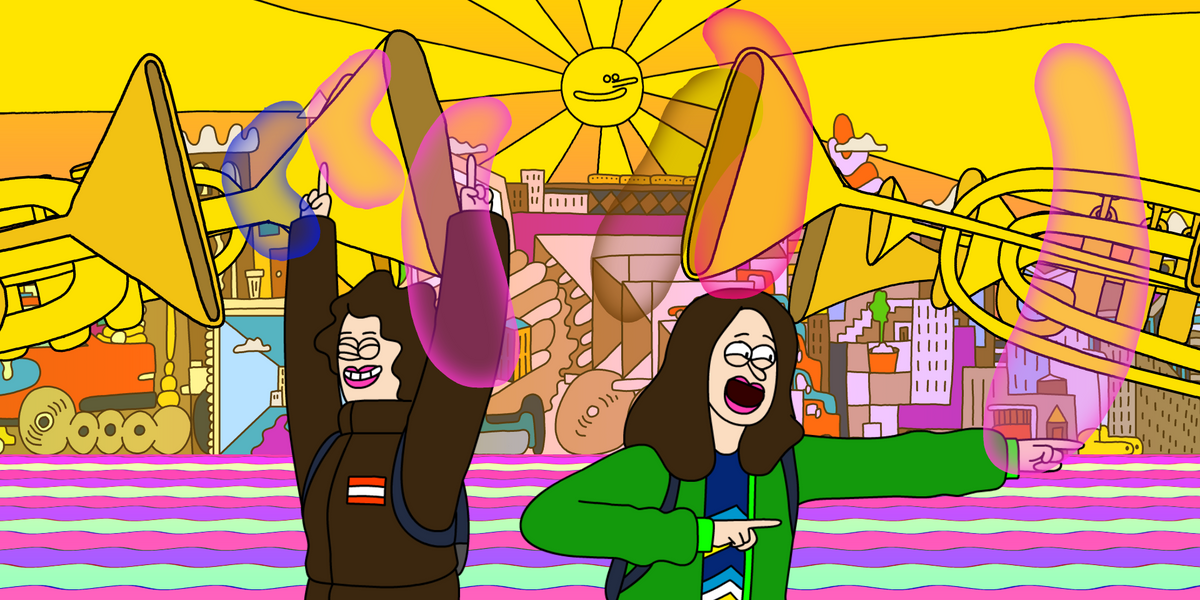 After chowing down on a mélange of mushrooms (shrooms included) mixed with yogurt, Broad City's beloved besties, Abbi Abrams and Ilana Wexler, commence their drug trip through a candy-colored, psychedelic, googly-eye-making Broad City world like we have never seen before. As Ilana says, "Welcome to witch world, baby." Last night's episode featured appearances from Bingo Bronson, Ilana's ex Lincoln, and a lake full of naked pregnant women--all illustrated by artist Mike Perry for the series' first animated episode. "I think we always thought about the girls eating mushrooms and simultaneously had always thought about doing an animated version of the show. This felt so right," said Abbi Jacobson. "Mike's drawings are already so trippy, like you're entering his brain. So this was just us as a team moving to another level of collaboration. We wanted him to go wild, and he did." Perry has been a long-time collaborator on the show; since day one he's been the artist behind the energetic title sequences. PAPER caught up with him to talk about the episode, the animation, and working with the Broad City team for the first time IRL.

What was it like translating Abbi and Ilana into animation?

It was a great privilege to have the opportunity to turn somebody into a cartoon. It feels like a cool responsibility. I thought that was really fun and interesting as an exercise almost into intimacy. How do these people look? How do they live? How is their gravity within the cartoon world? How does all that work? And then I got the script and your ideas just explode. You're like, Let's do this. Let's do this. Let's do this. And then next thing you know, six months later, you have a cartoon.

Did either of them have any special requests in how they were portrayed as cartoons?

No. It was cool though. We worked with the wardrobe styling team to make sure the outfits transitions through the thing. So there's live action and cartoon. They're wearing the same outfits. So that was fun. For instance, Ilana, her character, she's got her like big winter coat on. It was kind of like an easy opportunity to like not draw her feet. Right? So she's floating the whole time. It was like just an easy way of not having to deal with that. And then just working with the wardrobe team and the hair and makeup team to like just dial it in, so it seamlessly transitions. It's just fucking cool.

Actually, to be honest, I've had a bit of a satellite relationship with the show because I do the titles, which I've been doing since day one. That's been really fun and amazing. It's the kind of thing I do on my own. So this is such a fun thing because I got to work with the whole team. All these people I had emailed with for years, I got to spend time together with in real life. In fucking real life. That's why we're celebrating, because it's just this giant team effort to pull this thing off. It's celebrating the lost nights of sleep and the hours spent just making one drawing after another.

What was your favorite part working with Abbi and Ilana on this episode?

From the start, getting the script, doing the storyboards, and all that stuff to when we handed it over, was six months. It's crazy. The thing that's so stellar about them is that it's like, "We want to do a flying sequence through a bunch of pregnant naked women in a giant lake surrounded by hearts." It's like you throw that idea out there and they're just like, "Boom, let's do it." Every piece of feedback in the dialogue was such beautiful exchange and such true collaborative effort. It's fucking awesome.

After seeing the episode, I'd love to learn more about the cartooning process. What were you thinking about when developing the aesthetic?

I was just trying to figure out what the Broad City world looks like as a cartoon. It comes from mostly from my life in the city. Just drawing buildings and trying to figure out the architecture. Then slowly over time you figure out how to draw the generic building that represents New York. You work on it and you throw lots of them around there, and then all of a sudden have this fantasy world of buildings that are references from the real world filtered through your brain.

What makes the animated world and life of Abbi and Ilana special?

If time needs to slow down for a second, it's all good because you're tripping your face off.

The live action mixed with cartoon was so funny to me. It took me back to Space Jam and Michael Jordan running around with Bugs Bunny. What were your inspirations?

Honestly, we had had a conversation from the beginning about the phases of the drug trip. The script that came in originally had the whole structure broken into these phases. Phase one: there was a little bit of color and flourish around, a little kind of ambiance. Phase two: there's eyeballs. Phase three, which is when they're cartoons in the world. And phase four when they're fully animated. It was always kind of designed from the beginning to really celebrate the trip. So that you slowly start to feel it. You feel its height, its peak -- that's when there's some crashing and the waves are going. Things are a little epic. There's sound and everything's beautiful. And then you slowly transition out and through that transition there's ups and downs. Toward the end, you're just left over with some residue and the residue is what takes you through the night and keeps you connected to your trip but also reminds you that you're a part of normal society.

You definitely feel that. What kind of feedback did you get from Abbi and Ilana?

The feedback was always very positive. We really enjoyed the positivity of this scene and the ups and downs of this scene. For instance, the cucumber scene where they're walking, I had them both just as generic cucumbers with no shape. They came back and were like, "Let's have one of the cucumbers have the ambiance of Ilana's hair just so we can differentiate the two." Things like that are just getting into the subtleties of the characters and trying to make sure we capture them as the people and they way we represented them.

What was the most memorable thing you guys discussed about the drawings?

The thing that was the most exciting was the conversations about how we wanted to try to capture this positive experience, this positive trip where it's about love and friendship. The conversations about them trying to grasp their relationship as two beings going on this trip. I think that was the thing that I liked the most. We put all these sentimental hearts everywhere and trying to connect the viewer always back to this feeling of love and positivity.

Will we be seeing more of this from you?

This interview has been edited and condensed from two conversations.