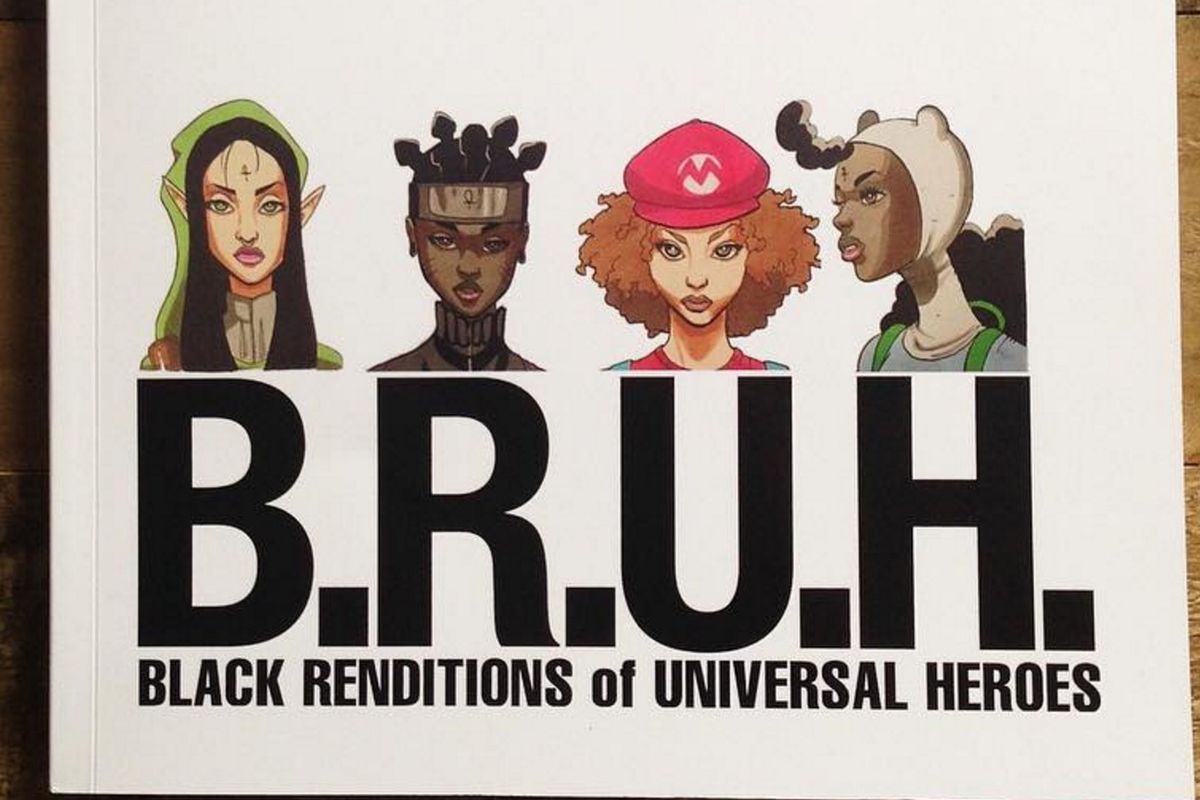 29-year-old artist Markus Prime rose to Instagram fame via his narrative-altering, gender and race-swapped creations that reimagine landmark pop culture characters ranging from Dragon Ball Z to The Powerpuff Girls -- and now his sketchbook, dubbed BRUH (Black Renditions of Universal Heroes), chronicling all these flips is finally hitting shelves come April 1st...And just when you thought it all stopped with his work on Amandla Stenberg's groundbreaking comic, NIOBE: She Is Life.

An artist who fills in the unfortunate gap re: intersectional representation, we knew as soon as we saw these images that the LA-based artist would be one to watch -- not only as an artist, but as an activist fighting for a more truthful media rendition of the world at large. Read our Q&A below to learn more about the characters he chose, why a sketchbook and, most importantly, why supporting youth of color is the most integral part of this all.

For starters, why don't you tell me a little bit about the project itself. Where did this idea come from?

Basically BRUH (Black Renditions of Universal Heroes) stems from me looking at a lack of representation in the animation and comic book field. It was just a little idea. I had already been kind of known for drawing different clips of popular superheroes and cartoon characters, so I just thought that it would be a great contribution -- especially for a time period where people are becoming more aware and trying to push the idea of representation -- and I just thought it would be a great project to add to the conversation. I pretty much gathered a lot of my more popular images and created some new ones, and decided to make a book.

How did you start illustrating? Was there a particular moment, also, when you were like, I want my work to have a socially conscious edge?

I've been drawing since I was a toddler, but as a professional I've probably been illustrating for about five years. I think that the moment when I decided to make it socially-conscious [was totally natural] -- it kind of flowed into that about three years [ago]. I think I've always made statements in my work, but when I decided to focus on black women and their issues, that was probably about three, four years ago. As I noticed my platform start to grow, and more people started paying attention to me, I felt kind of an obligation, because I realized how little black artists there were actually doing anything. I don't necessarily want to be an activist, per se, I just felt like I could say something. I could find a creative way to at least get the conversation started, and get people's minds open.

And the issue of representation is particularly bad in comics and animation, right?

It's very bad. I feel like it doesn't reflect the country that we're in. I feel like in the year 2016, there should be far more representation. This is not even just limited to black people, but to people of color in general. I've been fortunate enough to live all over this country, and just based off of that, I can already tell you that we're clearly not evenly represented -- in television, in comics, in film, in movies, in general. But you can't blame everything just on one particular situation. I think a lot of it is that we're also just not [present] in the industry, there aren't a lot of creators of color able to make their stamp in the industry as well. So that's why I kind of took it upon myself to be a part of the solution, since I do have the platform. I want to try and help instead of complaining, and use my gift to get that conversation going. I try to work on original characters and things of that nature too. But I feel like since it is a problem, I can also inspire more artists of color to draw things that they identify with. It'll slowly start helping.

How did you decide which particular characters to reimagine?

Well what's crazy is I didn't really decide. They just kind of pop up. I don't necessarily have a structure. When I create, I'm very spontaneous. Dragon Ball Z was the first one, and I've always done that one since I was a child. When I was in middle school, I used to draw my own black version of Dragon Ball Z. At the time it was all men. But [the Dragon Ball Z flip] came kind of natural -- one day I redrew Goku as a little cute girl with an afro. Fro-ku kind of just popped up and it made perfect sense -- I guess given her personality. I think that's how I pick the characters -- based on how I can give them personalities that make them unique. Fro-ku has become very popular, to the point that people see her as her own individual character, not as a remake of Goku. Every character I've picked, it's more of a question of how can this character become an individual? Even in Adventure Time, I heard Fiona came from a fan. That was a fan creation, so just like that, she existed. That's why I think it's funny when people are offended by the fact that I'm flipping these characters. When it's a white character, nobody cares.

So why focus on black women rather than black men?

It's always hard for me to answer that, because it wasn't deep for me, I didn't really think of it as a big deal at the time. I just noticed that it was a void. I could have easily drawn black men. I did when I was younger. But for some reason, I just felt compelled to draw black women. Number one, because a lot of my art was a journey for me -- I was learning a lot about myself as a man and also trying to learn a lot of things. You know, we have a lot of ways that we present black women in media and how we treat black women. I'm trying to learn to re-approach how we represent black women. It wasn't necessarily "I'm supposed to do this" or "I have to," but it just felt natural. I might change it soon, but that's what I've been doing right now.

Is there something to be said about identifying with these characters you're drawing?

Absolutely. I think people are looking forward to the characters. Like, Fro-ku is [a character] they see themselves in --it's believable to them. There's pictures of her where she's struggling to pick her afro out, or eating a lot of food. Or I have the Afro Puff Girls, and they're learning about black history from Professor. I try to make the characters actually do things that a young black child would do, not necessarily just remaking the same situation that The Powerpuff Girls would do, if that makes sense. And I think that's why people identify with them. I had a picture of the Afro Puff Girls where they're trying to do each other's hair, which is a real struggle. People identify with that, obviously, because that's a common struggle with young black girls. Our hair is obviously very tough, it's not just a walk in the park. And also in terms of the diversity, I try to give each character different features. I try to not just stick to one skin tone -- [that said] I haven't covered every base. A lot of people have different requests and demands, but I can't do every single one just yet, but I'm definitely trying.

Wow. I am curious though as to why you decided to release this sketchbook format as opposed to creating a narrative around just one character.

You know, I didn't want to get too comfortable with creating a universe for characters that were remakes. I also believe very strongly in original characters. I have other projects that I'm working on with original characters that I'm about to put more passion and effort into. This project was simply to get the conversation out, to have more people say "Oh, that would have been cool, I really like this interpretation of these characters" -- almost like a remix to a song, like "I like this approach, or I like this version of it." It's more just to make people think and change the way young children of color think.