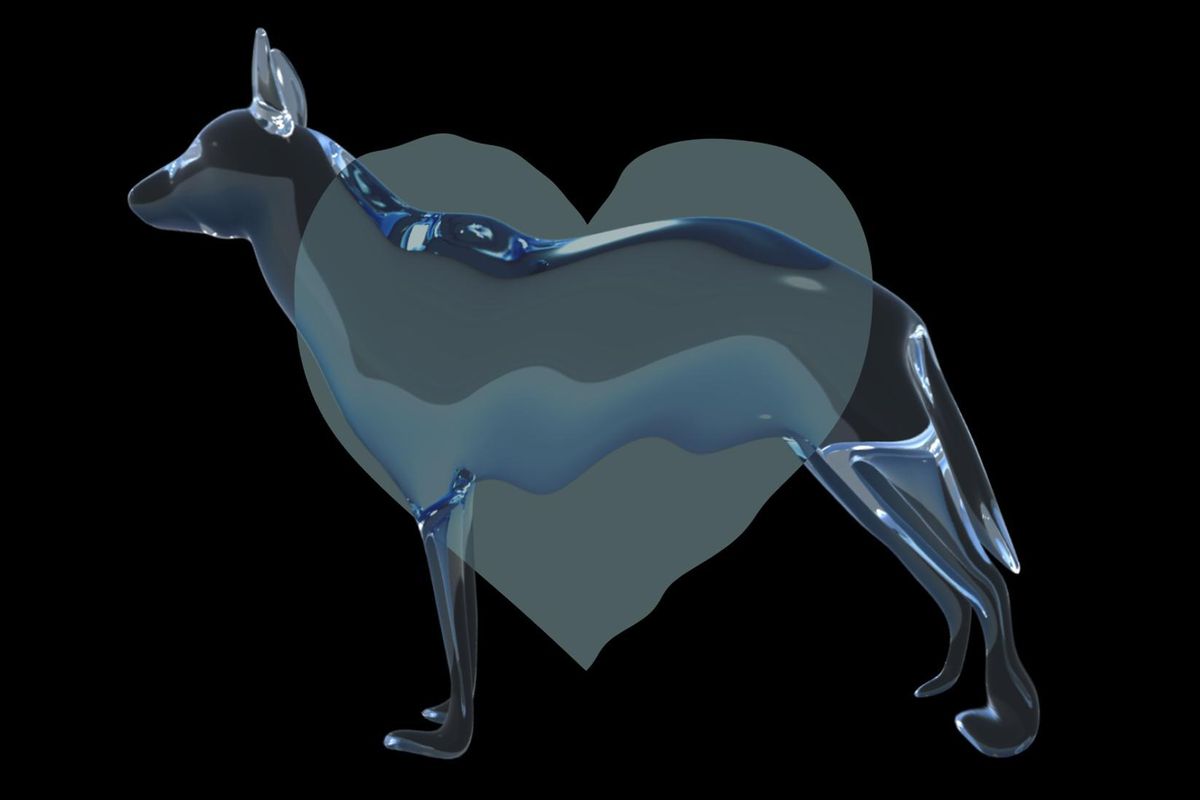 Our friends at NewHive are currently in the midst of a two-week-long series of commissioned artworks exploring privacy, surveillance and prison reform, and in conjunction, we'll be running a series of accompanying interviews, features and essays by the featured artists. The eighth installment of this series comes in the form of an artist diary by Sara Ludy about her project Dog Dream Dance Prison.

Artist Sara Ludy's practice investigates the confluence of the physical and virtual. Dog Dream Dance Prison is an animation that she created for the NewHive series on privacy, surveillance and prison reform, exploring the relationship between prison therapy dogs and prisoners in correctional facilities across the country.

Ludy takes us behind the scenes of the work, discussing the piece's inception and how it evolved.

I began the project with image research, trying to find content that would resonate with me and that I felt comfortable using. I came across [an] image of a therapy dog in prison and then went deeper. I learned that some programs have been active since 1981 that train and rehabilitate dogs, who come from a wide range of circumstances: some have no home, some are on a list to be euthanized – like greyhounds who are no longer racing (thousands are killed a year), younger dogs who will become service dogs (it's cheaper for prisoners to train them as it can cost up to 30k a year to train a service dog). I also found that there are prisons that have exotic animals like the Monroe County Sheriff's Office Animal Farm in Florida, where there is a sloth and a giant tortoise. There are also programs with horses, where inmates help tame and rehabilitate them.

The first program of this type was Pathways to Hope, founded by Sister Pauline Quinn in 1981. Quinn ran away from an abusive home at the age of 13 and was placed in mental institutions, chained and tortured, as a result of the lack of programs to help children in those circumstances. After enduring years of abuse and trauma, she came across a stray dog who opened her up to love again. She decided to share her life changing experience and provide a program that would do the same for those who are in isolation. She founded the first program at the Washington State Correctional Center for Women.

I found this to be beautiful, how two beings with no love find a way to love each other. Yet as I conducted further research, I would come across a news clip that paired upbeat music with a newscaster interviewing an inmate convicted of second degree murder and rape. I couldn't reconcile this dichotomy, and my research became surreal and convoluted. I began to see that we create murderers as a result of lack of resources available (public health, education, financial, etc.) who take love from society. These people are then locked up in isolation and we create healing programs for them with animals who have no love and will otherwise be killed. It's a multilayered situation.

I decided to abandon my image-based research and just channel all this dichotomy into an animation. I began by isolating a color palette that was related to prison: hazard orange, burgundy, denim blue, chrome, pale green. I developed this space that was intended to feel like a music box, a dance loop that represents a moment of freedom and dreaming. I created this monster-like figure, duplicated and rotated it to hug itself–expressing the theme of self-love. The interior is bright, as I wanted it to feel blown out, mimicking the strong lights in the common areas of a prison. The central figures are shown as sort of golden color, yet their reflections in the mirrors are more flesh-like and red, pointing towards the way in which we view inmates (how they're reflected back to us), as monsters stripped of their human traits. I then overlaid another animation on top of the interior, which provides something on the surface of the imagery: something that separates us from that space. I wanted to keep a distance.

I also found this free silly music (thinking about the absurdity of it all and also the weird news clips) and added some reverb to the dance scene to make it seem like it's playing there. The structure just happened intuitively, from a play of imagery, music and ideas. There's something slightly video-game like about the music and I played with that for the dog/heart segment. If this was a cutscene in a game, it would be a moment of collecting love."

Sara Ludy's works include websites, animation, video, sculpture, and audio-visual performance. Traversing the online virtual world Second Life, Ludy photographs domestic interiors, landscapes, and other scenes that are iconographically familiar, yet feel otherworldly. Alongside this practice, she three-dimensionally renders architectural forms and sculptures, each one imbued with the mysticism of the digital uncanny: a space between what is known and unknown, within reach but just out of grasp.