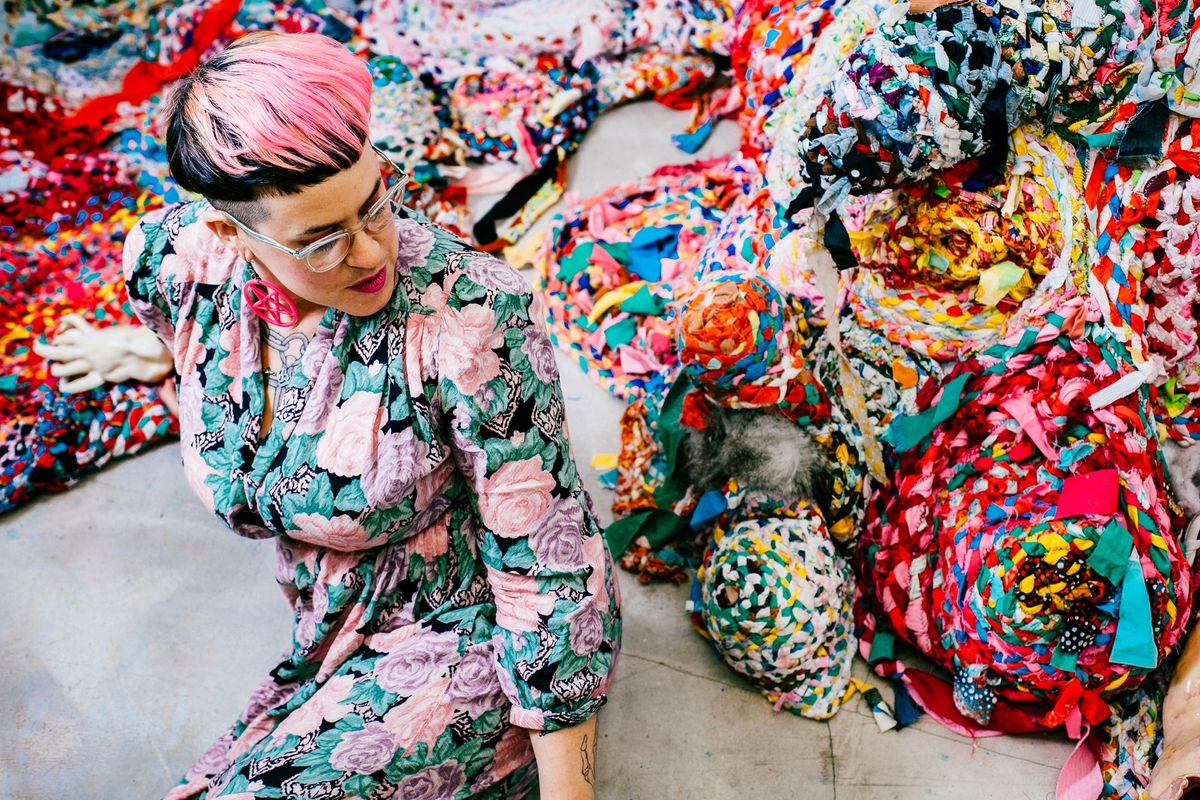 Creating fantastical worlds out of textiles and ceramics, Brooklyn-based craft artist Caitlin Rose Sweet uses otherworldly imagery like grotesque ceramic fingernails, forests of braided fabric and oddly-shaped vases with legs to explore bigger themes of femininity and queerness. In her forthcoming show, Snake in the Grass (opening March 4th at Long Island City's academic), Sweet envisions existence beyond the constraints of our society by dramatically reimagining the depiction of female sexuality in Hieronymous Bosch's legendary, dizzying triptych The Garden of Earthly Delights.

As such, we knew we had to catch up with her in the midst of preparing for her opening to talk craft, that crazy Bosch and queer femininity, as well as the abject body horror of it all.

What drew you to craft art, and what kept you making it?

I was raised by hippies. My dad was a craft artist and my uncle's an artist, and I was oddly taught as a young child to value art and craft and making and production, which foolishly led me to art school and getting an MFA. I have to make art, it's what I do, it's the only thing I'm really good at. Art has just always been a part of my life, and in a craft community you see people sell their art, so [art was] also presented as an option. You know, valid labor.

Do you think the art world sees craft as a lesser form of art making?

Well, yes. I feel like there's been a lot of thinking and writing and making about the divide between art and craft...and it's something I think a lot about. But it's also something I try to forget about. [I] just do what I do. I think in traditional ceramics. The things I make...they aren't functional vessels and it isn't showcasing a traditional sense of craft and skill in the way things are supposed to be made, [so] there's a tension there. And also, because I pay my bills by selling a design line that's related to my art, I very much intentionally have my hands both in the craft and the art world. I feel like there's tension there that's not always productive unless you're making fun of it. It's a weird historic art/craft beef that's humorous at times, but it does affect resources and money and stuff like that.

I feel like [art and craft] gets talked about in a really binary way that I feel disinterested in. People talk a lot around this stuff, but a lot of it is about class, and thinking what is important labor. Those conversations are interesting to me. And as someone who's a craftsperson, but a conceptual craftsperson, I'm not really anyone's favorite in that binary fight. I'm right here in the middle. So sometimes I just tune it out.

What drew you to The Garden of Earthly Delights?

It was actually a really impulsive decision, but one that makes sense. When I think about when I get the chance to make installations—which isn't often, because they take up space and they're not really something you can market and sell—it's really nice...because I can take up as much space as I want. I'm a size queen, I'm a maximalist. I think of these installations as ecologies. So obviously, "ecologies" and "garden" was a really easy association.

Also I keep making work about complicated and queer femininity and how weird and amazing our bodies are. I really think of my work as body-positive work, even though it's very abstract and kind of grotesque. [But it's] also kind of seductive -- and "Snake in the Grass" is this saying that depicts a deceptive, manipulative woman. So in thinking about representations of femininity and how to complicate them, and how to reclaim things and basically fuck with things, it just seemed like a really natural pairing. It's funny, it's such an iconic painting that everyone I tell freaks out [about]. So I feel an extra pressure and weight to be referencing this thing that so many people have this really instinctual relationship with. I've been obsessed with it since I was an adolescent.

Yeah, I saw it in high school art history class and was totally transfixed by it.

I feel like it's maybe a flag for young weirdos, when someone presents it as an important representation of humanity. A lot of people talk about it as this moment when they [realized they] were a total weirdo freak and they were into it.

It's also amazing it was made so long ago, but it looks like it could be surrealist. And also the fact that no one knows anything about Bosch at all…

That's also the thing I love about it. I love surrealism, I love abstraction, and I love the thing about queerness in the sense of the unknowable. It's this representation of bodies and body horror, it's weird as fuck, and people are like, "We have no idea. There are some things that reference the religious painting of the time, but we also have no idea." I love that because it allows people to have their own associations and relationships with it. It's rare to find a painting that so many people have a visceral and enthusiastic "yes" to.

Would you say it's a queer painting?

Yes and no. Are we talking about queerness or queer? I sometimes have this thing about queer theory where it opens it up so wide that it removes actual queer bodies and experiences.

Right—it can make anything subversive "queer."

I feel like queerness has this amazing visceral snag where people get snapped out of the paradigm and are like, "Yes, this is so wrong and horrible and I love it." I feel like it has those aspects.

I talked to people about [the painting], and listened to people's stories about it, and I looked at the painting every day; it's kind of burned into my brain. And there is something about that amazing body horror enjoyment, which I think is really associated with queer experience. So in some ways, yes, it is [queer], but was it necessarily produced by a queer person about a queer experience? I think those are different things. Is this made by a queer artist about a lived queer experience or is this something we can project our queerness onto?

It is a massive and dense painting, so I decided to focus on [the center] pool of women bathing. It's encircled by men riding horses and different beasts. Some art historians have talked about it in the sense of needing to enclose and protect female sexuality, and a lot of my work is about the association between the feminine body and the vessel. In my work, I try to pretend I can remove a heteronormative, patriarchal view from the subject and the space, and let feminine bodies evolve to be something else. That's my fantasy magic ability of my art. So I took this idea of women bathing, and what would happen if there was no guardian.

If someone came to this show and they had no idea what The Garden of Earthly Delights was, what would their experience be?

I think my spaces are designed as this really immersive environment. It's this oddly disturbing soft, cozy, sexual, abject, very hyperfeminine environment. There are these mounds of pink braided rugs that are growing fingernails… And I make people move through the space. The work is down low, people have to bend, it's not an eye-level experience. People get to walk through this wonderland of objects kind of living with each other. It's very seductive, grotesque, people want to touch it…

And can they touch it?

Well, not in this show. But that is something I've played with. I let certain elements of my work grow as subjects of their own. I have these rugs, and I did these community braiding events, where people would come and hang out and braid, and I would sew the braids into rugs. The rug grew with community activation. And I have some textile pieces that play off the idea of body pillows. But with the hyperfragile nature of ceramics, it's really hard to invite people to touch. And because I put ceramics on the ground, it's a lot of watching people become conscious of another thing's fragileness. But I kind of do feel like ceramics should be touched. A lot of our relationships with ceramics—mugs, toilets, plates—is all about touching. But you just can't have that at an opening, unless you're really prepared to let the pieces get injured.

Snake in the Grass opens March 4 at Academic Gallery in Long Island City.