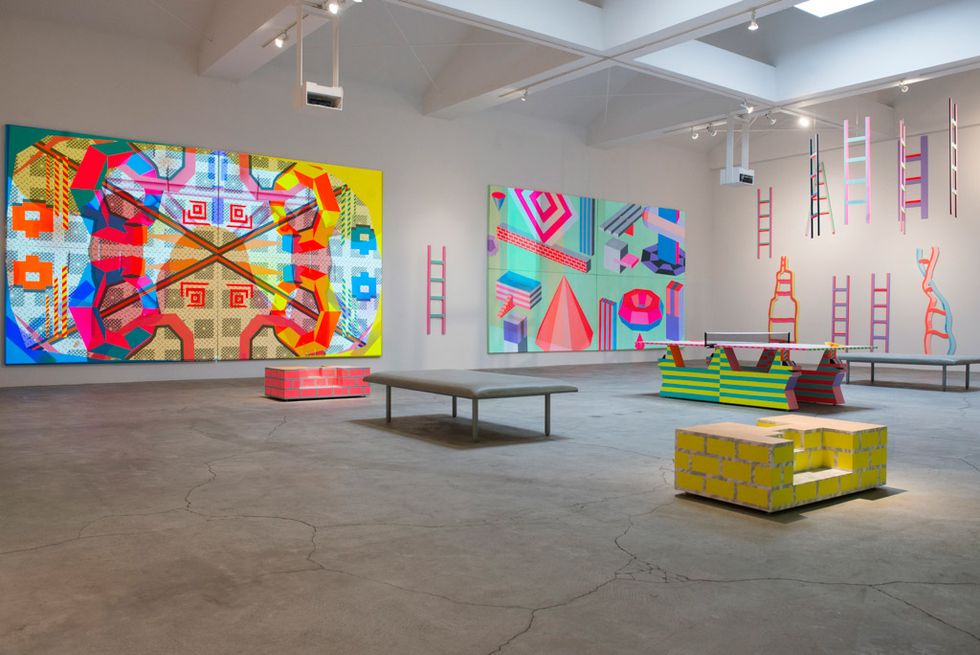 Artist Ben Jones On His Recent Show, Digital Utopias and the Power of Projectors

by Kevin Shea Adams
PAPERMAG
Los Angeles-based artist Ben Jones has tangled with so many different media -- from HTML, to furniture, to Miley Cyrus' body -- that seeing his work in museums or at his recent take over of the Ace Gallery in LA should come as no surprise, but maybe he's happy it does. Co-founder of cult website PaperRad.org and perhaps one of the most influential tricksters of the Web 1.0 landscape, Ben chatted with us to reminisce about the future.


So I think Paper Rad was the first place I visited regularly to watch videos on the Internet.

What a crazy time... If we only knew what was going on at that point! There was no weirder intersection of power and the misuse of -- rather the good use of -- technology. And people actually went to websites back then. You would actually type in a URL, it was a conscious thing.

It sort of seems now like that was the Wild West. You paid people a visit, you "called on" them at their URL, it all sounds so old fashioned. But I wonder: are you sensitive to the different online contexts we have now? I mean Tumblr vs. Instagram vs. YouTube etc... is it all still just "Internet"?

For me, I'm an introvert and I like to find things on my own terms and the old internet was kind of all about that because you had to do your research -- it was up to you to find these things. When things like Tumblr or let's just say social platforms in general came on the scene, it became more about aggregation and curation. People's identity became tied up with what they were looking at and trying to telegraph or show other people what you're into. That's not my style -- I much more prefer the under-the-radar Sherlock Holmes work of going and finding crazy shit rather than turning to a blog or some statement of style.

But what Instagram has done in a nice way is let you present these discrete ideas where you can build these little galleries and places to present ideas. Of course there's the social nature of it but also it's a visual organization of content so you can go down wormholes of artists or follow ideas and connect things that way. So to answer your question about platforms -- but first and, very importantly, I don't give a fuck about the platform when it comes to making art -- my art and Paperrad's art, was completely platform-independent. Whether it's a movie, a comic or a VR experience I'm only ever interested in the ideas and the characters and the stories; it's never meant to be a comment on the form itself. I think actually that's why I end up working in so many "mediums" and you can see that even in the gallery work, mixing video and painting and ping pong tables all while working on a TV show. I'm trying to get across this language and these characters and these stories and these ideas and how they end up manifested is secondary to that initial impulse to work within this kind of language, constructing it, exploiting it...

It seems like you make those transitions between mediums and contexts very smoothly. The ping-pong table at Ace Gallery feels like a part of that language.

Ultimately it's world-building. Because these ideas have a consistent language you can scale them up and that was always one of my tenets to make these scalable ideas whether they're made out of cardboard or CNC'd meticulously cut and painted MDF [Medium-density fibreboard], it was always about the idea and never really about the form that it took. For example, we did this project in Miami with these 100 ft. tall inflatables but the idea there was the same as when we made little handmade dolls.


Recently in New York they lit up the South face of the Empire State building and it reminded me of Cinema Paintings, which use a projector to throw light onto a painted canvas. I'm wondering if the projector sort of represents this need to bring the Internet or whatever you want to call this saturated world of free-flowing images that we half live in now on top of the IRL world.

You talking about this is kind of exciting because there is a bridging of that gap between augmented reality and virtual reality and IRL. Everything used to be hardwired to these big CRT monitors and then came phone screens and now watches and glasses but I think the projector is kind of the ultimate. Projector technology is going to be out of control -- there's a Korean company putting projectors in phones so you can project anywhere and obviously that gets us into holograms. As much as I never want to comment about the tech I'm 100% a proponent of it. You know I'm a digital artist, the first thing I ever did on this earth was fuck around with the computers my dad would bring home and I've been using those same computers and those same basic operating systems to make these worlds and these drawings and projectors and so I think LED technology, wearables -- it's all awesome. I want to be living in the movie Her today.

It's funny how Paper Rad anticipated a lot of things stylistically. The dominance of hyper-mega-pop music and these sort of overloaded visuals and cultural collisions that happen there.

It's insane... If you had said that Hip Hop was going to have deep trance tracks playing in and over it -- this is like a Paper Rad joke right now. But it's not just Paper Rad. For example, I remember a friend went down to Brazil and they did all these field recordings of Baile Funk music and put it out on a mixtape called Your's Truly. They were noise kids (Ivanna and Chris) and they would play noise concerts and do these little dances to it and then a couple months later Diplo put out a mixtape with that music and next I heard that music go direct to M.I.A who had at the same time completely separately contacted me to do her website. What I'm trying to get at is certain ideas have appeared in history at the same time in different places across the globe. Calculus was invented in China and the Middle East at the same time by different people who could have never been talking to each other. This aesthetic, whatever it is, is unstoppable and Paper Rad was in a good position to put a name to it and formalize and put it out there. And weirdly enough my new art show, which we installed in this super fancy gallery in Beverly Hills, at the last second I took a step back and just had to laugh. You know, this is just a Paper Rad exhibit. It's just a more formal, polished Paper Rad exhibit and I'm so proud it's still going and not in some way like Carrot Top or Gallagher who just rehash the same material over again. I hope it's more of a David Bowie type of journey where we can keep re-inventing and re-distributing these ideas.

I like the phrase you used earlier about "world building." It's kinda like we grew up in this time where we were the guinea pigs of the Age of Information and I can remember the first Nintendo under the Christmas tree. I feel like in some of your imaginary places like Echo Cove or Cheeseburger Island there's these utopian digital landscapes that are almost nostalgic. I wonder now that we've all grown up, are you happy with how the Internet turned out?

You're referencing something amazing which reminds me of a New Yorker article about [video game designer] Shigeru Miyamoto. He actually spent his childhood going through caves looking for mushrooms in a rural village in Japan -- he wasn't some nerd, he was literally living these ideas in a kind of surreal childhood and turned that into Super Mario Bros. Well that game in a way went on to inform my whole life and I guess I don't think there's been a direct product from that. We haven't had the proper harvest of those seeds that were planted and we haven't seen their potential fully yet. So to answer your question about how the internet has turned out, I don't think we've seen it yet so I'm not happy, but I'm not sad either. I hope to see that stuff soon once our generation really starts to make movies and VR and all that stuff. It's going to be amazing -- we are going to open these doors to this Narnia that we know is out there. You've seen glimpses of it, but it's still mostly been the past generation in the spotlight. Every movie about the internet is essentially some 8bit Pong based stuff -- there hasn't really been a movie about the Internet yet and that's fine. We're going to start making those movies, that art, that music and it's going the amazing.

Going back to your gallery show at Ace. Knowing you mostly from your digital work it's interesting to see your paintings and installations in a gallery context.

This is the biggest and best gallery I've shown at. I've done some big museum shows -- the shows we did at Deitch projects were on a huge level -- but the thing about the Ace show is that it's the first and biggest and best formal presentation of discrete works of art. It's almost an installation-based exhibit but it really has about four different bodies of work that I've been evolving and bringing to fruition over the past 10 years. So the context is a bit more serious a bit 'Art' but I think these ideas are good in a way that's still not completely decipherable. Super stuck-up curators from New York think that it's just advertising and advertising thinks it's super stuck-up art from New York, people on TV think I'm an Artist, and people in Art think I make TV. But I'm definitely still making work that hasn't been fully exploited by myself or others so it's really exciting.

The work is ultra-clean. Photos of the show almost looks like renderings.

It's funny because I look back at the early Paper Rad stuff and I'm like, this is such shit! But I know exactly what I was trying to do and I'm now in a position where I have a better hold on production and fabrication and visualizing things so I'm able to achieve those same ideas but in a more effective and clean way.

I can see that evolution in the animation for Stone Quackers -- it has this dreamy old-school Disney kind of patina to it, like it was made from a version of Flash from the '70s.

Well we were on the East Coast -- you're not supposed to do animation on the East Coast! There's one place you're supposed to do animation and that's with students from Cal Arts. I mean that as a joke and also in a serious way. Moving to LA has let me plug into the birthplace of animation, which is Disney and while I'm not working for or with Disney I still kinda am because Disney started Cal Arts and all of my all-star animators are from Cal Arts (plus some from SVA). That said, Stone Quackers is a love letter to Miyazaki and Panyo and I think you can pick up on that.

Photos courtesy of Ace Gallery
You May Also Like
Music