Updated: Arthur Memes Have Officially Taken Over The Internet

[UPDATE 08/04/16, 10 a.m.: So looks like the family-focused network behind Arthur has finally gotten wind of the sexual nature of many of these memes (see below), and needless to say, they are not happy. According to the Associated Press, WGBH is "disappointed" in the explicit strain of memes currently floating around as their hope is for "Arthur and his friends will be depicted in a way that is respectful and appropriate for all audiences, including young Arthur fans and their families." Not sure if you've been on the Internet lately, but ok.]

Last night, something strange began happening on Twitter. In between all the DNC coverage and The Mystery of Melania Trump's Mysterious Vanishing Web Presence, a screenshot of a cartoon fist belonging to PBS's #1 anthropomorphic aardvark, Arthur Read, began making the RT rounds.

This is just a pic of Arthur's fist but idk how I feel that it's just so relatable. So many emotions in one fist pic.twitter.com/WHU9o7XeAG
— JT (@AlmostJT) July 28, 2016

Taken from that episode where Arthur gets in trouble for punching his little sister DW, somehow the clenched fist -- accompanied with a myriad of updated sex, drug and pop culture-related quips -- floated back into our collective millennial conscious. Perhaps as just another example of the 90s nostalgia cycle -- even if this iteration does feel more potent as a meme that caters to the young adults struggling to buy a ounce and remember their Prime login rather than finishing their homework.

"this email and password combination could not be found" pic.twitter.com/RefqffLF8A
— Ziwe (@ziwe) July 28, 2016

And, of course, the hands have their own dedicated Twitter already.

When you offer someone food to be nice and they actually say yes pic.twitter.com/gu3K3cxTKV
— Arthur Hands (@Arthur__Hands) July 28, 2016

And while amazing, these Arthur memes are not exactly new (at least in Internet terms), as they look to be a continuation of stills and screencaps coming from (surprise) Black Twitter, Tumblr and beyond. Behold. 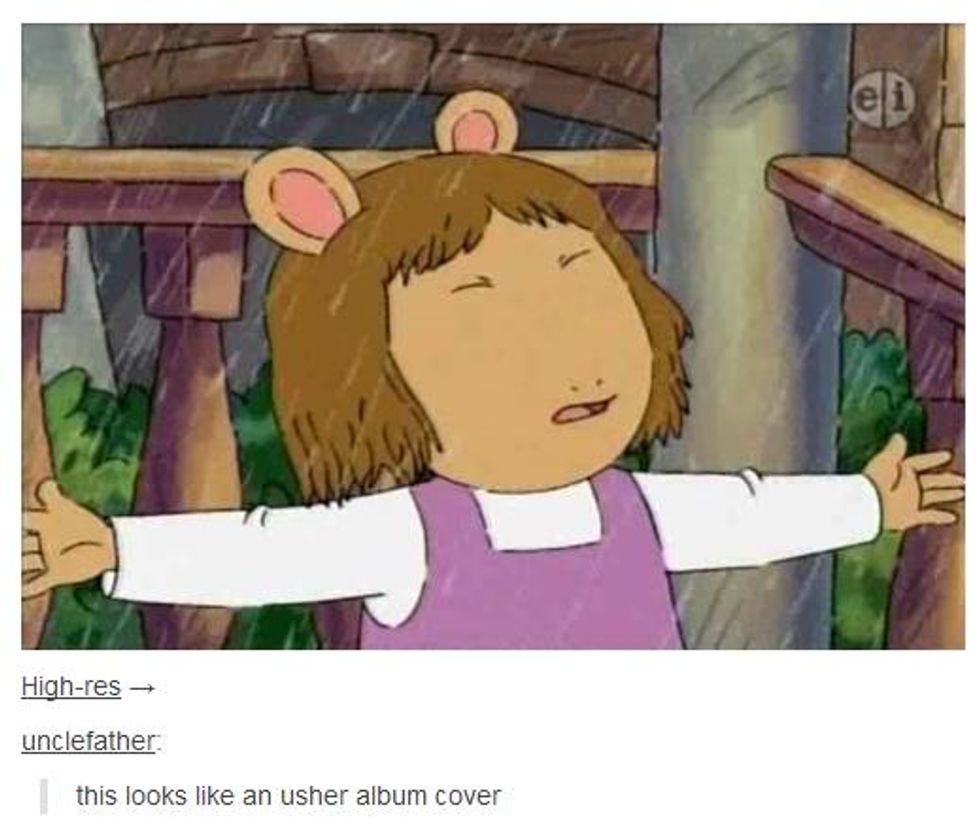 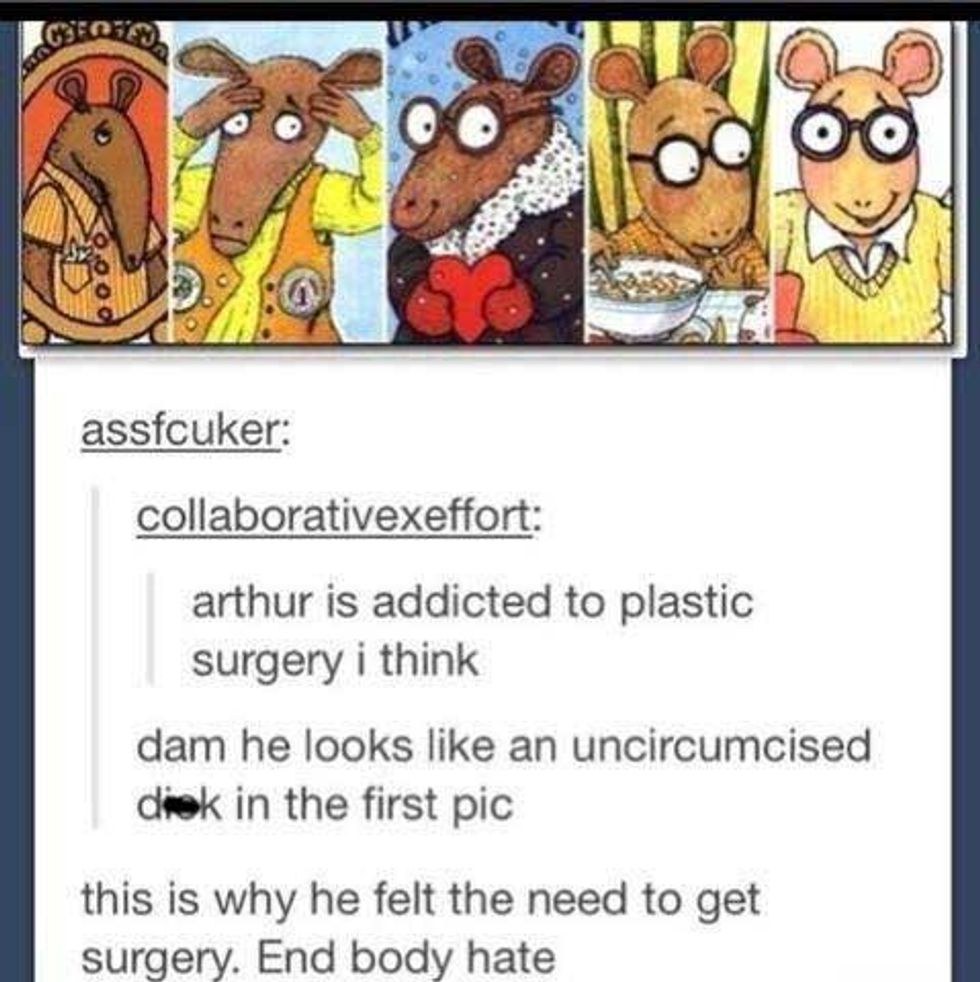 Granted, we're pretty pleased at all the new #content that's arisen from this fist-induced rebirth.

And like any good meme, it adapts to pertinent talking points. Several Arthur characters (notably RABBITS) have been spotted around the web making fun of the "All Lives Matter" phenomenon.

After you're finished lurking and you gotta have a sit down with your man pic.twitter.com/gW3upzIA6d
— sad p (@bloopie_) July 28, 2016

But, of course, the majority are just dumb lols.

When you're at the plug's house and wanna make conversation pic.twitter.com/jFH3yW5rGw
— Remy (@tdaniadi) July 28, 2016 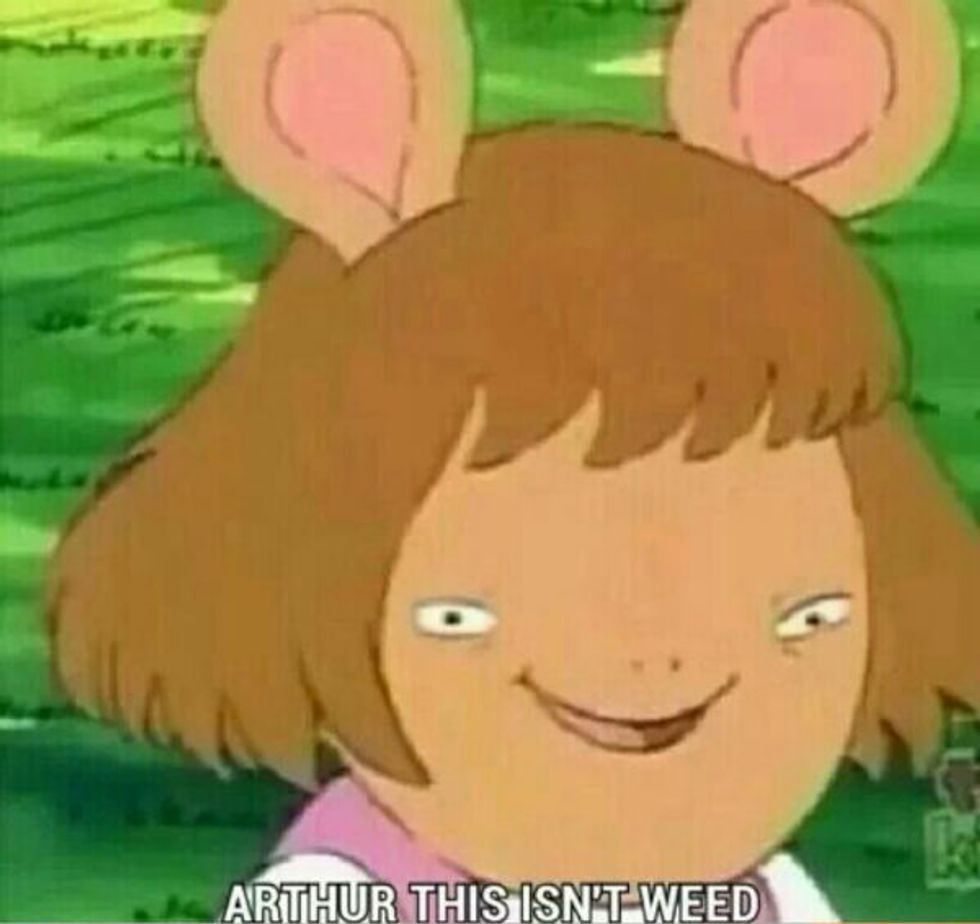 Well...except for one part -- since as we all know the Interwebs is a good dumping ground for hot garbage fires of repressed Freudian desires. And, as a result, an unfortunate offshoot dubbed by Know Your Meme as the "Arthur and DW Slash Pairing," these memes take decontextualized stills of Arthur episodes and inserts captions that hint at an incestuous relationship between Arthur and DW.

My timeline is sexualizing my childhood favorite, Arthur the aardvark, and quite frankly, I am here for it
— christine teigen (@chrissyteigen) July 28, 2016


This is why we can't have nice things.