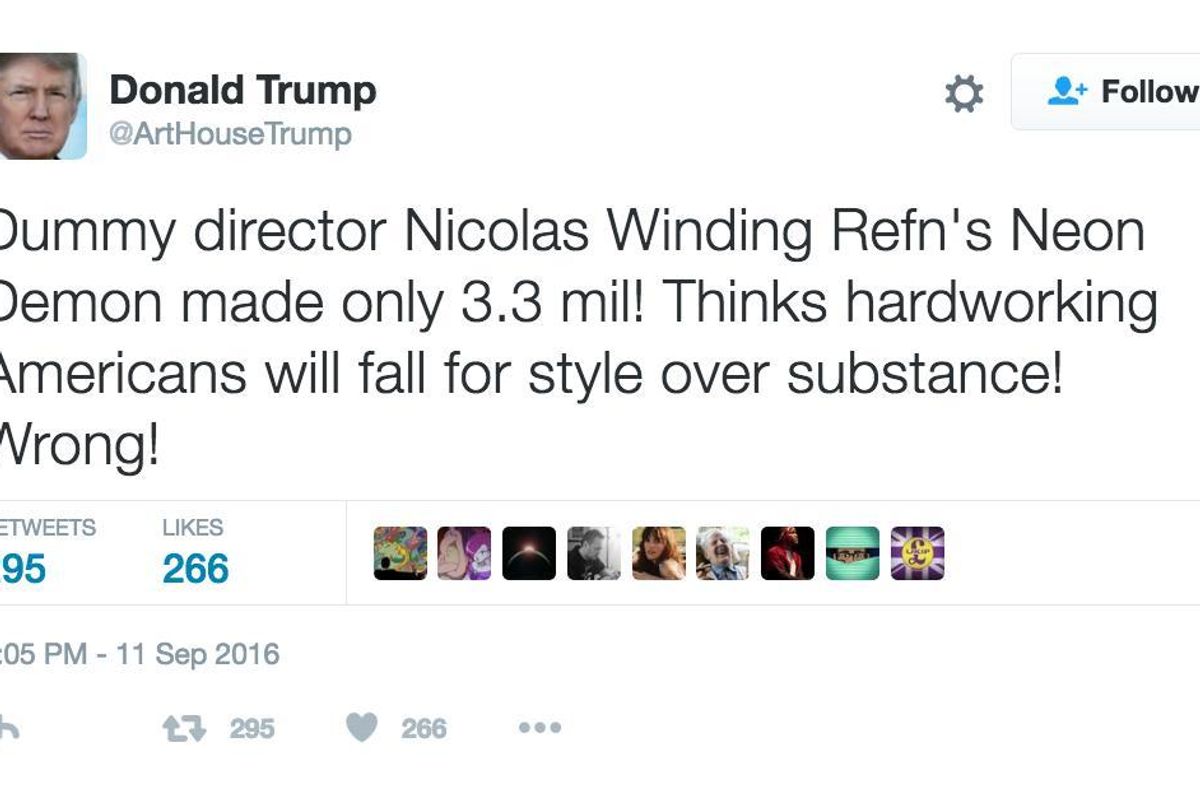 Because we probably can't rely on Matt Lauer to ask Donald Trump the tough questions (i.e. what does the presidential candidate think of this year's Cannes selections), we now have @ArtHouseTrump, which reimagines the Donald as a little less obtuse and lot more Ebert. And just like the kid you sat next to in your Italian Cinema seminar, he's got a whole host of obnoxious opinions.

Thankfully, he at least agrees that nouvelle vague is kind of garbáge...

Breathless: The editing is a total disaster! Jumps around for no reason! Godard is a mess and everybody knows it! BAD!
— Donald Trump (@ArtHouseTrump) March 25, 2016

That Kurosawa can be a little overbearing at times...

Rashomon: Kooky Kurosawa tells the same boring story over and over but keeps changing it! Dumb!
— Donald Trump (@ArtHouseTrump) September 11, 2016

Not to mention the fact that no one needs to spent 2+ hours watching Adam Driver write poetry.

Jarmusch's Paterson getting good word of mouth at TIFF, but who would want to look at Adam Driver's smug face for 113 minutes? Disgusting!
— Donald Trump (@ArtHouseTrump) September 15, 2016

And, of course, just like his IRL counterpart, @ArtHouseTrump is not afraid to sling some shittalk, taking a few of Hollywood's controversial favorites to task sans hesitation.

Haters bad mouth me but look the other way with Raping Roman! Lock Him Up! https://t.co/XVQVo4UAMH
— Donald Trump (@ArtHouseTrump) September 15, 2016

However, @ArtHouseTrump is also suspiciously a pretty big fan of revolutionary Soviet cinema...though we'll give him the benefit of the doubt and say it's probably for the Odessa steps sequence.

Then again, he also thinks that the work of infamously morose Swede Ingmar Bergman is conceptually anti-American...

As if your Criterion Collection wasn't conservative enough already. Excuse us while we watch Crossroads for the twelfth time.

Netflix's foreign film selection is pathetic! Those dummies don't know how to negotiate for the streaming rights to the best titles! Sad!
— Donald Trump (@ArtHouseTrump) September 10, 2016