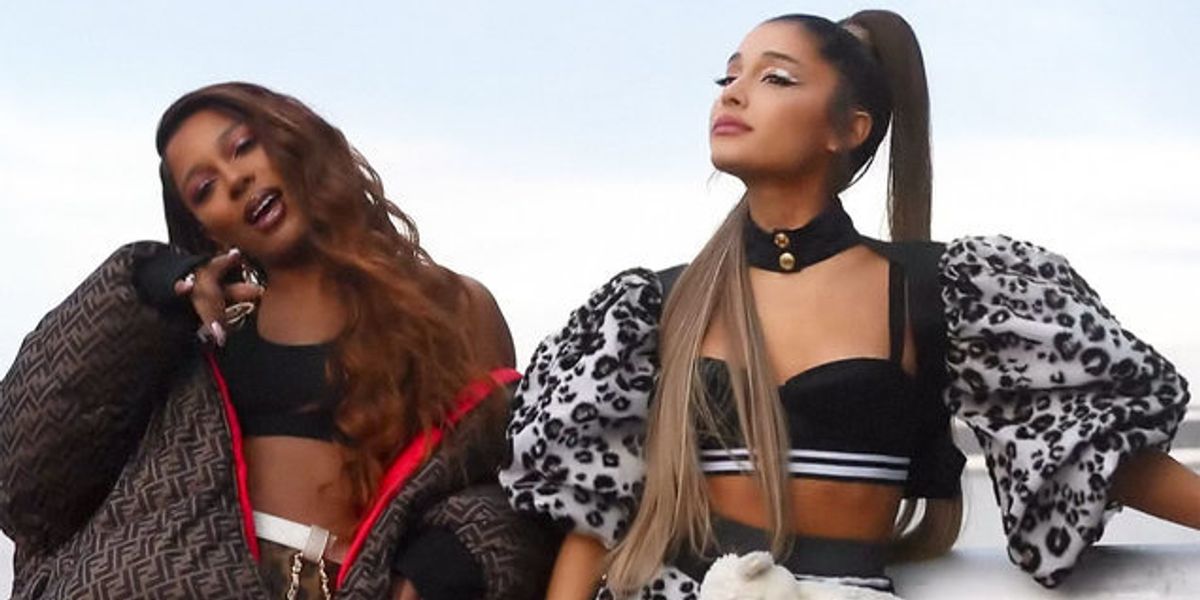 As promised, Ariana Grande delivered a new single to us this Monday, with help from best friend and 7-ringer Victoria Monét called "Monopoly." It's a slurpy, melodic trap self-love bop and an infectious inside joke between Monét and Grande, that they decided to let us in on. They teamed up with the meme cheerleader Donte Colley for the mostly camcorder-footage, blooper-reel style music video which directed by Alfredo Flores and Ricky Alvarez.

The girls dance on the roof and literally flick away "fuckery," "haters," negativity," "trump" and "bad vibes" in the style of Colley's iconic videos. In turn, they make it rain cash, credit cards and heart emojis, as well as "healing," "positivity," and "loyalty." Colley joins them in the video to for some ass-shaking choreography in "7 Rings"-graffiti printed pink jumpsuits and he even gets video-time for one of his famous routines. The girls celebrate friendship and ambition ("Outta here with that fuckery/ treat my goals like property/ collect them like monopoly"). Her vocal coach Eric Vetro, "the album they made of clicquot" (Thank U, Next) and the 90% of their "7 Rings" royalties she and Monét had to give away to Rodger and Hammerstein, also get shout-outs.

The part of the song that's making waves is the comically explicit and yet mysterious admission that Ariana seems to make that she's bisexual. "I like women and men (yeah)" she blurts to the beat in the video, while she and Monét pop out of restrooms and nod approvingly, pointing at the gender signs. Then she does a split. Oh!

The line can be taken a neat coming out, or simply a warm and fuzzy statement of universal love that Ari, who — love her, is very cheeky — is apt to make. Civil warfare rages among the sectors of her fans, half of which are popping champagne and welcoming the longtime ally into the LGBTQ community, and half of which are insisting people not jump to conclusions.

Ari isn't one to keep silent and was very aware the line would send people into a frenzy, so likely, it won't be long till she clarifies what all that bisexual lighting in the video meant.