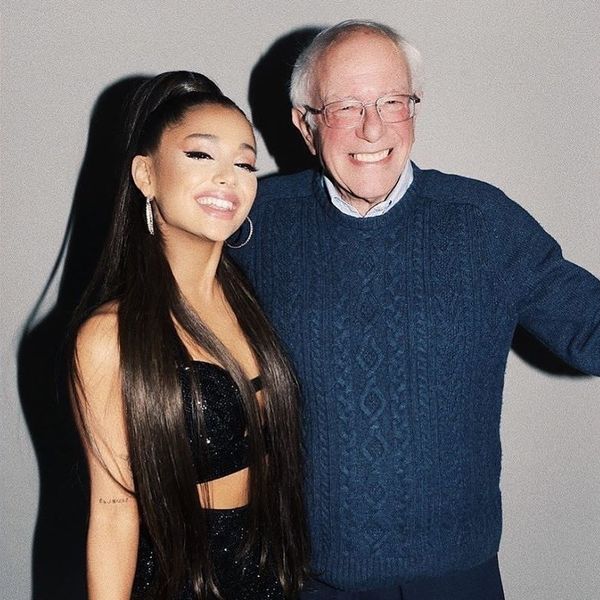 Ariana Grande is the latest hitmaker to show love for Bernie Sanders, following Cardi B — who recently visited a nail salon with the progressive Democratic candidate.

While they were both in Atlanta (Ari for the Sweetener tour and Bernie for tonight's debate), the pop star had the presidential hopeful out to her show. Ari and Bernie proceeded to fawn all over each other on Instagram afterwards.

"MY GUY" she wrote on Instagram. "Thank you Senator Sanders for coming to my show, making my whole night and for all that you stand for !!! @headcountorg and i are doing our best to make you proud. i'm so proud of my fans for paying attention and getting involved. we adore you! also... i will never smile this hard again."

In turn Bernie (who, a former musician himself, has always had taste), gushed, "I want to thank @ArianaGrande for not only being a wonderful entertainer, but also for being such an outstanding advocate for social justice," Bernie wrote. "We must all be prepared – like Ariana has shown – to fight for everyone who is struggling. It was great to meet her in Atlanta last night."

So, does this mean Ari's feeling the Bern? While opening her note to Bernie with "MY GUY," and revealing she "adores" the Vermont senator sound a lot like an endorsement, we can't say for sure. She was a Hillary Clinton gal last time around, but hey, times change.

Issues like LGBTQ protections and gun violence are close to the singer's heart, and she definitely wants all her fans to vote, whoever it's for. She's partnered with voter rights org Headcount to stock each stop on her 80-date Sweetener tour with "#ThankUNextGen" voter registration booths.

Whether she's teasing an endorsement or merely trying to make the election seem glamorous, it's a huge win for the Bernie camp. Warren's team is furious right now.