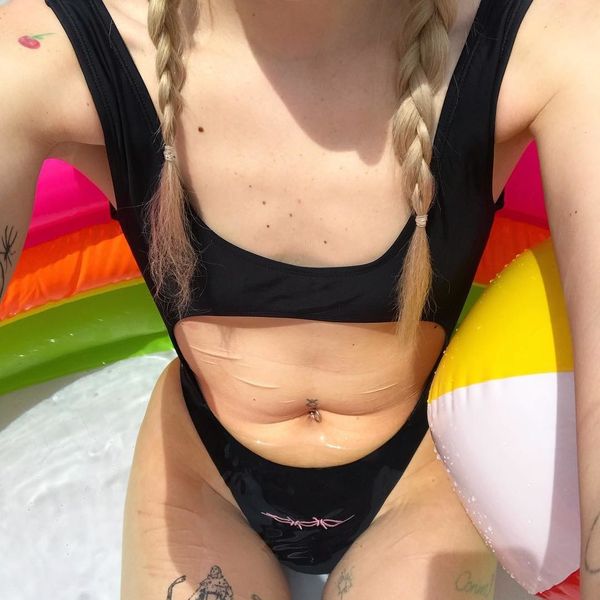 As we watch one taboo after another come crumbling down in fashion and modeling, one of the last remaining stigmas is the self-harm scar. Given that emotional pain is something mainstream culture still struggle to talk about openly and without shame, it sadly makes sense that self-harm scars — visual reminders of internal anguish — have long been expected to be hidden from view. Now, however, a few fashion brands are making the move to reduce stigma and fear by featuring models with visible self-harm scars in their campaigns.

True to its stated mission of "shunning the world of mainstream fashion," online indie fashion retailer Goodbye Bread recently cast model Amie Cocoshka in a swimsuit campaign that drew immediate attention due to her very visible scars on her legs and torso:

Commenters quickly weighed in, with many thanking the model and the brand for showing an image in which they finally saw themselves. "As a person that has scars from self-harm I fucking love this photo !!!!!!" one wrote, while another added, "I'm telling you that representation helps spread awareness. If they were honestly just trying to advertise a swimsuit then they would blur out the scars like they do for so many other models with scars and blemishes and cellulite. They are showing her for who she is; a human."

Still others feared the glamorization of a very serious issue, as one commenter wrote: [sic] "I'll never be proud of my scars because i don't like romanticizing mental illness and i'm not proud of what i did to my body but ill own up to it. Hurting yourself is a sad reality but its becoming a mainstream fad for some fucken reason."

Goodbye Bread on Instagram: “The Heat is ON 🔥 20% OFF SITEWIDE 🥤👉 Goodbyebread.com”

In response to the wave of comments, Amie wrote her own:

"Oh wow fuck me it sucks that it's 2018 and we still have to deal with stigma around scars online or out in the world. Anyway if you're on social media and you talk ignorant shit, you're so boring, you'll never see me doing that. Never feel shameful about having cut yourself, don't let your scars hold you back by shame guilt or fear. Shame and guilt are both bizarre emotions that make you feel bad about things that you've done. So fuck all that. Light and love and all that goody good shit."

Since then, Goodbye Bread has posted another model with obvious scars, prompting more debate in the comments over whether the posts are needed representation of an existing issue, or turning self-harm into a desirable trend:

Commenters were similarly split on these posts, and like Amie, Dani responded to the backlash, writing in a statement:

"This is me, my scars are my story. I understand the trigger warning because if I was in crisis and saw these scars, I'd be severely triggered, but I just want anyone struggling to look at this image and remember, if you have scars, it's okay to accept them as part of who you are. I don't want to glamorize self-harm by being open and non-censored with it, but instead, tell victims not to be ashamed of their scars."

Helen Morris, one of the founders of Lonely, told Refinery29 in a statement, "We think it is important to represent women as they are. We don't Photoshop and we don't shy away from sometimes uncomfortable conversations."

Given how rare photos like these are, presenting them in a fashion campaign without context is likely to shock and trigger some, as they can be easily interpreted as glorifying a painful experience many young women (and men) share. However, stigmatizing mental illness doesn't do much good either, and representation of this kind is as good a place as any to start unpacking our baggage.