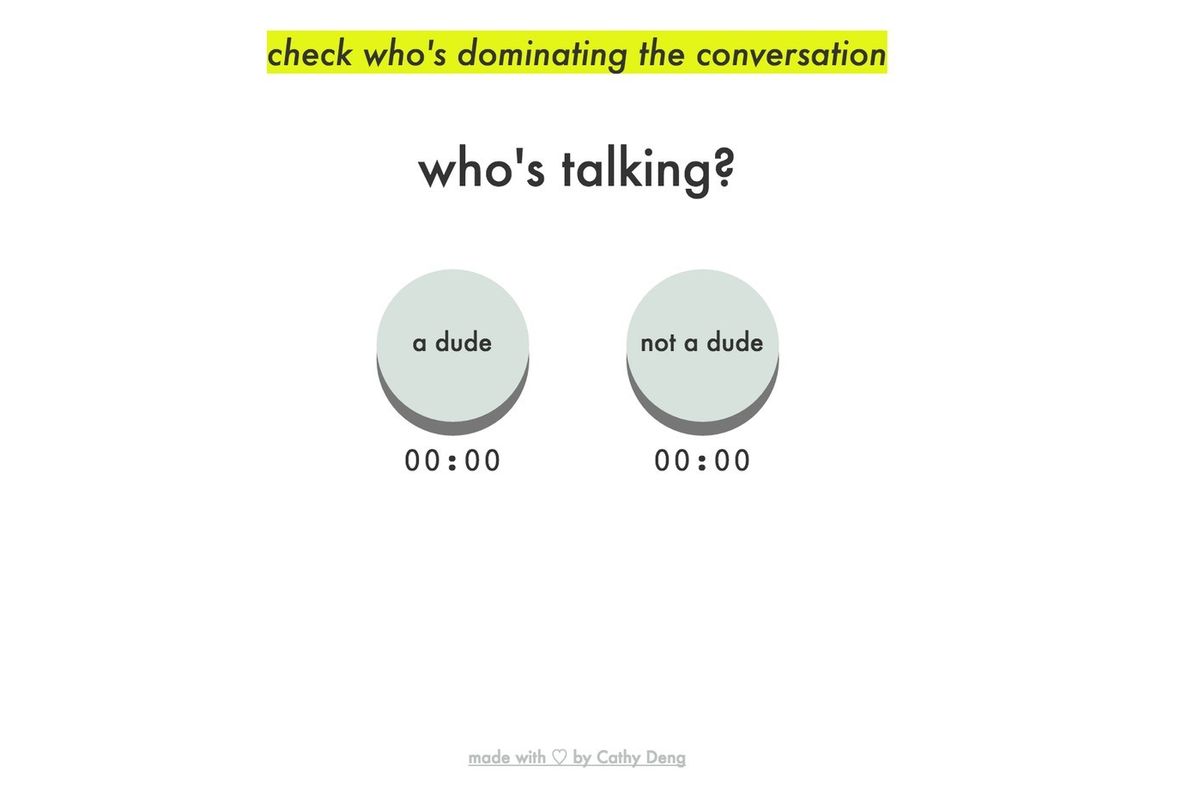 Meet The Creator Of Your New Favorite Website, "Are Men Talking Too Much?"

While a button that automatically shuts up the "well actually" crowd may still be a few years in the works, we still have a halfway-there alternative thanks to a brilliant new website called Are Men Talking Too Much?.

Created by Chicago-based developer Cathy Deng, the premise of the site is simple -- click one button for when "a dude" is talking, click another for when "not a dude" is talking, and it will show who exactly is dominating the conversation via a timer. It's also mobile-friendly, so feel free to use this as an excuse to whip out your phone mid-meeting to let your annoying co-worker know you're not happy being interrupted. Brilliant, right? As such, we spoke to Deng about the site's development and how the best way to shut down trolls is to give them straight facts, as well as what else we can do to enact bigger change, one small step at a time.

How'd you come up with the idea? Why create this?

I wanted to build something that would help people pay attention to disproportionality [when it comes to gender], and hopefully start some conversations.

I think technologists often like to think about complexity -- heavy-duty apps with a lot of features, complex data models, etc. But as a builder, I have the opposite tendencies -- I think a lot about the most clear and useful thing I could build with the least possible work.

How did your time in the tech industry spur the creation of this app?

Well, this general problem of men not being as conscious of the time, space and attention they take up as women is something I have been noticing for a long time, especially since I've mostly inhabited male-dominated STEM spaces in school and work.

What really pushed me to build this was attending a tech meet-up that people celebrate as being inclusive, and yet, event after event, I saw men [acting] as the primary participants. Whenever I pointed these types of things out to men (e.g. "Did you notice that only men were asking questions?") they'd react with surprise, because they're just not as attuned to these things. I saw an opportunity here. I felt that well-intentioned men who care about inclusion were mostly paying attention to things like the makeup of rooms, panels and events [in terms of diversity] (I call this "counting bodies") and weren't paying nearly as much attention to patterns of participation and how people interact.

What about POC? Do you think you'll ever develop a similar type of application for WOC, who tend to be even more disadvantaged when it comes to workplace culture, representation, pay, etc.?

The thing with this particular timer idea is that it requires the person using it to make assumptions about other peoples' identities. I decided that determining whether someone is "a dude" versus "not a dude" was pretty innocuous and straightforward, but it'd be hairier to assume someone's race and ethnicity. However, I'd love for people to come up with more clever ideas that I haven't thought of -- say, a tool that involves self-reporting identity and some anecdote that's meaningful.

Do you think the tech industry is currently doing enough to encourage "diversity" — whether that come in the form of underrepresented genders, sexualities or races?

In general, no. I think people are talking a lot about diversity, but it's also very easy to get into a situation where companies are incentivized to *look* like they are addressing diversity with flashy events and initiatives, and then do nothing behind the scenes. I also see some tokenizing going on, where certain individuals and organizations are consistently held up as examples of diversity in tech. And I feel conflicted about this because on one hand I think it's great to elevate individuals who are not the typical "Silicon Valley white dude in a hoodie," but on the other hand, it's dangerous to have a small handful of people as the go-to "woman in tech" or "black person in tech."

What steps do you think the industry could take to improve "diversity"?

Well, actually hiring underrepresented minorities is a pretty straightforward first step. I think it's pretty common knowledge that existing hiring processes are very noisy and imperfect methods for identifying whether someone is going to be a good employee. A concrete example is that coding challenges for engineering interviews are bullshit -- mostly an intellectual circle jerk. So, given that's the case, people should really be reconsidering the ways that their interview processes are exclusionary. Why hold on to hiring processes that probably aren't that great at identifying talent and potential anyway?

Another thing is to reframe the focus on "diversity" -- which gives me vibes of like, serving people on a platter -- and focus more on "inclusion," which is more about creating spaces that minorities even want to be a part of. On the topic of inclusion, I'd love to see more awareness of all the small ways that people can shut others out without even intending to. For example, when men are too quick to blurt out their thoughts, or when people look to men for answers to questions in a meeting -- these are the kinds of things I was trying to get at with the website.

Anyways, I have a thousand other thoughts on this, but don't want to ramble or claim to have all the answers to improving diversity, since I still come from a place of privilege in many ways.

What kind of feedback have you been getting?

The feedback has been overwhelmingly positive! I've heard from so many women who are thankful this exists, and are looking forward to using this. I feel like I've tapped into a giant existing need.

I was expecting way more hatred and vitriol for being a woman behind a public thing on the internet, but remarkably, the trolls have been few and far between. A few internet dudes have gone on rants sharing non-constructive feedback, which would normally be annoying, but in this particular case, it's funny that they don't see the irony.

I think I've actually found a great way to talk about gender without trolls getting in the way, because the website isn't making any statements that people can object to; it's merely posing a question and inviting people to be more observant.

Some people may resist being told about biases that exist in the world. If I, say, wrote a blog post complaining about gender bias in the workplace, I probably would have received way more negativity -- but it's powerful to find ways to show people.

What's next for the app?

Probably nothing - I'll continue to accept contributions if they make sense.

I think technology is very commonly framed as direct solutions to problems, for example, if you are hungry and also lazy, you can order some delivery on a food app without leaving your couch. However, I see a lot of potential for technology that acts in more subtle, indirect ways -- technology as a form of communication, as provocation, or as art. I'd love to see more people think creatively about building things along these lines.

Visit the site here and remember to bookmark.