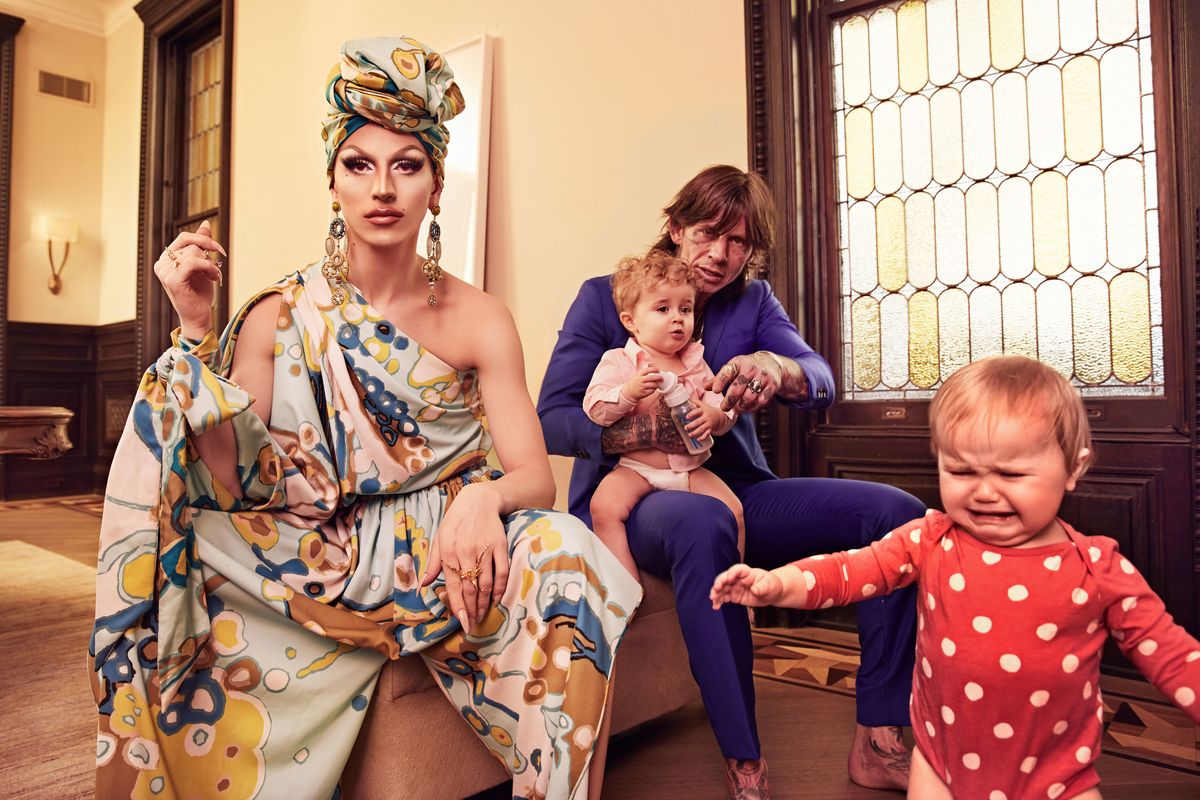 No queen's arrival into the workroom on RuPaul's Drag Race was more fated than Aquaria's. At 21 years old, the New York City performer had already amassed a gargantuan online fan base — over 100,000 followers on Instagram before her time on the show. So when Aquaria disappeared from social media last fall, it was clear the prophecy had been fulfilled. Gentlemen start your engines, blah blah blah.

RuPaul's Drag Race is all about transforming drag queens — for decades relegated to being underpaid, underappreciated underground icons — into celebrities, so what happens when a contestant is already a celebrity? Aquaria, first of her name, is forging that path alone. "It made my stakes a lot higher," says Aquaria, who now at 22, is not only an internationally famous drag queen but also a budding reality TV star as a contestant on Drag Race Season 10. And if there's one thing that unites all reality TV, it's drama. "I don't think that there was anyone particularly trying to beat me... but I'm sure there were a couple of girls who were like, 'Alright, let's knock this bitch out.'"

The reality of reality TV is that, while Drag Race may be searching for America's Next Drag Superstar, it's also searching for America's Next Iconic Catfight. So while the 14 queens are running on fumes and spending eight hours in high heels, they're also being followed by cameras hoping to catch a future meme being born. Is being a Drag Race queen something like being a Real Housewife? Maybe in terms of makeup, padding and strategic lighting, but there is one major difference. "I wish I could say I was like one of the Real Housewives," sighs Aquaria, "but unfortunately the most I'm [potentially] getting out of this experience is $100K."

PAPER transformed Aquaria into the Unreal Housewife of New York, and talked all about the realness of reality TV.

On Aquaria: Dress by Cheng, Belt by Zana Bayne, Earring by Area, Rings by Jade Chiu. On Dutch: Pants by Ralph Lauren, Pendant by Jade Chiu

Drag Race isn't just a drag competition, it's also a reality TV show. And you've been vocal on social media about how some of your sound bites are homages to classic moments to reality TV. Is reality TV something that inspires you, and how does it feel to now be a reality TV star?

Growing up, my parents really monitored the TV, so a lot of the crazy reality shows on MTV and VH1, I didn't get to really watch. I would run down to the basement late at night and watch them, so for me there's that. But also my family's hanging around time would always be watching American Idol or The Amazing Race. So for me, I just always had reality TV in my life. I've never been the person who always watched television and said, "That should be me." But, then I did later in life, because Drag Race happens to be a reality show, and I did say that that should be me. While I never was like, "Let me be a reality TV star," but it's definitely been a large part of my entertainment viewing growing up. So not just being a popular drag queen, but being a reality TV star, is a little wild. I definitely went into the competition with a very strong and positive mindset, and I knew what I could expect to an extent, and how to behave myself. But you know, when questions keep getting asked between the interview and on set with one person or another group of girls, you kind of lose sense and the reality TV [aspect] really takes [hold]. You realize that in the back of your mind you think that the cameras are always rolling, so it's an interesting view of yourself.

Were there ever moments where the competition aspect of the show receded into the background, and you felt aware of the fact that there were cameras constantly following you, waiting for drama to happen?

I was aware that there were cameras on me at all times, and I think that's why, in my mind, I wanted to always try to say the right things. Not to be fake, but just to not regret what I say in the future, specifically with the Miz Cracker situation in the beginning of episode 2. There was a reason why I was trying to do what other people perceived as backpedaling or downplaying, because I wanted to speak to her later when we were out of drag — with the cameras still on, but to have more of a conversation. We've been in drag for eight hours, our feet kill, we want to eat and go to sleep. I wanted to have a regular conversation with her, so yeah, there's times where I've been aware that the cameras were on. I just tried to maintain composure as much as possible.

Obviously, there is this whole situation with you and Miz Cracker. Part of that comes with your shared history, but also part of it is the nature of reality TV and creating drama. Do you think that Drag Race does a good job of presenting an accurate view the sisterhood of drag?

Yeah, depending on how the cast is acting. I can speak for what I've seen myself so far, and pretty much everything I remember doing there has been presented pretty accurately. Drag queens are happy, sad, and mad. It's a reality TV show, so the cameras are going to focus on the most dramatic of those emotions. But, as far as everything that's played out so far this season, they've done a really good job of honing in on where the buzzy drama is, the moments of true happiness, and the moments of sisterly dramedy. With Asia always nagging at Monet about her sponge dress and shit. It shows that we can be critical of our sisters, but it can also be in a playful way and not as angry.

Who were the girls that you really bonded with?

On the show, going in I was a good friend with Monet and to be quite honest, fairly friendly with Miz Cracker, as well. So they were the two New York girls that I knew that I was very close with. Yuhua, Dusty, we've done so many shows together in New York. The New York girls were all pretty sisterly. And then I don't think I made too many friends the first day because I was the last person to walk into the Work Room, which meant that I didn't get to meet anyone. I had the least amount of time to sit at my work station, so I didn't really make any friends that day, except for Vanessa Vanjie — Miss Vanjie — who I was sharing a workstation with. And then, on episode 2, that's when I think I started to see more friends, because after the mini challenge, I was the first queen to be picked to go on one of the two teams and Asia O'Hara picked me and she let me know why and all of the reasons she picked me. And I really respected her for that, and we got along really well for the rest of our stay there.

What is it like to watch yourself on TV?

Right now, with a lot of the drama I'm having, I've known that it happens for the past 9 months. So, there's a little bit of cringe sometimes. A lot of my humor and mannerisms don't read as well on television as I imagined them. I'm watching it through my lens, but I'm also watching it through the fan's lens, and a regular viewer's lens, so I guess I'm a little critical of myself. But I think I'm that way in everything that I do, so there's no surprise that Drag Race is giving me the same vibes.

What's your favorite meme of yourself?

There's so many wonderful ones to choose from, how could I possibly choose? I really never liked the "I don't define drag" one, because it just seemed too dumb for me. It didn't seem funny, it just seemed like I said something totally backwards sounding. So that one didn't really make me LOL, but I love "Vixen, shut the f**k up." That's a classic.

A big part of your drag identity is being a fashion queen. Can you tell me a little bit about some of the designers that you work with? Who do you have your eye on, and who inspires you?

Well, for me, fashion has always been a very important part of my look because without it the queen has no clothes. But I've also not ever had a lot of access to what I would want [to wear]. I'm not somebody who totally designs things myself because I want them a specific way and I know that I won't be able to do it to my liking half of the time. I work for everything that I have, so I wouldn't always have the ability to go out and get the outfit I would want. In New York City, there are and have been a lot of fashion designers that have been very helpful and encouraging of my drag. Right when I moved to the city, my friend Wesley Berryman, who's popping off real good now. When I moved to the city I modeled some of his clothes and we really had a cute little bond, I've worn lots of his looks. And I really like the simplicity and how I can take it in my own direction. And of course, Hana Quist, she designed a couple of things for me on the show. She's just so brilliant and such a hard worker. I admire her good eye and her work ethic.

You are a fairly young drag queen, and now that the show has been on for 10 seasons, you really grew up with the show. Does being on Drag Race feel like something you've been working towards for a really long time? As a queen who gained such a huge presence before the show, was there ever a moment where you thought about figuring out a path without Drag Race?

I always just wanted to work as hard as I possibly could and try to move up the ladder just so I could have the most opportunity to make money, to fund exciting things, and to travel. So, my end goal was whatever is best for Aquaria at that moment. And while I could continue to build my brand, getting on Drag Race has definitely been something... not necessarily something that I wanted to do my whole life, but I've just always been a fan of the show and when I realized I wanted to do drag it became more apparent that I was at least decent and that I would have a good time on the show. I really liked the fun aspect of how the show came off to me. It seemed like summer camp, with all of the different challenges. I just wanted to do it for the joy of it, it seemed very enjoyable. It's something that once I realized was a possible thing to obtain, I wanted to get to that position. Because that's definitely a huge way to validate yourself in the drag world.

When is Aquaria happiest?

Aquaria's happiest when she's out with her friends, at the club, wearing a look that she's super confident in that's super exciting and cool but also genuinely her. I think that's definitely when I feel the most good vibes.