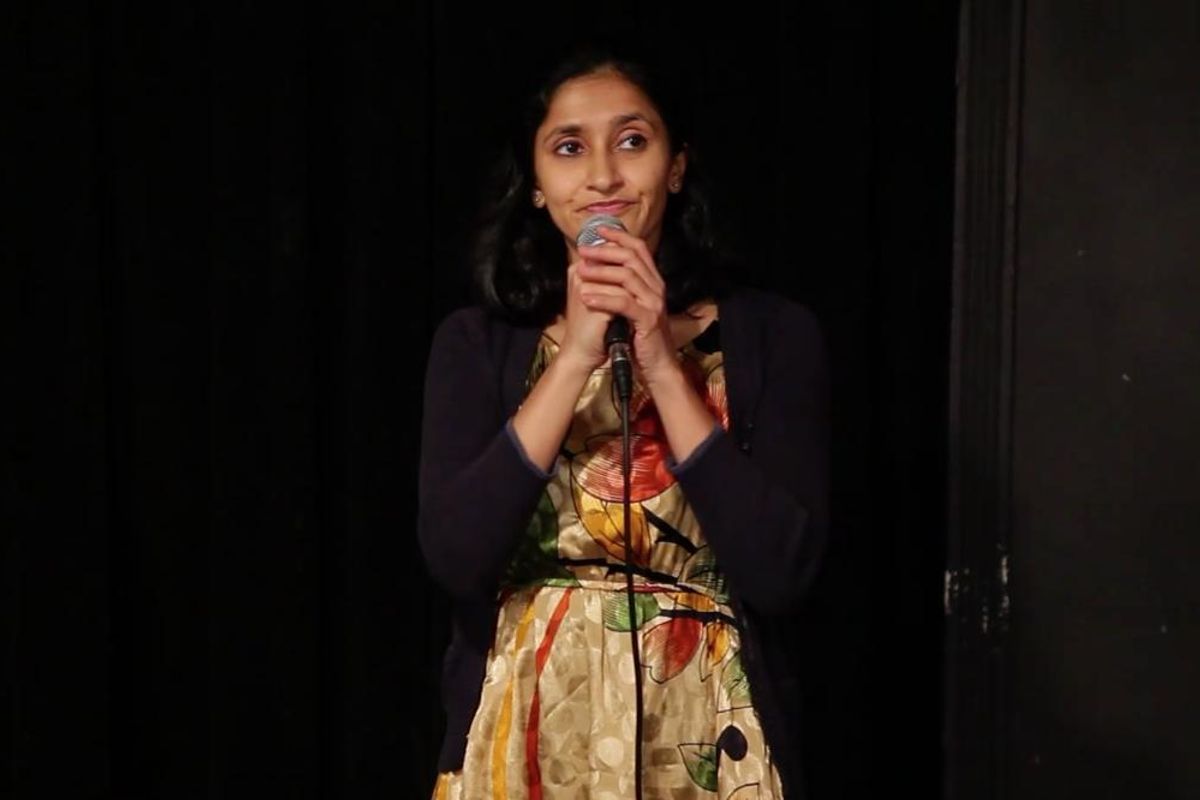 Aparna Nancherla on Twitter Humor, the Pitfalls of Modern Dating, and the Comedic Value of PowerPoint

Comedian Aparna Nancherla's Twitter feed is a reminder of the power and versatility of the medium -- 140 characters missives packed with double entendres, social commentary, and self-reflection. Her observations, like "The epi-pen of female friendship is telling another lady she ain't crazy," are articulated with a clarity and simplicity that is easy to consume, but difficult to replicate. Her humor both on and off social media is witty and deadpan, while also emotional and vulnerable, spanning observations on how Sundays feel ("Walking the plank but you are holding a frittata the whole time") to her observations on dating and being single in New York City, to her experiences with depression. In 2016, she starred in a TV comedy special, released her new album Just Putting It Out There, went on tour, and co-hosted her web series Womanhood with Jo Firestone. We sat down with her to talk about recording her first album, the fluidity of stand up, and understanding your various selves as a performer.

You've had a really busy year. Could you tell me a little bit about your writing process. Do you sit down and say, "Ok, now I'm going to write" or just whenever you have a new idea?

It's kind of a mixture. When I'm walking around and out in the world, I'm constantly aware of things and jotting down ideas, and I tweet a lot. A lot of times, it'll be a little observation and then when I make the effort to sit down and write, I'll usually write kind of free form to start out and then after that, I'll work on specific jokes that need to be fleshed out more, or I'll look at some tweets that might be potential for bigger ideas or a longer joke. It's kind of a mish-mash of different things.

How is the process different when you're collaborating, like for your web series with Jo Firestone?

A lot of times we would have a shared Google Doc, and us and the director and producer would all add ideas to it, and a lot of that one was pretty improvised. It was just us riffing back and forth. When you're collaborating, it's more that you're bouncing ideas off each other and a lot of funny stuff comes from just talking it out.

How do you think about writing on social media versus writing stand up? You mentioned that they're related in that you will revisit tweets when writing standup.

They're related, in that tweets will generate the nugget of an idea, and in a longer piece you're able to explore it more. Twitter has a very specific language to it, and there are jokes that are very Twitter-specific. Whether it's a punctuation or a spelling thing that wouldn't necessarily translate out loud, or in a longer piece it might not make sense. As you use the medium more, you learn what your comfort zone is, or what you enjoy writing, and write towards that. But a lot of it does still feel collaborative, in that you're also reading other people's tweets, and a lot of times people will make the same joke about something. Also just structure and tone--sometimes I'll see a structure someone uses and I'll be like, "Oh I should try to write a joke like that!!"

I read an interview where you were talking about the use of props, and how comedy can be more fluid than just a person on stage with a microphone. I'm curious what other mediums you have considered working into your stand up?

I like to play with PowerPoint a lot. I think it's a funny way to translate an idea. I gravitated towards it because I had done a show in New York that's a mock debate where two teams of comedians debate a funny rivalry like "cats vs. dogs" or "cake vs. pie," and each team has to present an argument. Every time I've done it, I've used a PowerPoint, and I think I realized it's a funny way to make a point on stage. Anything where you can explore a topic in a different way appeals to me. I think some people are purists about stand up, and they're like "That's kind of the beauty about it, is that's all you need." But even just to entertain myself, I like to explore different things.

You just put out your first comedy album. Did it feel different having a permanent record versus a live set?

It did. I had always been hesitant to put out an album because it did feel permanent, and I never feel like I'm done with a joke; I feel like it's constantly in need of improvement, or can be tweaked in some way, or evolves as you evolve in your life. Tig Notaro, another comedian that I really look up to, asked if I would be interested in putting out an album under a new label she was starting, and it felt like I couldn't say no to that, so that was the kick in the pants to actually do it.

I feel like a lot of comedians' first albums, and mine definitely felt like this, are a snapshot of all the stuff you've written up to the point that you record the album. It's less about one period in your life, and [instead] spans from when you're newer to where you are now. So, I think it's usually unique in that sense when you hear someone's first album, versus their second or third.

I read in an interview that you don't like it when you know a lot of people in the audience because you feel like it's another version of yourself that's on stage. I'm wondering if you still feel that way. If so, how do you talk about that self with your close friends and family?

I've learned to not be as self-conscious about it. I have realized that we do have different selves for different parts of our lives anyway, like you might be different around your family than your friends, and then you might be different around different groups of friends. [It doesn't mean that] you're being fake or superficial, just that you slightly adapt to the people you're around. I've categorized stand up and performing as another self I can inhabit and I don't worry as much that people will be like, "Oh, that's not what she's really like" or something. It doesn't feel like an [act], it's just like, "Oh this is just a different way that I can be, and that I found works for being up here."

I like your standup bits when you talk about online dating. A couple of my friends somehow managed to find their soulmates within two or three dates on Tinder, but I always feel so alienated from the guys I match. They're always like, "Looking for a partner in crime to explore Bushwick with!" And it just sounds like they're really excited to gentrify or something. Do you have hope for online dating apps?

I feel like it is a crapshoot. It's weird, in that the terms of dating, with apps and social media, have changed in terms of how much you can find out about someone, or how you can be flakier about making plans. There are so many more factors that you have to contend with. People think they have so many choices and they're not willing to commit to anything or anyone. So in that sense, it feels a bit daunting, but I think at the end of the day, the things that have worked before work now. If you do connect with a person, it transcends that culture and you still know pretty soon when you meet someone whether they're going to be a good fit for you. I think it does feel like you have to wade through a lot of not-great experiences to get to a good one, but I tend to be an optimist and want to retain my optimism, even if it is coded in a lot of cynicism.

You wrote recently about the need for compassion in the face of Trump's bigotry. I'm curious how you think we should all start doing that, and what you're hoping to see from America. It could be small daily things or large structural changes.

I think part of it does feel like day-to-day acts of kindness [are important]. In terms of the bigger picture, things are very much in flux right now, and I feel like there are two polarized parts of the country. We have seen that hate crimes have spiked since Trump got elected, but someone was telling me the other day, "Yeah, but even if Hillary had won, the same thing probably would have happened." And I was like, "Oh yeah, that's a good point." We've sort of come to a head on things that I don't think would have been resolved even if she had won. Not that that shouldn't have happened--that would still be preferable, but I do think there are issues that are going to take a long time to disentangle. And it feels like it has to start very locally, in your own community but also in local government instead of just hoping [change] will trickle down from the top, because I think we've found that doesn't work.