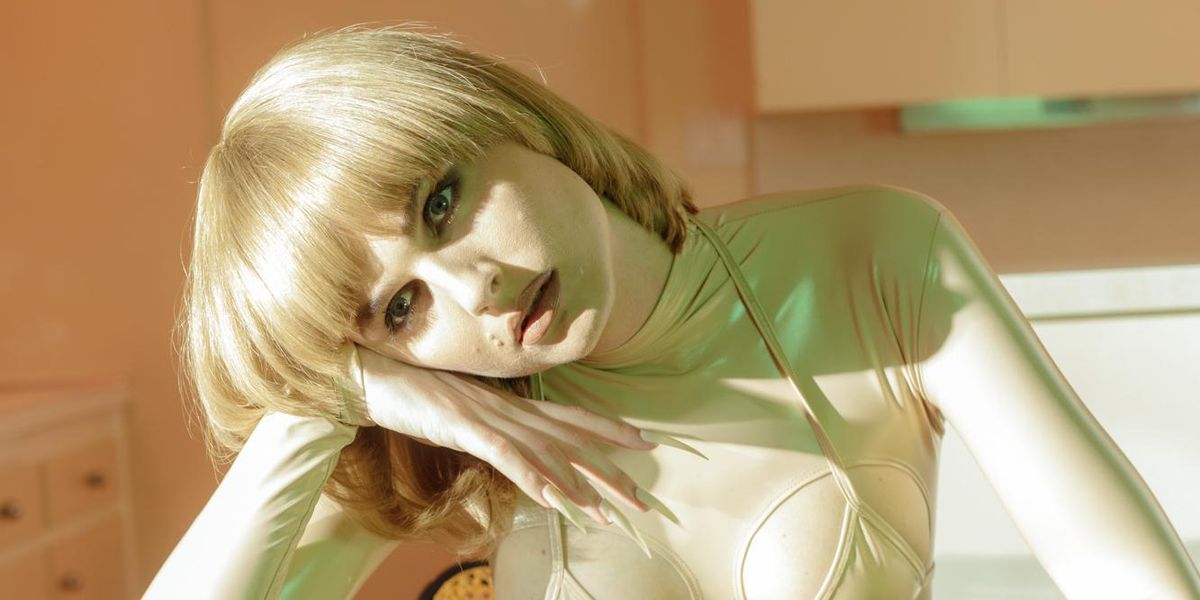 Harry Hains' family is keeping the legacy of their late son alive with ANTIBOY, the American Horror Story actor's musical project that puts forth a "genderless transhuman" in order to encourage dialogue around sexuality, gender, race and self-expression. "ANTIBOY represents the idea that most things that we are taught to believe are an illusion," said Harry, who died at age 27 in January. "ANTIBOY is a place of true equality."

ANTIBOY's newest single, "Dream," arrives today ahead of the project's full-length album, A Glitch In Paradise, out December 4 on Harry's birthday.

For its music video, Director Charlotte Rutherford worked with Harry's brother, Sam Hains, to create a utopia-like world that switches between actual, everyday moments with surreal, CGI scenes. "I wanted to make a queer celebration of sorts, combining dream and reality," Rutherford tells PAPER. "I really wanted to build a diverse cast and team of people from all different shapes, colors and identities."

Supermodel Andreja Pejić notably stars in the "Dream" visual, which presents her in two stunning environments: An unusually stark, suburban home and outside at night with bright, technicolor makeup. She's joined by a full cast that includes queer artists like Chester Lockhart, all performing for the camera in scenes that blur the line between what's real and fake.

"My character is a trapped soul dreaming of freedom, but later she transforms into a grungy glitter-faced rock star who doesn't care and lets it all go," Pejić says of her role. "I had so much fun on the set."

A Glitch In Paradise, which will include previously released singles "Paradise" and "Bang Bang," holds special significance for Harry's mother, Jane Badler, who's working to ensure her son's message can reach as many people as possible.

"Harry's message of inclusiveness, of accepting yourself and others as they are, and living without societal labels is so important at this time in our culture," Badler says. "There are so many forces in this world that can make someone feel like an outsider and I want to be able to speak to anyone that loves someone that is struggling with not fitting into the norm."

Watch the PAPER premiere of ANTIBOY's "Dream" music video and hear more from Harry's brother, Sam, on creating 3D work inspired by a world in disarray, below.

What was the inspiration behind the animation in the "Dream" video?

My understanding of the ANTIBOY concept is inspired by Harry's work directly, in particular the unreleased TV pilot A Glitch In Paradise that he wrote with Mike Zunic and the Young Folks interview he did in 2018. The last two videos we did for ANTIBOY — "Paradise" and "Bang Bang" — we had imagined the ANTIBOY as an individual cyborg, moving through different dimensions and realities. However, what surprised me about [Charlotte Rutherford's] interpretation was this idea that the ANTIBOY had become like a team, or a product line of beautiful, eccentric super hero robots. We wanted to use animation and CGI to communicate this idea that each of these performers are cyborgs, existing in multiple worlds and realities at once. We were trying to keep building on this idea of the ANTIBOY world which is a kind of futuristic, immersive, aesthetic experience. This layering of augmented and hyper realities is something that is already very familiar to us as humans in a digital world. We are already cyborgs. I wanted to create an ambiguity about what is real in the film. Are they fantasies? Are they simulations? Is this a dream?

Growing up with Harry, you both bonded over video games and the escapism of playing in alternate universes. What does it mean for you to now be a part of ANTIBOY by creating a 3D utopia that you created yourself for A Glitch In Paradise?

Harry and I were always creating worlds and we spoke of collaboration in the future. At some point, without discussion, we began working with similar concepts: Virtual worlds, avatars, simulations. We both loved anime and video games and science fiction — mediums that involve a kind of formal world building. I think we were both very fascinated with the power of the imagination to create worlds, like DIY realities. I love the idea of bringing fantasy into the everyday as a way of re-enchanting the world and liberating ourselves from the mundane and the oppressive.

Working with his material now is very powerful for me. People have said to me many times that there is "so much Harry in this," in the work that I have been doing. If that is true, it is happening in an unconscious way for me. I don't have much of a choice about what kinds of ideas I have and don't, I just trust the process and I never know what will happen. We are brothers, so I think we are just deeply connected. When I am working with his material, sometimes I enter this strange trance state and I feel as if I am channeling him. When I return, there is some some new magic there. I have a strong sense that he is still with me. Perhaps, he ascended and is now running the simulation OS now.

Both Harry and yourself always found a commonality over work and how your endeavors related to a dream world falling apart. Why do you believe other worlds in demise had such an effect on you both?

I think that the glitching dream world feels like a good description for how I experience reality and I think Harry felt the same way. Perhaps we were both kind of existentially aliened in a similar way, like we both had this innate conviction that there was something false or broken about "reality." Also, when a world is falling apart, you can begin to see the seams or get a glimpse behind the curtain. I think that is interesting, too.

How has this project challenged you artistically?

I'm still fairly new to working as a 3D artist and animator, so every project I feel like I am exponentially growing and changing. I hadn't done VFX for live action film before, and I was excited by the challenge of incorporating what I had been doing with the world building and graphics for ANTIBOY into a context with performers. I was lucky to have an experienced collaborator in Simon Villaret, who had cool ideas and helped me get going quickly.

I had previously worked in theater as a projection designer and animator, and somehow there were a lot of similarities with this process in terms of centering the expression of the performers and creating a kind of visual magic to aid immersion. For the previous videos, we were able to create everything about the world, so now that [Charlotte Rutherford] was directing, the challenge was more about how to augment the colorful dream world that she created.

A Glitch In Paradise holds a powerful message at its core about rejecting labels. What do you hope listeners take away from the album?

I think Harry suffered from trying to fit into a world, which obsessively reduces things into simplistic labels and narratives. I think the world would be a much more interesting and accepting and loving place if we held more space for people who are different. Harry was incredibly courageous about who he was. I hope that his music and his art can inspire people to be brave and unapologetic about who they are, too.

Stream "Dream" by ANTIBOY, below. Pre-save A Glitch In Paradise, here, ahead of its release on December 4.