"Anonymity is Freedom": @sosadtoday on the Internet's Urgent Sadness 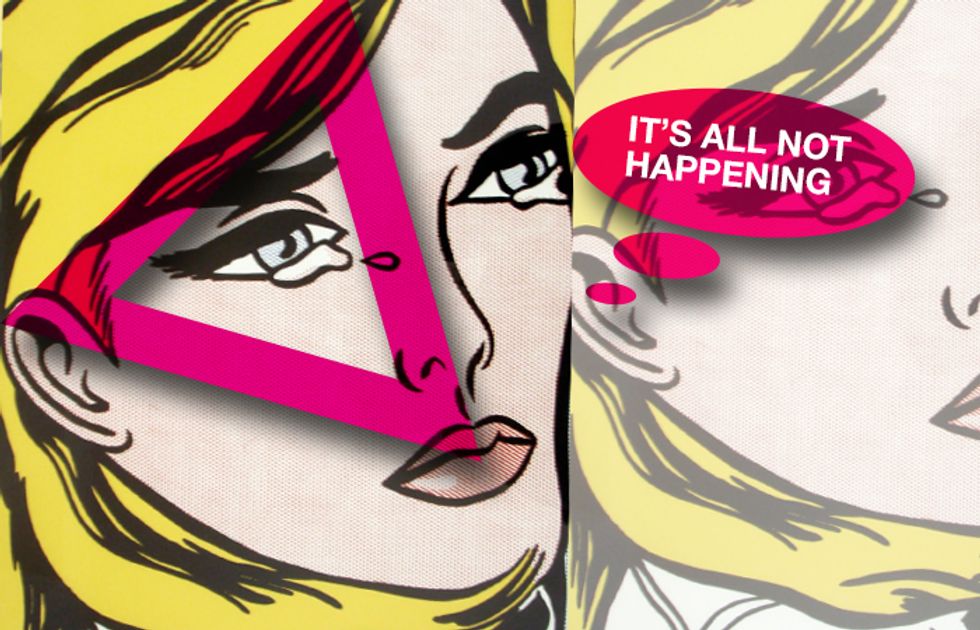 Image by Avinash Hidaramani
@sosadtoday, nÃ©e Melissa, doles out Twitter missives like "self-hatred sent you a friend request" and "just a girl staring at her phone asking you to text it" to about 150,000 followers, including Katy Perry and Riff Raff. Clearly, teen girls wistfully staring at their phones -- or at Tumblr, where Lana Del Rey's sad girl descendants reign supreme -- aren't the only ones feeling so sad today.

Everyone from artist Adam J. Kurtz, who makes "Sad Girl Fan Club" shirts, to the online shop No Fun (slogan: "Negativity is our specialty") is embracing sadness on the Internet. Even rappers: beyond Drake's sentimentality and Kanye's Twitter proclamation about his non-smiling policy, bedroom MCs like Yung Lean and Little Pain recognize that when you tweet into the void, the void tweets back. Amongst certain corners of the Internet, it seems as if we've reached peak sadness. But why, exactly, is the web filled ennui? "The Internet is good for sad people," @sosadtoday explains, "because you can be with people but still be alone at the same time." Fair enough. We chat with the anonymous sadness expert @sosadtoday about her hilariously depressing Twitter feed, the Internet's obsession with sadness and more, below.

When did you first start tweeting as So Sad Today?

Did it start out as a more personal thing?

I've always had panic disorder and general anxiety. I've had general anxiety since I was a kid -- I worried about fires, the Holocaust happening again, and anything upon which I could project my free-floating fear. The panic attacks started happening when I was a teen. I've been on anti-depressants to treat the anxiety for years, but I never realized that there was depression underneath the anxiety -- that they are the flipside of the same coin. I had never identified as depressed, despite the fact that all along there was always an ocean of sadness, disappointment, hopelessness and nothingness inside me. I think the anxiety was a coping mechanism -- that its heightened sensations, as terrifying as they are, were in some way preferable to me than the depression underneath.

In Fall of 2012 I went through a particularly harrowing cycle of panic attacks and dread that wouldn't abate for months. I was scared I wasn't going to be able to "keep it together." I am a perfectionist and am afraid that if I show any signs of weakness that I will be discarded. I didn't feel like I could function at work. I would sit there literally vibrating, and none of my usual fixes (i.e. a book called Panic Away by Barry McDonagh that I highly recommend) were working. Also, I'm a sober alcoholic/addict so I choose not to take benzodiazepines, because they are very addictive. I even went to a shaman, who was the person that first pointed out the depression under the anxiety -- not my therapist.

One day I was at my desk at work feeling like I was definitely dying. Again. I thought the words "So Sad Today." I logged into an old Twitter account I had made that Summer and never used and just started tweeting what I was feeling. I had no followers and followed, like, 10 weird tweeters I thought were cool. The rest is history.

Why do you choose to remain anonymous? Isn't the point of being sad on the Internet to get attention?

Nah, fuck fame. The point is dopamine for me and hopefully some laughter and camaraderie for others. I will probably "come out" at some point, because I'm working on some So Sad Today projects but I know that after I do it won't be as fun. Anonymity is freedom.

I have a lot of teen followers so I often tweet how I felt at 16. I am still kind of 16. Sometimes I tweet things that I think will make people laugh and make people like me. 'Cause I want to be liked. But my favorite is when real life shit crushes me and then I tweet about it and people go crazy for it. Like the other day I met this woman who was beautiful and skinny and cool and popular and not very nice to me. So I tweeted about that. And it got like over 1000 favs. And I felt vindicated. Sad but true. I am still 16.

i was born not ready

my anti-depressants are definitely the loser brand

I want to be the girl who is cooler than me

not having a penis is annoying

Why do you think everyone is so sad today?

Because reality doesn't live up to fantasy. Because living in a body is a bitch. Because it's hard to be a spiritual being having a human experience, obvi.

You told Rolling Stone that you're a big fan of rap. How do you feel about sad rap?

A$AP Ferg can be sad, Kendrick Lamar can be sad, Gucci Mane is inherently sad because #freeguccimane, UGK could be sad, Wayne used to be sad and he probably still is but doesn't show it. Danny Brown can be sad and Pac could be very sad. Chief Keef and Juicy J are, like, never sad but they make me feel powerful and untouchable.

Who is your most famous follower?

Do you think the Internet making us sadder?

It's destroying my life and I can't get enough.

Do you think the Internet tends to trivialize sadness or does it help to de-stigmatize depression?

Have you had anyone reach out to you personally with a strong (positive or negative) reaction to your Twitter?

I get a lot of emails with positive reactions. If someone needs help I share my experiences and refer them to a professional (I've had a lot of professional help). I've only really had one vocal twitter hater but he's, like, some white bruh DJ with less than 2000 followers so fuck that.

I've noticed you've been tweeting a lot of fake/sad horoscopes. What would Lana Del Rey's (gemini) horoscope be?

Who are the saddest celebrities?

I don't pay that much attention to them. Is it bad that I don't have any heros? I like Sylvia Plath tho.

What's the best way to cope with sadness?

Lastly, what type of goth are you and why?

I'm a not-enough goth. Because I'm not enough anything.