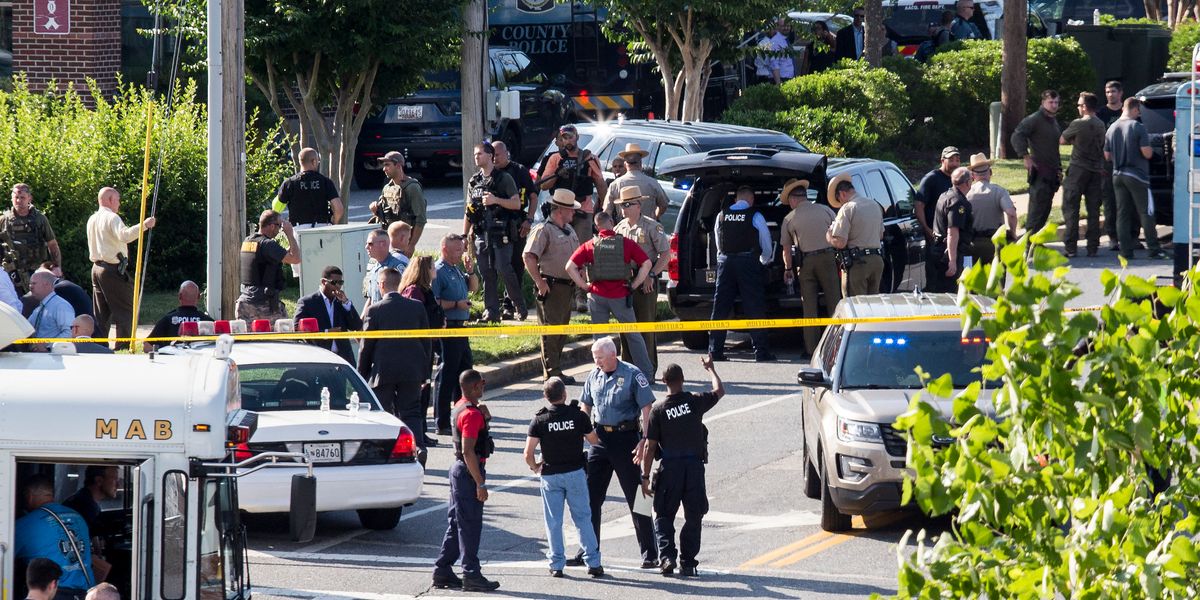 5 Killed by Gunman at Annapolis Newspaper

A gunman shot and killed five people and gravely injured several others at the Capital-Gazette newsroom in Annapolis, Maryland, according to local police. First reports of an active shooter came from news staff tweeting about the incident.

Phil Davis, a crime reporter for the paper, tweeted numerous times from inside the newsroom:

In an interview with the Baltimore Sun (which owns the Annapolis paper), Davis described what he saw, comparing his office to a "war zone."

"I'm a police reporter. I write about this stuff — not necessarily to this extent, but shootings and death — all the time," Davis said. "But as much as I'm going to try to articulate how traumatizing it is to be hiding under your desk, you don't know until you're there and you feel helpless."

Davis continued that the shooter eventually stopped firing after loading another round, though he didn't know why. This marks the 195th mass shooting in the US this year.

Annapolis police lieutenant Timothy Seipp told reporters that while they had a suspect in custody, they were searching the area for potential accomplices.


Maryland governor Larry Hogan tweeted that he was "absolutely devastated to learn of this tragedy in Annapolis."

White House spokeswoman Lindsay Walters shared a line about the Trump administration's "thoughts and prayers" to "all that are affected."

Prior to departing Wisconsin, I was briefed on the shooting at Capital Gazette in Annapolis, Maryland. My thoughts… https://t.co/DUhjdWWxBP
— Donald J. Trump (@Donald J. Trump)1530218995.0

On Twitter, many have reacted to the news with furor over Trump's consistent demonization of the press:

The shooting today in the Capital Gazette newsroom in Annapolis, Maryland cannot reasonably be separated from the P… https://t.co/vTlRryVjuI
— Lauren Duca (@Lauren Duca)1530216993.0


I don't want to jump to conclusions yet about the motive for Annapolis. Mass shootings happen literally every day i… https://t.co/6z4msyumfg
— Mary Emily O’Hara (@Mary Emily O’Hara)1530223852.0


It’s hard not to make Annapolis political when you hear Donald Trump call the media the enemy to a large audience a… https://t.co/8YteevswaP
— Tony Posnanski (@Tony Posnanski)1530220368.0

On the other side, some called conflating the two unnecessary politicization of the tragedy: