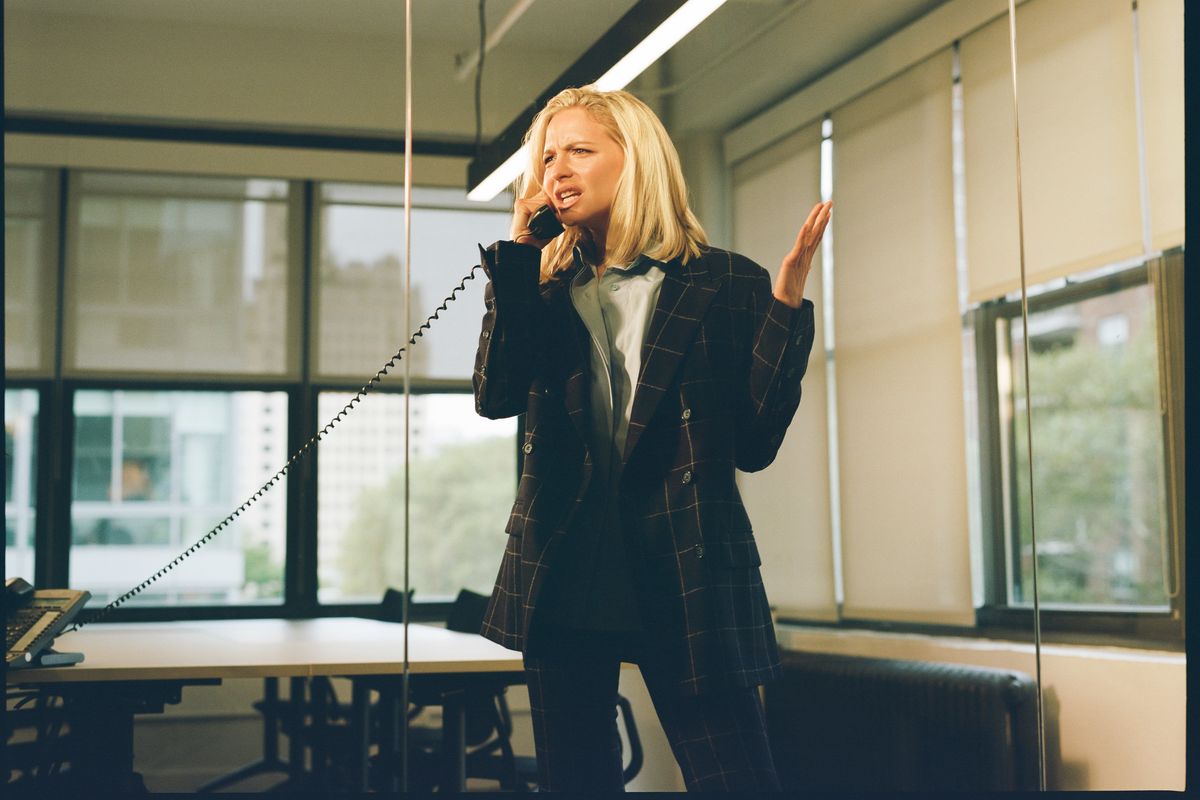 All rich people suck, but they suck in different ways. Succession makes this point in season two, when members of the show's messy, Murdoch-like Roy family meet the more refined Pierce clan during a tension-filled Long Island mansion showdown. It's Republican tabloid trash versus Democrat Mayflower descendent, but amidst the clash of cultures we figure out pretty quickly that money talks whether you read the Post or the Times over breakfast.

PAPER caught up with the actress, writer, and director to talk more about her role on HBO's cult hit (spoilers ahead).

Were you a Succession fan before being cast?

Yeah, actually. I was a really big fan of the show. I didn't watch a lot of shows last year, but I came across Succession in the fall, and I was just kind of obsessed with it. I think I binged it in like a week. At the time, I didn't really know many people who were watching it, so I really felt like I didn't have many people to talk about it with. I was really excited when I got the audition for the show, then all of a sudden this summer it felt like it just became this major thing that everyone's talking about.

What drew you to the character of Naomi?

It's always fun to play the kind of outcast/black sheep in the family. She is an outsider among her clan. She also has agency and power — she's kind of like a cool, smart, young woman who doesn't really give a fuck.

Did you feel like you had a familiarity with that world, having grown up in the New York art and music scene?

Oh, yeah. I didn't have to do a lot of research for the character, I mean I kind of like see it every day, walking through the city. I grew up here. I went to an all-girls private school, so I always felt like an outsider, and I always felt kind of different because I came from a family of artists, and we lived downtown, and that was considered very weird and strange. At my school, I remember having to take a separate school bus. It was like a small bus, it was not only for my school, it was for the other girls school across the street, because there were only like five kids who lived downtown. I think Naomi does have that creative sensibility and that sets her apart from the rest of the clan. And darkness, so that appealed to me. The darkness is always appealing.

She's also a recovering addict. How did you want to handle that?

The world of recovery isn't a foreign thing to me, I'm pretty well versed in the language of it, and have been around it a lot actually, so that was really helpful. I think that stepping into that mindset of whether you're an addict or not, I think we all are able to. I think whether it is drugs or alcohol or work or love or clothes or food, everyone I know has an addiction in some form or another. Most of the people I know are grappling with how to navigate that.

You got to work with Cherry Jones and Holly Hunter, two legends. Was it fun sharing camera time with them?

Oh, immensely. I was extremely intimidated walking onto that set, especially walking into a show mid-season with such a strong ensemble cast. There is not one weak link, everyone is so talented, and I have so much admiration and respect for everyone in the cast. Once we started working, it just felt very natural. I just felt very grateful and lucky and pinching myself every five minutes, thinking, really enjoy this and take it in because these women are legends and there is so much you can learn from them.

I think that we shot that over a two to three day period. I don't remember exactly, but I remember staring at that food for at least a couple days [laughs]. But that's what the show is so good at, you know, those kind of long, epic dinner scenes. There's three cameras shooting, and they're zooming in and out and you're never quite sure when you're on-camera or off-camera, so you're always just like in it, which is really nice. You don't really have to break character if you walk in, which I really appreciate. I remember being nervous about that little Shakespeare piece, like reciting Shakespeare at the table next to Brian Cox.

I remember asking Cherry and Holly, 'Do you get nervous?' and they were like, 'Yeah, of course.' Nerves are kind of half of the fun, nerves are great. As long as it doesn't become tension, you definitely want the nerve.

Top, blazer and pants: Each x Other

The Pierce family was a cool addition to the show because the tension between these two types of wealthy people is really interesting. Is there a lesser evil?

Yeah, I think that's why the show is such a sign of our times. It's asking the question, are there good rich people and bad rich people? And the extremes of the right versus the left. Are they just two sides of the same coin? You have the Pierces, it's that elitist mentality, because they feel that they have higher values and ideals than the other family. But I mean, they might study maps and Nan might be a feminist, but at the end of the day everybody wants the same thing. In my opinion, I appreciate people who don't try to hide what they are, who just own it. They don't pretend to be something they're not. I respect that.

"I was extremely intimidated walking onto that set, especially walking into a show mid-season with such a strong ensemble cast."

Real talk, who do you think should be the CEO of Waystar Royco?

Well, I'm not gonna spoil anything, but I think Tom might be my favorite character. I really have never seen that character on screen before. It's a very original, unique take. Matthew Macfadyen couldn't be further from this person, so to watch him step into that at work, it's really exciting and fun to watch. I mean honestly, Gerri is probably the only one competent enough to be running it. I love Gerri.

Much of the show is about competitive siblings and family dynamics. Did that resonate with you?

The family is out of touch with reality because of their wealth, but I think at the end of the day, family dynamics, the core dynamics, are universal. Things could be exacerbated and magnified with wealth and things like that. My siblings and I are very close, we're very supportive of one another, but I do think there can be this competition. We're not all competing for the same thing, unlike in this family — it's more like it's inspiring, it sets a high bar. But of course, no matter how much I love my siblings, we're still siblings at the end of the day. I love them to death, but sometimes they're crazy. So big, crazy families are not foreign to me. My family is definitely big and definitely crazy. I have a lot to draw from. [Laughs].

You did collaborate with Mark Ronson on the soundtrack of your first short film, Cecile on the Phone. Any other film projects in the works?

Yes, I'm definitely continuing to write and direct my own projects. But collaborating with my siblings is a dream, it's really fun. It's a really fun experience because, unlike most of the members of my family, I'm not an expert, I'm not a master musician. It's really funny to collaborate when we bring such different things to the table. We're coming from such different angles that it actually works, we come together in a harmonious way, it's so rewarding.

As an actress Succession is your second HBO role, after appearing on The Deuce. If you could have a spot on any other HBO show, past or present, what would it be?