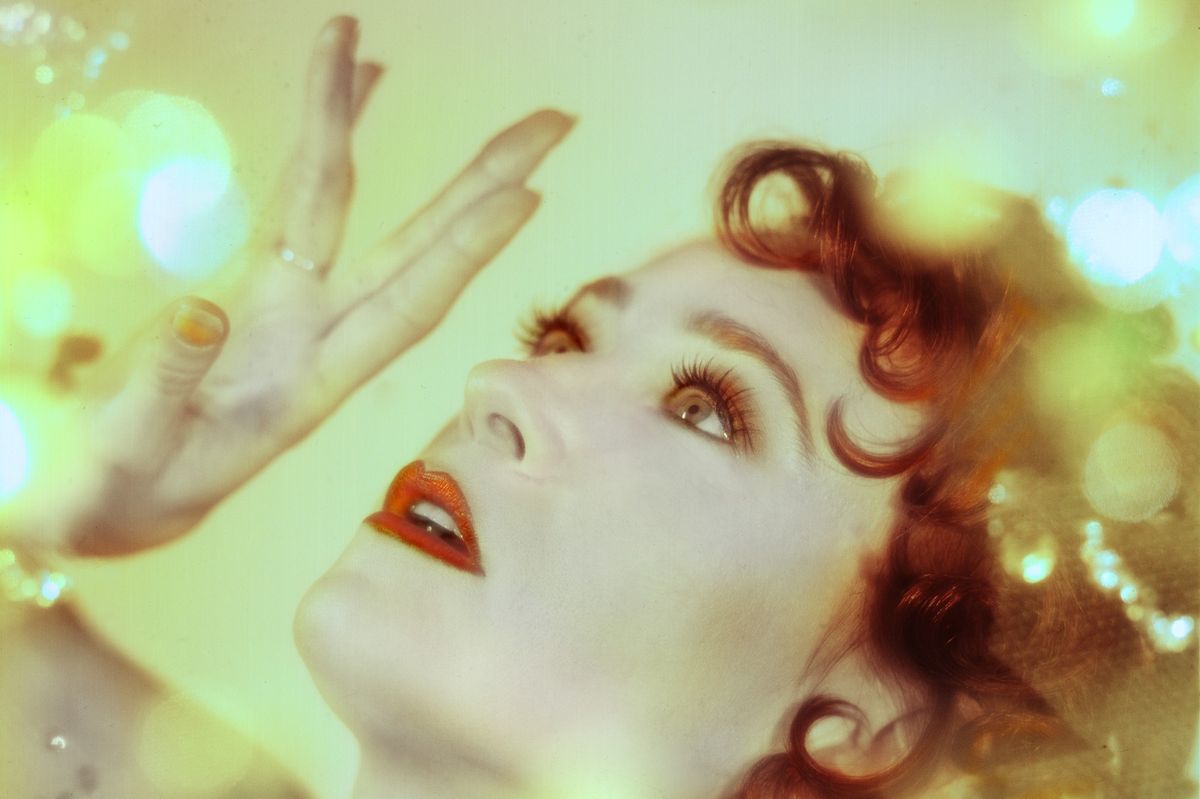 "It Girl" does not get close to describing Ann Magnuson's status and impact on the downtown art scene in its late 70s-early 80s hey day. Goddess gets a lot closer. Svelte in shape and mind, Magnuson's organizational skills, manic energy and prolific output attracted a galaxy of downtown creative superstars to Club 57, the St. Mark's Place room where she held court with the likes of Keith Haring, Kenny Scharf, Klaus Nomi, John Sex, Fred Brathwaite, Afrika Bambaataa et al., and produced a steady stream of events, parties and shows that both skewered and celebrated pop's collective unconscious. Empowered by punk's anything goes sensibility, she took her theater training and created an environment for meshugas and mayhem that fit in perfectly with the New Wave Vaudeville zeitgeist of the times. Once let loose, the creative cacophony has been echoing and bouncing off the walls of our culture ever since. From Bushwick to Istanbul, from Beijing to Kalamazoo, the pop life mixtape has become the default meme of modern living, much of it thanks to Magnuson.

Anyone who was making New York's post-punk downtown scene back then probably saw Ann Magnuson, either at Club 57 or at the Mudd Club or Danceteria or any one of the many other locations that catered to the art-damaged crowd that prowled the then-dangerous streets seeking community, inspiration and excitement. For the West Virginia native, like many other twenty-somethings of her generation, New York stood out as the only alternative to the bland suburban lifestyle that had infected the rest of the country. Punk had broken out in the early 70s and young people were moving to New York en masse. Virtually bankrupt, drug-riddled and littered with burned-out buildings, the nation's murder capitol was nevertheless an outpost of creative eccentricity and cheap housing that made it possible to pursue your dreams. New York may have sucked but the rest of the country sucked even more.

Magnuson loved it and immediately fell in with other like-minded souls who became the nucleus of a scene of art, music, film and performance stars who have come to define that era as New York's last golden age of creativity. Most important of all, she had her first taste of cappuccino which changed her life. "I got totally hooked on coffee," she says. "All that manic energy, all that I was doing was built on coffee. By 1980, Club 57 was happening every day. I'd take a day off here and there and usually that was spent at another club. Every day was spent in at least two different clubs or four or five."

Once a ubiquitous presence, Magnuson's performances are now few and far between. Her return to performance form coincides with two significant events. First, there's Dream Girl, an album she's promoting that literally flows from her subconscious mind, an Ann in Pop Wonderland where ghosts, goblins and unicorns free float among bad Hollywood films and long forgotten TV shows. There's also a MoMA show scheduled for fall 2017 dedicated to Club 57, and as part of MoMA's Modern Mondays series on Oct. 17th, Magnuson herself will take the stage in what's billed as "an evening of song, video, and film clips celebrating the life of the subconscious." Some of her rarely seen performance videos will be shown and one-time partner in crime Joey Arias will join her onstage, along with a few special guests.

For the past 20 plus years, Magnuson has been living a more sedate lifestyle in a Neutra House in Silver Lake and acting in dozens of movies and TV shows. But her first love has always been live performance, a form she perfected running from club to club in a peripatetic, psychedelic, purple haze that tapped into downtown's communal cortex, pressing buttons that made people both laugh and think at the same time.

If there's one figure that serves as a through line from her conscious to unconscious mind, from back in the days in the East Village to Silver Lake now, it's David Bowie. The first song on her album, "We're All Mad," "comes from a dream I had where once again David Bowie shows up as this archetype," she says. "This is the thing about David Bowie. He worked a Jungian archetype called the cosmic man. He worked it very specifically in Ziggy Stardust."

Magnuson has been keeping a dream journal since the 70s and has undertaken a deep study of Jungian psychology in recent years, some of it focusing on Bowie (who she famously kissed – and who famously snuggled her bare breasts -- when they worked together in Tony Scott's The Hunger). "I know that he was a big Jungian. I think he wanted to be a star and it really helped to articulate the Jungian hero journey all of us are on in our own particular way. Using art is a way to be safely psychotic if you are mentally on the edge of reality and fantasy where many artists happen to be."

Even in her less manic California phase, Magnuson still seeks a comfort zone between reality and fantasy. "In the dream, Bowie wanted me to be in his new music video lip-synching to this song 'We're All Mad.' It's a wordy ballad and I couldn't remember the words and he got mad. I woke up and wrote that song to convey that world of dream; the fantasy unfolds through the psychedelia of late 60s, a genre Bowie was really into. So the first song on the CD sets the stage for this Alice in Wonderland kind of journey. Candy Land was one of my favorite games. That may have something to do with it."

I mention how much I miss the live performance when listening to the record. "This record is more an audio experience and people are meant to create their own videos," she says. "A theater of the mind." Whereas much of her material used to come from the world around her – TV and pop culture being two mainstays – she's tapping a different source now. "I don't have a TV. I don't pay attention to pop culture. I pay attention to my dreams. I watch documentaries that end up in my dreams."

As for the MoMA show preview, she's reunited Bongwater, a band that performed psychedelic satirical covers and original material after she left Club 57 in the mid-80s. "We'll be telling stories," she says. "There'll be some videos. And it'll be a dreamy psychedelic experience. First time all played together since band broke up."

Largely because of the AIDS epidemic, the community was decimated. Many of that eras change-makers died, leaving its survivors with a kind of PTSD Magnuson still grapples with many years later. "AIDS was our World War I," she says. "If it hadn't been for being in bands and putting on shows and putting on art, there was no other way to get through it. It was our life raft. We all came to New York for that reason as well. We didn't fit in suburban America at that time. And I don't think people really understand the context of the times. All that stuff going on downtown existed in its own world because the outside world didn't get it until a certain point, because there was no money to be made from it yet."