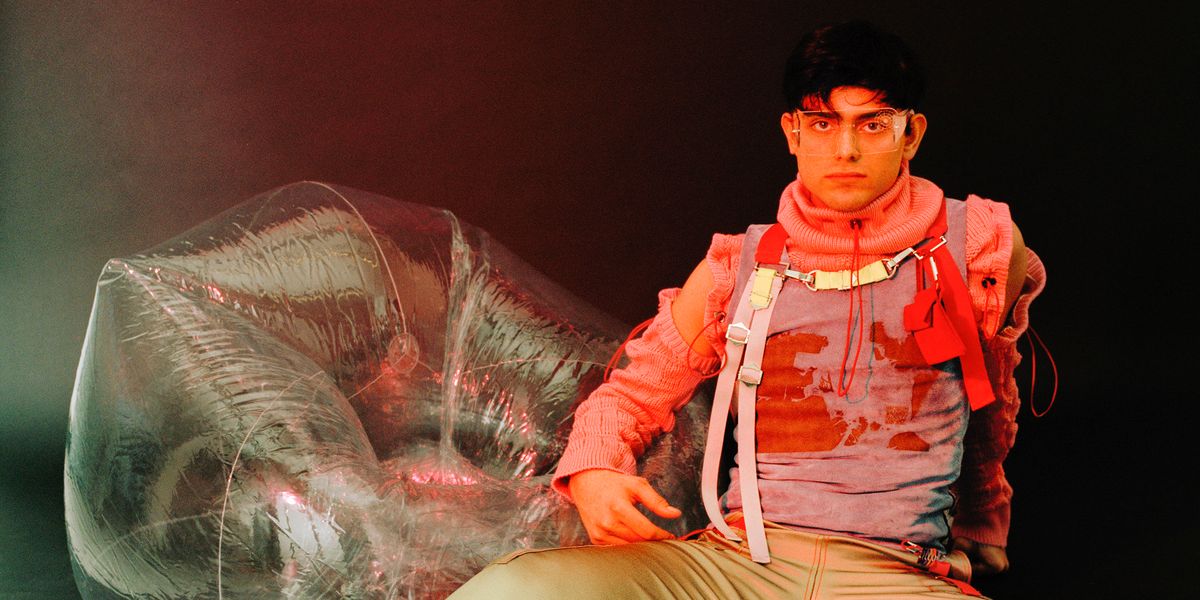 This Recent Parsons Grad's Debut Collection Is Out of This World

Long before Ukranain-born designer, Andriy Volkov, landed at Parsons and completed his otherworldly debut collection, the young creative was projecting a dream that spans beyond time and space. Having started his journey when he took up painting at the age of 3, Volkov's lifelong pursuit bridges worlds and connects a series of influences. Aside from a handful of contemporary masters in fashion design, the emerging artist is mostly moved by more traditional things. "I look up a lot to an old school Ukrainian "warrior" spirit represented in many Cossack folk songs, dances, and costumes, " he tells PAPER. "Just the fact that so many of my relatives took a difficult path, and had it much harder than I do, motivates me and helps me create."

While Volkov's path has been marked by a different set of experiences, it hasn't been without its own challenges. As a kid ostracized from any like-minded people, he sought refuge in creativity and honed his skills during an adolescence that took him around the world: he moved to Edinburgh for middle school and Ithaca (New York) for high school, where he started fashion illustration and zeroed in on his calling. "As an Eastern European immigrant and a gay middle schooler, I was a very lonely kid," he says.

Using the time alone to delve into his growing interests, Volkov retreated to his mother's closet after school to sketch in silence. By high school, the budding designer found his niche and "took every art class available at [his] school and the school's first ever fashion illustration class." Eventually landing at Parsons School of Design, Volkov got what he describes as "a very well-rounded education" that culminated with a senior year thesis project that's also his thesis statement: a Fall 2019 collection that jumps through time in exploration of spirituality and the bloodline connection to distant relatives as well as the possibility of free movement in space and infinite life through the recycling of matter. This sums up a large part of the designer's inspiration and expansive worldview. "Parsons definitely conditioned me to start concept first. I believe that design without intent is unnecessary, but stay very open-minded on what that intent may be," Volkov says.

As for Volkov's creative vision, the designer's research is as plentiful as his list of references. From space travel and the cosmos to astronomer theories and Space-Age science fiction, his exploration of the unknown goes far beyond the stratosphere. What's most compelling about Volkov's research is what he ultimately pairs it with to create all of his handmade designs. For the heritage part of his collection, he dug into a photo archive his grandfather digitized of the family's memories. There, he found a photo of his maternal great grandmother as a young teenager that was taken in 1917. "I superimposed different abstract space images and NASA font text onto those family photos. I then printed the photos on fabrics like poplin, chiffon, and denim and also designed and printed the scarves in chiffon and satin," he says.

To create the transcendent photos that feature his first collection, Volkov worked with photographer, Stevens Anazco, and the model David Romo, who was also his roommate freshman year at school. "The shoot was a lot of fun," he says of the experience. "What you see in the photos is the end result of the past 6 months of excitement, hard work, and collaboration.

Having just shown his debut collection, the artist is ready to share his brand's ethos with the world, stopping only to imagine the public figures that he dreams to dress. "I would love to dress A$AP Rocky. I have 4 babushka scarves in the collection so this one is kind of an obvious choice. I'd also love to dress Pelayo Diaz. I've been following him for so long and I feel like he has the vibe I aspire towards. This sort of a soft masculinity. I'd also totally dress Kim K in the trench because it's reflective and who else would have that many flashes coming at them."