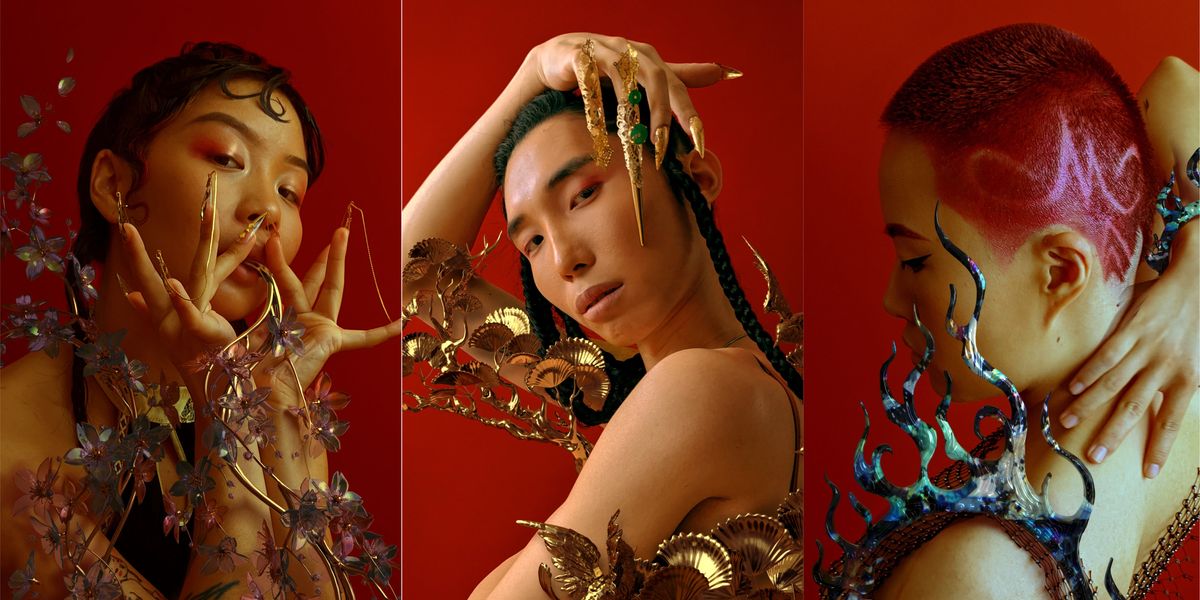 LA-based visual artist Andrew Thomas Huang is known for turning fantasies into realities — garnering a Grammy nomination as director of FKA twigs' dream-like music video for "Cellophane" and exhibiting work at NYC's The Museum of Modern Art and The Sydney Opera House among other renowned galleries — but that signature, transformative aesthetic took years of creative development to crystallize.

After graduating with a Bachelor's Degree in Fine Art and Animation from the University of Southern California, Huang experimented in video production through a multitude of world-building short films, which ultimately led to the production of two monumental projects: his first feature film, TIGER GIRL (2017), and his Tribeca Film Festival short, Kiss of the Rabbit God (2019). From animated films to music video collaborations with the likes of Icelandic artist Björk and Radiohead's Thom Yorke, Huang is acquainted with many mediums in the art realm, and his resume only continues to expand.

The week before stay-at-home orders hit LA in mid-March, Huang played photographer and shot his last group photo series: a selection of bold images that highlight the faces of queer, trans and nonbinary Chinese diaspora. Exploring the "idea of intra-community support or peer mutuality," Huang examines the ways in which members within a respective community lean on each other for support.

What began as an illustrative series intended to celebrate the societal bond of a marginalized community has evolved, from the lens of the pandemic, to expose even deeper depths of Huang's work. On the visual end, models Aus Wang, Stella Dang and Jas Lin stand surrounded by opulent, floral sculptures, boasting lavish, gold nail art and expressive hair coloring and styles. Foregrounding the individual experiences of his subjects, where they "have been saved or helped by an ally or another queer or Asian person from their community," Huang stresses the importance of creating safe spaces for one another in times of strife.

The incredibly impactful photo series arrives in collaboration with Google and LENS' Creator Labs platform, which launched last December through an exhibit in New York's SoHo neighborhood. The incubator program's co-founders, Steven Chaiken and Ava Donaldson, recognized the hardships artists are facing amid the global health crisis and wanted to provide a space for talent to be inspired. Huang worked in conjunction with the Creator labs team to explore themes of intra-community support and shot his entire series on the Google Pixel 4.

PAPER spoke with the artistic visionary about the entire process. Read what he had to share, below.

What does this theme of intra-community support and peer mutuality mean to you?

I'm noticing during this time that my QTBIPOC friends are all directly supporting each other, sharing each other's fundraisers, uplifting each other's struggles, celebrating each other's victories, and striving to give equity and resources to those in need. This is what peer mutual aid looks like and it's driven by radical compassion and solidarity. At a time when systems of power are crumbling and traditional institutions can't be trusted to provide for people, it's heartening to see marginalized people show up and care for each other.

Why did you choose to photograph these subjects in particular?

Earlier I had just finished a self-portrait series, and this time I thought I would look outward instead to pay tribute to other queer, trans, and nonbinary Asian artists around me. Aus Wang is an actress, model and musician who I had the pleasure of meeting during a casting session last year who I had been wanting to collaborate with as she has the most incredible energy and instincts as a performer. Jasmine Lin is a performance artist, dancer and movement facilitator.

I find their work so inspiring and we have bonded over shared interests in unearthing queer characters and stories in Chinese folklore and mythology. Stella Deng is a painter, model and art director. She was the production designer and cultural advisor on my film, Kiss of the Rabbit God, and she and I have spent many late-night conversations talking about love, Chinese heritage, ghosts, magic and witchy things.

These portraits feature unique botanical jewelry and ornaments. How were they chosen for their respective photographs and what was their role in this series?

The hair, makeup and nail art was created by Tanya Melendez (@ladysoulfly). She is one of my favorite collaborators, a true visionary and a master at adornment who knows how to transform people into kings and queens. The additional sculptures around the models are CG, which I modeled and rendered in ZBrush, Maya and Arnold. For Aus, I wanted something elegant so I researched Buddhist ornaments to create gold sinewy lotus stems, leaves, buds and flowers with jade gemstones to frame her.

For Jasmine, they were wearing this black velvet top with gold embroidery and their nails had these beautiful gold chains so I thought something jeweled would be nice. I came up with flower designs which are inspired by jade glass bonsai trees that I would often see in my grandmother's house or in Chinese restaurants and businesses. For Stella, I needed something futuristic to riff off her crimson shaved hair, so I went with something harder: a ring of Chinese flames textured with turquoise marble. I kind of wanted it to look kinky like a harness.

What role did COVID-19 play in how you've approached creativity since?

I think the pandemic is a lesson in how to draw from our inner reserves again. Whether it's writing, thinking or crafting, we have to return to what we can do solo with our own two hands. We have to sit with our own demons for better or for worse. I'm grateful for this test and hope we come out the other side of this more mindful, responsible creators and thinkers.

How has your partnership with Creator Labs evolved since you became involved and how has it impacted your work?

Creator Labs has been an immense support for me. I am grateful to Steven Chaiken at LENS who reached out and gave me the opportunity to create personal work in a safe and nurturing environment. My first project with them was to shoot a photo and video project, called Lily Chan & The Doom Girls, which is a proof of concept for my feature film currently in development.

It features Asian American teenagers in the 1960s and the video I shot last year with Creator Labs is a narrative scene extracted from the feature screenplay. This most recent photo series is a natural extension of this work as it continues my personal interest in experimenting with new ways to imagine queer Asian-ness and Asian American stories. Creator Labs has been enabling and I am excited to continue my work exploring new modes of Asian representation in my work.