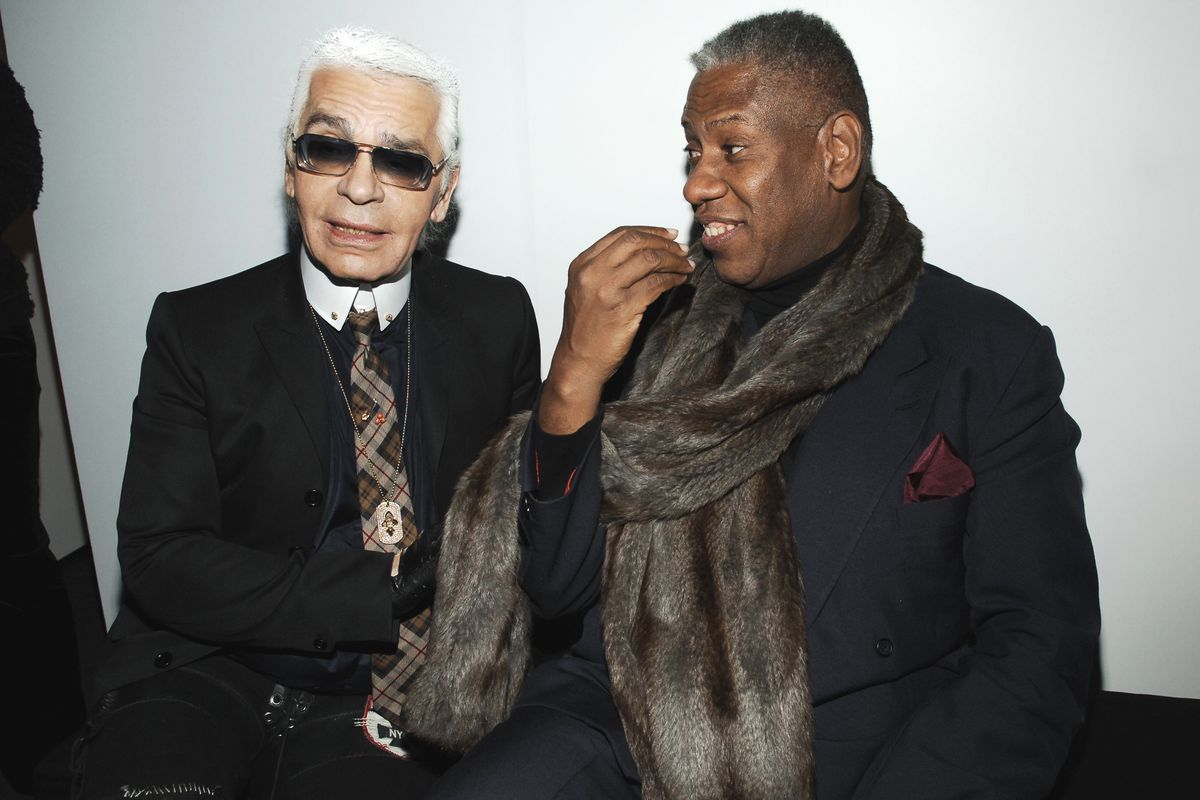 Over at Vogue, former editor-at large André Leon Talley has penned a moving tribute to his friend, "surrogate brother," and "one of the giants in my life in the chiffon trenches," Karl Lagerfeld. Talley and Lagerfeld were close for years, often talking on the phone until four in the morning. They took glamorous trips together and befriended the same supermodels and heiresses. Talley provided suggestions on Lagerfeld's designs; Lagerfeld gave him an education in luxury, and made him custom Chanel couture suits. The whole essay is decadent, both tender and gossipy. It's worth a read, but we've pulled the highlights here.

On their first meeting:

I've known Karl since 1975; we met for the first time at The Plaza hotel in New York over tea with Andy Warhol. Karl mentored me in everything: French history, literature, the history of fashion, art. From our first moments, we were like the brother each of us wished we had, true siblings. Even on that first May afternoon, he invited me to his bedroom suite, simply to throw the most luxurious silk shirts from his Goyard trunks at me. I walked away with a wardrobe of beautiful shirts, his own, and matching mufflers.

Karl was extravagant, generous, and very, very kind to his friends, until he had a rupture; then he would simply delete one from his life, cutting all lines of communication with no explanation.

His kindness manifested itself in various ways, from loans of his 18th-century furniture to gifts of Fabergé diamonds, which he gave me for Christmas in 1989, the year my grandmother died. He also flew me on the Concorde round-trip to Paris, and I stayed in his country house outside of Paris for two weeks. Nothing was sloppy in any of his homes: Diptyque candles, the best sheets in the world, and all meals served at tables for lunch and dinner. One had to dress for each meal. He loved changing clothes, sometimes three times a day. Chauffeurs and cars were available for excursions to the local news kiosks.

On their close friendship:

Karl and I could speak for hours by telephone; he loved late-night marathons. Often when I lived in Paris, we would ring each other at the end of the day, around 11:00 p.m. And he would always say, "Mr. Talley, how are you?" And I would say, "Mr. Lagerfeld." Sometimes the conversation ended near 4:00 a.m.

On Karl's opinions of other designers:

Like Chanel, the woman who laid the archetype, he couldn't find anything nice to say about another fashion designer's work, yet he knew from memory every Dior and Balenciaga collection, the entire evolution and history of each venerable house. I know people were impressed with our friendship and that carried a lot of weight in the industry. He was my surrogate brother.

On the last time they saw each other:

The last time I saw him was two years ago, when Stephen Gan threw a swell party at The Boom Boom Room. Naomi Campbell came in her vintage Fendi dress designed by Karl. Mariah Carey serenaded him from the stage as a surprise. It was like the halcyon days. I will always remember this man as a friend. And as one of the giants of my life in the chiffon trenches.