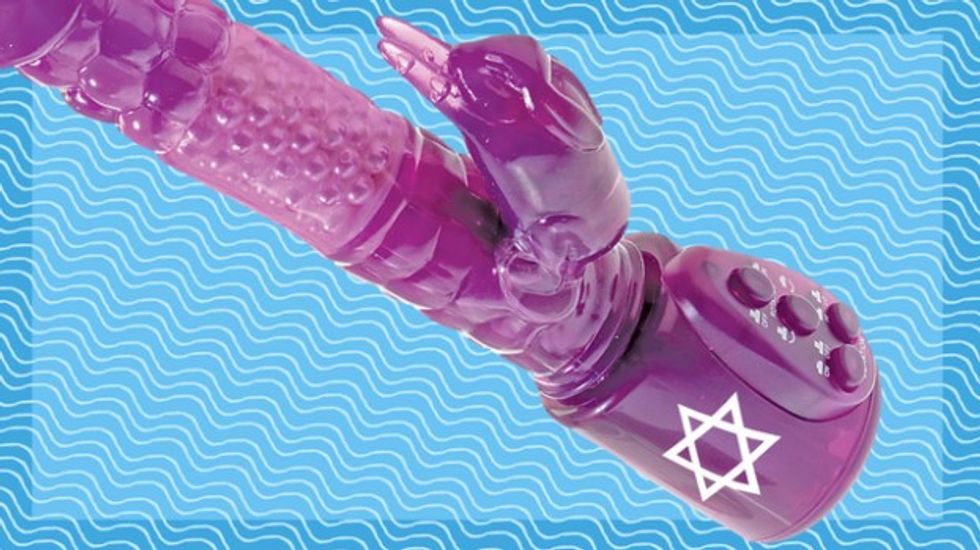 by Eric Thurm
PAPERMAG
"It's not about my orgasm. It's about our orgasm," Rabbi Natan Alexander tells Yaacov Benmeleh. He's explaining the name of Better2gether -- the sex store he created for Orthodox Jews -- for Benmeleh's story about him for Bloomberg.

The gist of the piece is that Alexander is trying to provide a service for Orthodox couples--Benmeleh writes that "ultra-Orthodox women who grew up secular often come to him hoping he'll encourage their husbands to go the extra distance between the sheets," treating him as a kind of go-between, bridging the frequently restrictive world of observant Judaism with very distinct attitudes toward sex which, if not secular necessarily, at least place a higher emphasis on pleasure and sensuality.

It's a crucial service too, since Better2gether often also functions as a sort of rudimentary sex education for people who have no experience with what they're supposed to with their bodies. In fact, Benmeleh notes, some Orthodox couples seek fertility treatment, not knowing how sex works in the slightest -- the women "appeared to still be virgins."

Looking through the Better2gether site is, in many ways, embarrassing. It's full of painfully plain language explaining how hard a dick is supposed to be, blunt and crudely positioned on a somewhat poorly-designed site intended for the use of fully grown adults, and they convey a strong sense that the reader does not want it to be known that they're reading. (Subheadings take the form "Questions Men Want To Ask," "Questions Women Want To Ask," and so on, trying to give a voice to unformulated concerns.) It's like basic-cable ads for slightly more lurid sex stores -- the entrance is always, wink wink, in the back.

And there is a whole market of religious sex toy shops -- all of which, even across different major religions, read very similarly. Practically all of them justify their existence like the Christian sex toy retailers Covenant Spice, which advertises its products as having been "extensively researched and scrutinized to ensure it is in classy nudity-free packaging and designed to be used together by husbands and wives." Sites like Married Dance refer to the validating power of The Marriage Bed ("Offering scripturally based, scientifically accurate information on sexuality since 1997!") or assert their own qualifications, like the "Shariah compliant," "sensual arabica retailers" El Asira.

Without trying to provide an overarching theory of religious sex stores (let's leave that to the grad students), it does seem like there is a lot of interesting stuff to think about here, that might raise bigger questions than just the confusion or curiosity or humor value of Better2gether's existence.

They all appear to be about defining proper use, prescribing when it is and is not okay to use objects that enhance their enjoyment of sex. As the Better2gether site puts it, "Couples should feel comfortable to use sex toys to enhance their love lives without having to bring images of complete strangers into their experience." Sex is for you and your partner (and also religious authorities, assuming they're cool with it), hinting at one of the plausible benefits of taking this sort of position toward sex -- permission is sexy, as is the right kind of privacy.
Simply because religious sex toys (and their theoretical and practical applications) are largely invisible does not mean they are non-existent -- in addition to Better2gether and assorted Christian and Muslim sex sites, he cites several other Jewish sex enterprises. Some of these are successful, some not, but it would be foolish to claim that there isn't a market for a hyper-specialized religious-sexual product, one that Benmeleh claims may be growing along with the burgeoning sex industry.
And while it might be easy to dismiss incredibly specific, perhaps uninformed sex within religious boundaries as somehow less enlightened, for the initiated, it's simply a different attitude toward one's body, one that we might not be capable of fully understanding or appreciating from the outside. For a more concrete, easily digestible example, turn to television -- remember the Louie episode about masturbation? If not: Louie literally goes on a talking head show to defend masturbating (he was the only person producers could find), and is confronted with an unfailingly kind, firm, and faithful woman who simply doesn't believe in premarital sex.
After their debate, she gives him a tantalizing glimpse of what his life could be like, painting a picture of an attitude toward sex that still values physical pleasure, but as an expression of spirituality and love -- something that might not satisfy some, but is certainly a more-than-valid attitude toward sex. Still, the qualifier in Better2gether's pitch hints at the other main selling point of religious sex sites, one that is a bit harder to forgive -- avoiding potentially corrupting influences.
The language on each of the sites is remarkably similar in this respect -- for example, Married Dance advertises itself as "free from nudity and other non-Christian content." Yet this insistence may be part of the reason why couples are in such dire need of sex education in the first place, and could prove counter to Alexander's, er, mission. That the site itself might be considered a corrupting influence helps explain why he's found it difficult to attain explicit endorsements, even though he claims most rabbis have been sympathetic to his project.
Will Alexander be successful in worming his way into the lives of people who could be brought to accept, but are generally primed to ignore or reject the values and experiences he's trying to impart? Is there a middle ground between Louie and the anti-masturbation crusade? It's unclear right now, but something tells me that, no matter how hard he pushes his project, after a while Alexander might be forced to pull out.
(image via Jewrotica.org)
You May Also Like
Care