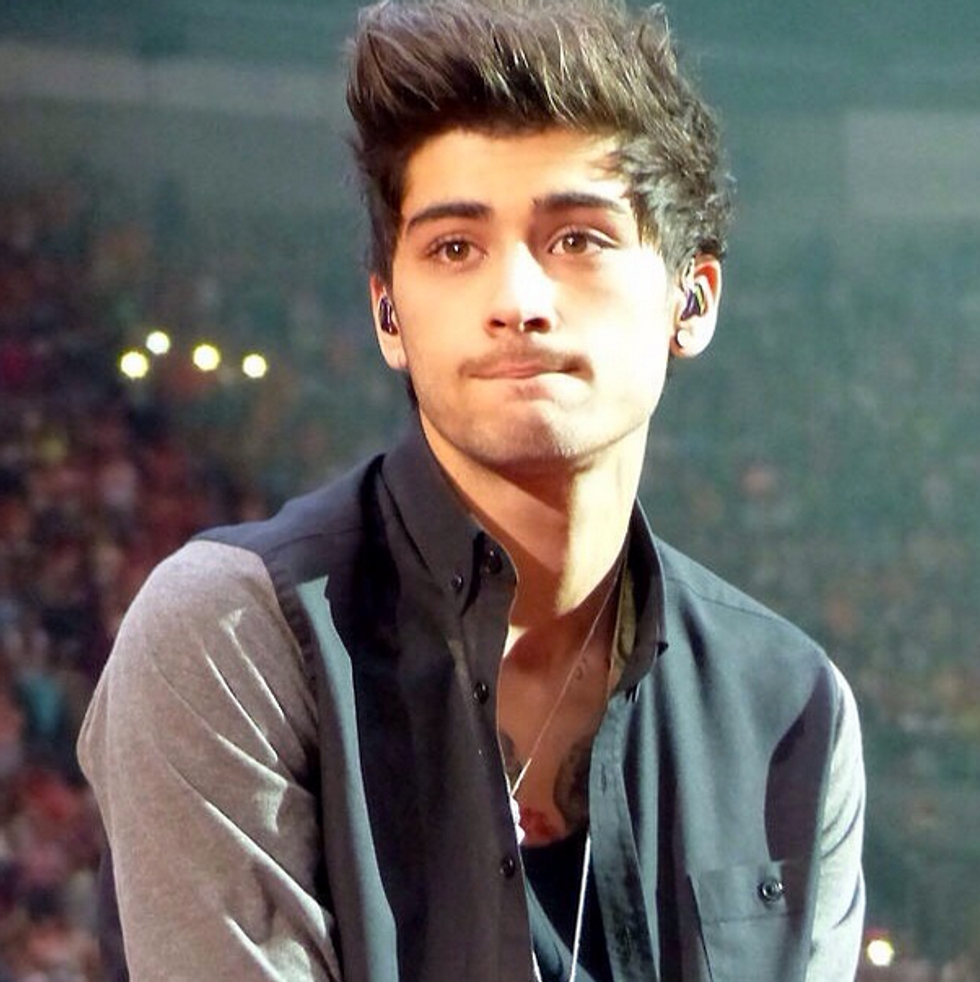 An Ode to Zayn Malik

by Joel Kim Booster
PAPERMAG
I am not a fan of One Direction. I am a fan of one Direction: Zayn Malik.
Out of all the boys of 1D, it makes sense that Zayn would be the D that would depart the band first. He is, after all, the thinking man's D. The D of the disenfranchised and the outsiders. The only D I need.
Do you remember where you were the first time you first whispered the name Zayn? I do. Hunched over my work computer, an old episode of SNL playing in the background, when suddenly a cherubic brown-faced boy appeared on my screen full of swagger, wrapped in a crimson blazer singing about "One Thing."
He was singing it directly to you.
You could feel it almost immediately, couldn't you? This boy was different. This boy had something special. Why were these white back-up singers being so prominently featured when it was so clear this performance should be singularly about this one creature that you and you alone so clearly dreamed into existence. This boy -- oh shit.
Oh shit oh shit oh shit.
How old was this guy? Was what I'm feeling even legal? Oh no.
Thankfully, after a few moments of furtive, breathless Googling, you were relieved to learn that he was 19. Which is still not great -- you realize that, right?
But to your surprise, you weren't alone in your adoration. The various denizens of Gay Twitter, Feminist Twitter and Black Twitter --  frequently at odds in an ongoing war of microaggressions and problematic pop culture -- banded together at once to rally behind Zayn. Grown men and women united together by their love for every one of his ill-advised tattoos, his devotion to his family and heritage, his bravery in the face of internet cruelty. If there was one group of people who could stand in the face of the terrifying hordes of teenagers that made up One Direction Twitter, it was us.

Through feats of projection and fantasy, adults across the internet would claim Zayn as their own, imposing their own individual narratives onto his story. The beautiful outsider, the misunderstood bad boy, a brooding woodland creature for us to collectively protect and objectify. While the rest of One Direction busied themselves with youthful indiscretions and perfecting the hetero piggyback ride, Zayn had bigger things to deal with: getting engaged and grappling with Islamophobia.
Despite all indications that this band was not for us -- for people pushing 30 with real jobs and real problems  -- somehow Zayn's presence made us feel welcome.
I should maybe clarify that he's not dead. Zayn is not dead. He just quit a job, like you or I. He will continue to be an object of affection and lust. But now that he's left the band, he's taken with him our last remaining connection to the bottom rung of the Millennial tentpoles.
So we shall sit and grow old. Walk into the sea or turn into pillars of salt, disintegrating silently into the wind until death finally takes us. Or Zayn's first solo project is released.