An Ode to Tilda Swinton: Her 5 Most Swintessential Moments 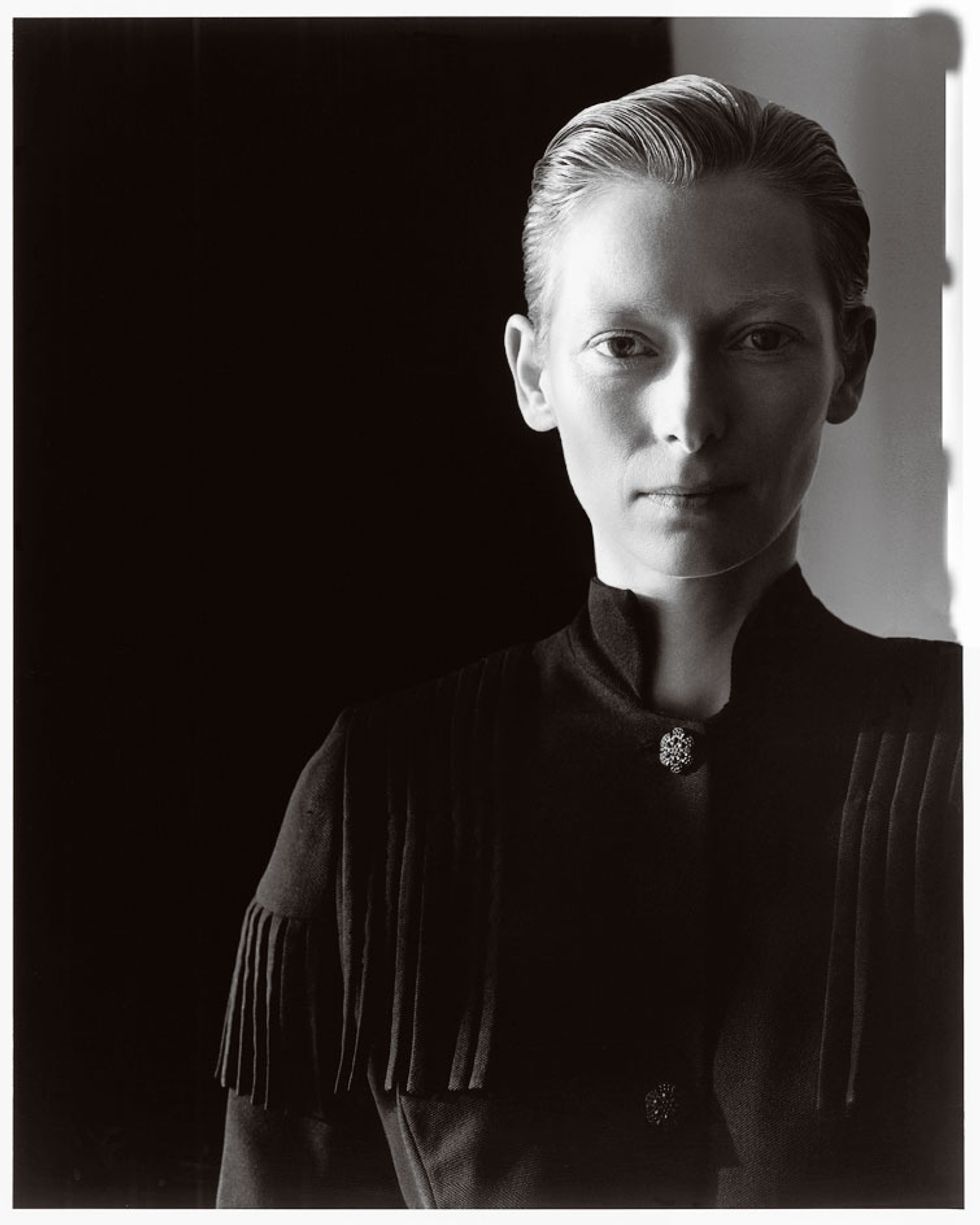 Tilda Swinton photographed for Paper by Richard Phibbs. March, 2004.
We asked the guys behind the brilliant Tilda Swinton parody account @NotTildaSwinton to tell us what they love about their muse. Below, five examples of why Swinton is the coolest. As if we had to tell you.

With Tilda Swinton set to add yet another iconic performance to her already very colorful IMDB page with Jim Jarmusch's Only Lovers Left Alive, opening this weekend, we've decided to take a look back at some of our favorite bits of Tilda (which proves to be a very difficult task, because there are so many.)  While we tried our best to capture the confidently abstract essence of Tilda, the genuine Tilda is always one step ahead. We've managed to break down our general love for her into the following Swintessential moments: 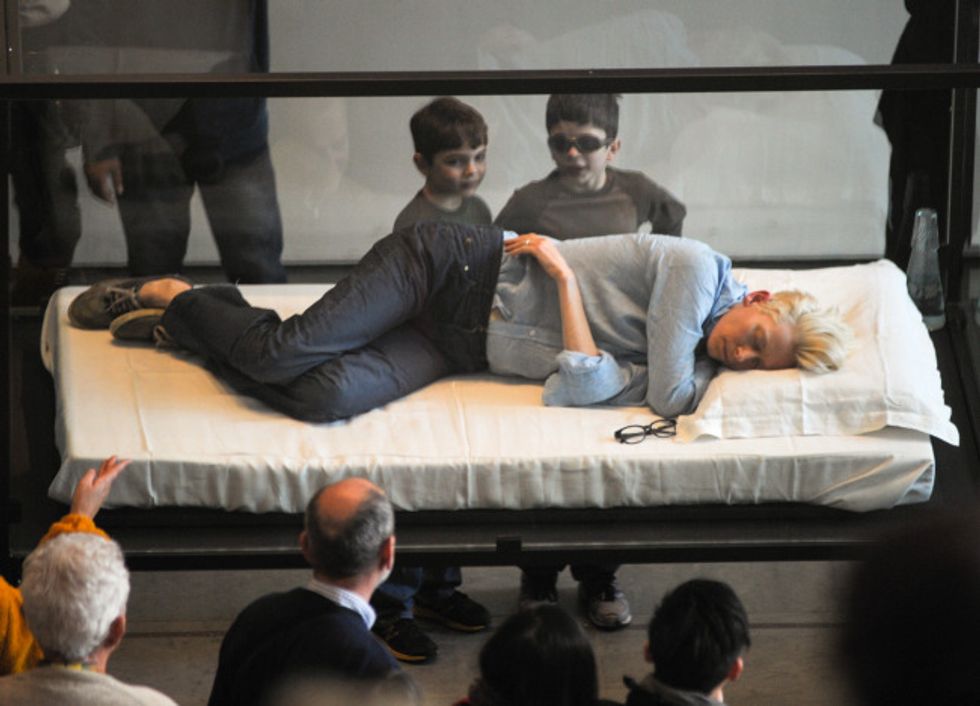 Most recently, Tilda surprised the world with her performance of "The Maybe" at MoMA in New York.  Visitors were given access to a glass box that may or may not contain a sleeping Tilda at any moment.  Often dressed in casual denim, Tilda showed that even when she's at her most ordinary, she still manages to captivate, with observers traveling in droves for simply the chance to witness the elusive actress in her element.  Some artists would've been tempted to wear or add something strange to the installation, but instead she embraced the simplicity of the idea.  Even as people tweeted at us furiously to "do a joke about the box," we could do nothing but shrug, because what else was there to say?  She one-upped us without one-upping us, as expected.

In 2012, Tilda won the Academy Award for Best Supporting Actress for her role in the legal drama Michael Clayton.  And as she approached the stage, we waited with bated breath, because any time Tilda Swinton is near a microphone, something truly mystical is sure to follow.  And, never one to disappoint, we were treated to the now famous opening of a "Happy Birthday, Man" delivered to the statue itself.  The next minute and thirty seconds was a whirlwind of soundbites, including a comment on the shape of her agent's head and buttocks, and a seemingly non-sequitur compliment on the infamous "bat-nipples" of co-star George Clooney.  And then, as quickly as she'd arrived, with a reveille of three rapid thank yous, she vanished.  Future Oscar Winners and Halle Berry, take note. 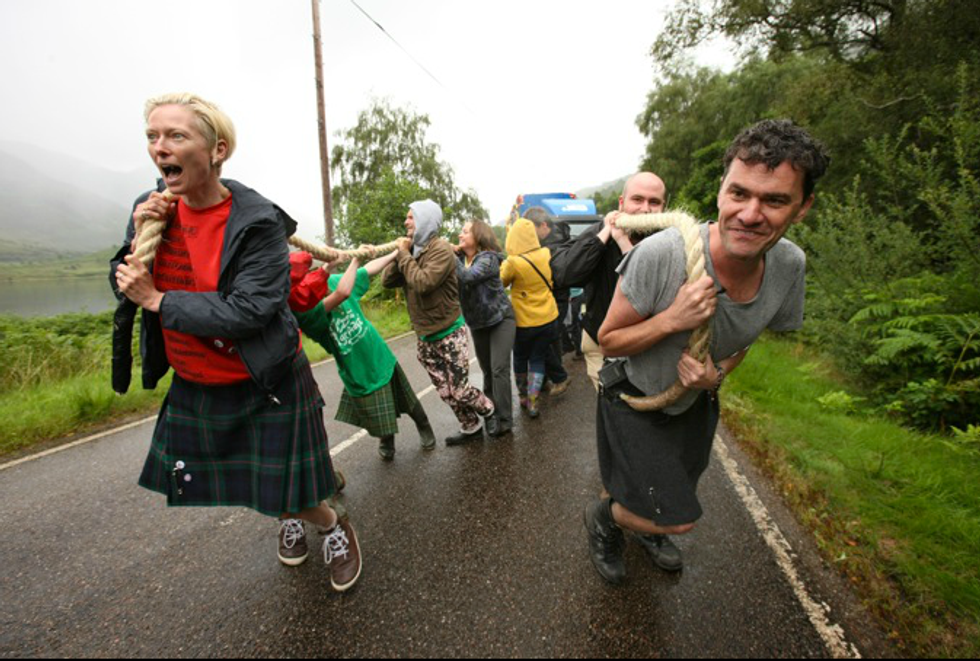 In 2009, Tilda, along with film critic Mark Cousins, decided to create a film festival.  However, as to be expected, their vision of a film festival was far from the static schmoozefests of Sundance or Cannes. Instead, it consisted of a mobile cinema, mounted on the back of a truck, towed throughout Scotland with heavy ropes thrown over the shoulders of human beings, including Tilda herself.  Listening to her in this clip, cheerfully commenting on the endeavor while simultaneously pulling a fucking truck through the cold damp highlands, speaks for itself. 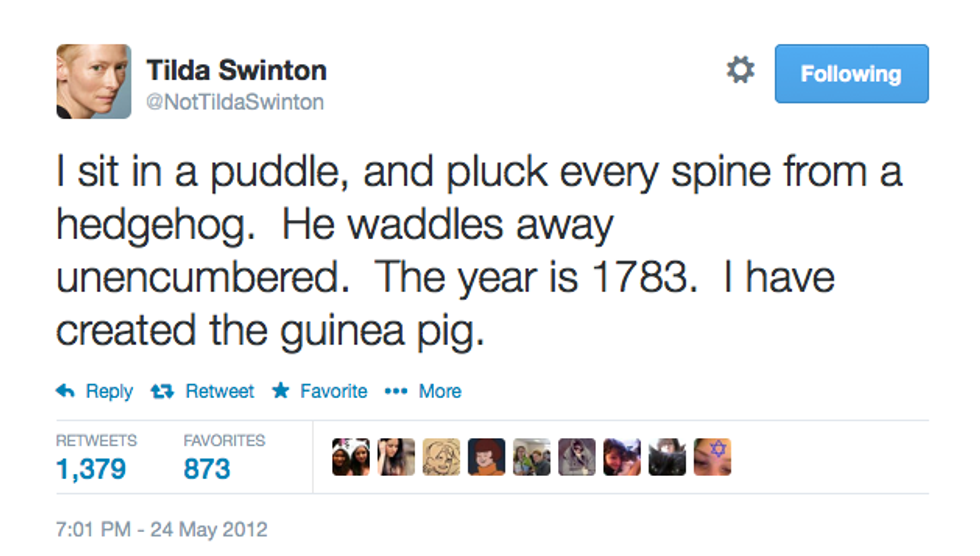 Fourth is also the reason PAPER sees fit to have us write this little homage in the first place.  After creating a fake twitter account as the mysterious actor, one of us in the throes of Oxycodone following a wisdom tooth removal, both of us in the bleak haze of postgraduate unemployment, it unexpectedly struck a chord with people on the Internet, and suddenly we had to consider the fact that Tilda herself... might actually see it.  Plenty of celebrities who've been parodied through Twitter have had the accounts shut down or criticized them.  Instead, after a collection of tweets in which we intimated that she had: given birth to a bat, been both birthed and swallowed and eaten again by a coyote, and invented the guinea pig, we simply received a brief e-mail from a somewhat vague e-mail address, giving us her blessing, and then, finally, instructing us to "now eat this computer."

Lastly, we'll leave you with this clip from Ebertfest 2013.  For all the perceptions of her being this avant-garde, strange apparition, she still understands the primal importance of a dance-off with strangers.

We love you, Tilda.