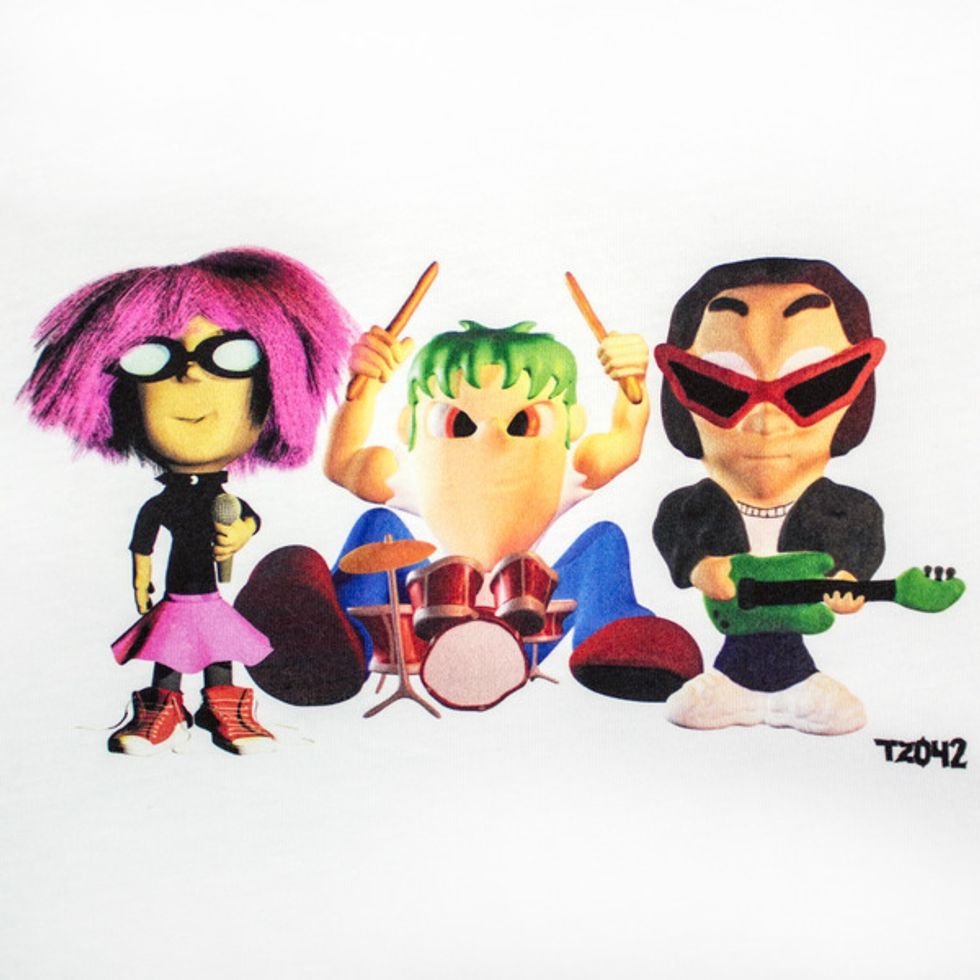 Very specific, sort of secret and filled with a lot of potential to be a game developer's goldmine, the online-based artistic trio known as Last Renaissance is changing the broader perception of reality with their DIY-leaning, weird Internet-based body of work. A collective with a focus on character creation, their oeuvre opens up interesting discussions surrounding fact versus fiction, alternative narratives and aesthetic performativity -- and as such, we spoke to the unintentionally-enigmatic group for their first ever interview about all of the above, as well as their new lookbook of band merch designed for a fictional Thunder Zone outfit. Peep both below.

This is your first real interview, right? Why the secrecy thus far?


Yes, but there's no secrecy, really. No one has ever interviewed us.

Tell me a little bit about your practice. What exactly is Last Renaissance's artistic ethos? What component of the cultural conversation do you feel you guys provide?

Our practice is emailing each other, clicking around various 3D software packages and putting off learning how to use a Wacom [tablet]. Last Renaissance is basically an endless variation on a specific type of figuration that we associate with characters. We want to create our own particular universe of characters, and maybe one day we will create a character that will end all characters--a gesamstkunstkarakter.

We don't see ourselves contributing to the cultural conversation in a general way -- other people are more qualified for that. But, hopefully, the work we make will influence people who make video games, cartoons, toys and packaging.

How'd you guys initially start working together? What drew you to each other artistically?

We all met in San Francisco and our initial way of working was just walking around San Francisco a lot. We were drawn to each other mostly because of our sense of humor and the way we understand characters. Later on, it became important to us that none of us went to art school and we are all sort of untrained. That's not at all a diss to people who did go to art-school, it's more just an important part of the way we learn to make things.

Who else have you collaborated with in the past?

A while ago we collaborated with Yannick Val Gesto for a show at bebispace.com. We recently did a show with Water McBeer at NADA Art Fair, which is sort of a collaboration, maybe? Other than that, we've never successfully collaborated with anyone before working with [musician] Kaoss Edge.


Speaking of which, how'd you link up with Kaoss Edge? What was that collaboration like?

We've known Kaoss Edge for years now and have been wanting to do something together. Working with them was great -- their emails were all sort of cryptic and out of order.

Tell me a little bit more about this Thunder Zone collaboration -- what themes unify the tee collection?

Thunder Zone is mostly associated with bands, so we decided to create our own fictional band tee. We like the idea of making something that appears as a promotional item, but is unclear as to what it's promoting or referencing. The characters look like a band, but it could be from a new rhythm game or a kid's show or a bootleg Gorillaz shirt.

Tell me more about this fictional band. What's the narrative you guys have envisioned for it?


Nothing very concrete about the band we created. It doesn't even have a name yet. We may build on this project more but maybe not, maybe the band we created for the shirt is a "one hit wonder". Many famous characters have memorable names. Maybe these are some of the only characters ever to not have names... At least for now.

Is there always a multimedia component to your projects? Whether it be visuals printed on a shirt or music to accompany your videos? Does "multimedia" play into a big part of your practice as well?

What else is in store for you guys down the road?

Hopefully, a full video with Kaoss Edge and a historical fiction video game.

Historical fiction game? Like Oregon Trail type stuff? Will it have anything to do with the band?


We have produced games in the past, but haven't released them to the public. Some of our favorites games include puzzle games, word search, and bingo. We are [also] planning to release our first-ever puzzle game in the near future.


You guys also seem to have a pretty interesting take on fact versus fiction, which is evident via your brief discussion on characters. Why does blurring the lines of reality appeal to you guys? Why put a focus on adopting characters? Is there something to be said about them being easier to brand than yourselves?


[We focus on] things that contain themselves, but usually expand within a world of unexpected sensibilities. Adopting [and focusing on] characters is like choosing what to wear everyday -- [we] love to mix-match, pretend to take another persona, or reduce ourselves to an internal cartoon voice. Style [is the focus], but style is attached to everything [and acts as the basis of a lot of ideas], so we tend to love everything about characters. Characters mean a lot of things, but they also mean nothing.