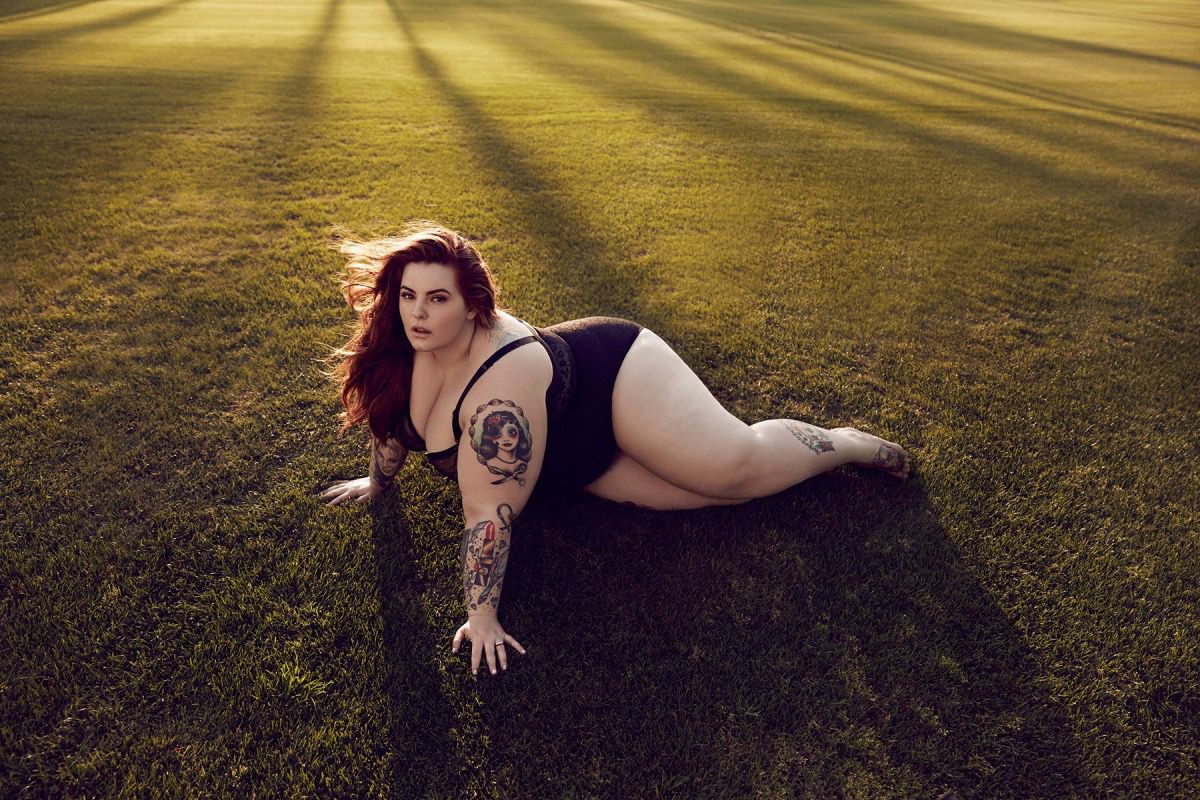 An Afternoon Off with Tess Holliday: The Fat, Fed-Up Supermodel Ready for a Revolution

Tess Holliday pulls the wire from her strapless bra and passes it across the bread basket to her husband. "It's bigger than my head," the latter says as he holds it to his face and peers through, comparing the size of Holliday's left breast to that of his own head after the three of us order lunch in a downtown New York restaurant. International plus-size model Holliday is famous her enviable assets, but as I cradle the abandoned crescent her relief serves as a reminder that beauty — and perky tits — is pain.

Strapless bras are not Holliday's only adversary. As a size 22, the star has battled for her place in the fashion industry from the outset. Ironically there are likely more women that identify with Holliday than the likes of Bella Hadid, with an estimated 70 percent of women in the United States wearing plus-size garments (size 14 and up). Tess Holliday has subsequently become the voice of these women‚ her unrelenting campaign for inclusion and body positivity losing her a few lucrative jobs. Holliday herself is filter-less — she'll often make a hard-and-fast statement about fashion that Nick will then diplomatically translate, delicately smoothing her words. But Holliday embraces her rough-edges wholeheartedly, more often than not assuming a Diet Prada-esque role in the industry, primarily by calling out brands and models who profit from her community while refusing to embrace it. Many are politely shocked when they hear the title of her new autobiography, The Not So Subtle Art of Being a Fat Girl, Holliday reveals as she reaches for the basket of mini baguettes ("I'm going to be that person who grabs the bread first"). But she's long-since become accustomed to labels the "fat" and "plus-size," and hopes to remove the venom from these descriptors.

"One of them was just in a Lane Bryant campaign," she continues, perhaps referencing supermodel Lane Bryant's primary face, Ashley Graham, who famously denounced the term 'plus-size.' "How can you build your career from taking money from plus-size women and then turn around and say the term's not good enough for you? I don't want to be called 'curvy sexy-licious,' that's ridiculous. It's insulting! We can't even be who we are. I get the whole 'not being into labels,' but it's for a plus-size woman being like "I'm plus-size, she's plus-size, I'm fat, she's fat." It's not a hate-term, it's how I describe my body."

Her commitment to empowering women led her husband, the Australian photographer Nick Holliday, now sitting between us at the table, to reach out to her on Tumblr to compliment her work. The photographer flew out 10 months later to finally meet Tess Munster IRL. If you recognize the name "Munster," you likely remember, or in Tess's case revere, the hit 1960s sitcom The Munsters. Born Ryann Hoven, Holliday was inspired to change her surname to that of the fictional family after her tumultuous upbringing in Mississippi. Considering her early life genuinely resembles fiction — Holliday's mother was left disabled after being shot in the head by her fiancé, after which time the two lived with Holliday's grandparents — it makes sense that the model might have wished to escape reality.

Tess and Nick on their wedding day.

Holliday approaches all elements of her life with this same self-assurance. She mistakenly orders a salad with anchovies, and despite Nick's offer to extract every last fish, she will not pursue the meal any further. Despite giving birth to her son at only 20 years-old, she's hugely successful. When Nick first reached out to her online, it was Tess who told him she found him attractive. After painstakingly waiting a day for him to respond (she forgot to factor in the time difference), Holliday regretted her boldness. "This guy messaged me and said how inspiring I am, and I'm just thirsty," she remembers, laughing. While it's apparent Nick is Tess Holliday's biggest fan, as well as, he says, her social media coordinator with a successful career as a photographer in his own right, he's also signed up for an insane ride. "You look, like, best era Elizabeth Taylor right now," he tells her affectionately.

Nick is just one example of Holliday going after what she wants. As we greeted each other for the first time, she asked why she has yet to appear on the cover of PAPER. With two children (Rylee and Bowie Juniper) as well a flourishing career as both a model and motivator Holliday refuses to slow down and explains her tenacity to keep elevating perhaps derives from the fact that Holliday felt like the "weird fat kid" for a long time. Ironically, this visibility means Holliday is often cast because she's been the "token fat girl." While she's immensely talented and wants to work, Holliday says she's frustrated that she has become the go-to face for brands to employ when hoping to demonstrate their commitment to inclusion. While some fashion houses are genuine in their quest to showcase size diversity, Holliday says many incredible models, particularly women of color, remain ignored while fashion latches onto one (white) model to represent 100 million different women. This was apparently more evident than ever at this past New York Fashion Week.

"I want to see plus-size models that are bigger than a size 14...I'm also sick of plus-size women being pitted against each other, and they never pick anyone who is past a certain size or dark-skinned. Except one show that had a size 22 — but that was for publicity — this past fashion week had more plus-size models than ever but no one was past a size 14," she says, visibly agitated.

There may be an an unhealthy amount of appreciation for thin women, but with the prevalence of Kim Kardashian and Beyoncé, society has certainly evolved to embrace a new body ideal. Surely, I proffer, this indicates a shift towards a similar acceptance of plus-size women?

"It's a different standard but it's still a standard." Tess says, shaking her head. "Unrealistic, unattainable ideals of beauty. Kim Kardashian has had a lot of work to get that body — and that's fine, I have Dolly Parton tattooed on me, do whatever you want. But again, they're still praising unrealistic body types. Beauty just has to be more diverse."

Even as successful as she's become, Holliday experiences this rejection firsthand on a nearly everyday basis. Most luxury fashion houses still refuse to make clothes for larger women (Gucci will do plus-size mens for their devoted rap fan base, but women have yet to receive the same treatment). "I fucking love Gucci," she says, "I love Vivienne Westwood, I love Alexander McQueen, but I can't wear it."

"It was incredibly frustrating as a kid growing up reading all these fashion magazines, feeling like the fashion wasn't attainable because of the money, now that I'm successful and could afford to buy Gucci, I can't buy it in my size. I don't have a choice but to wear plus-sized designers which again, I find frustrating that plus-sized models don't wear plus-sized designers when they're out on the red carpet and they just wear high end designers. I feel like it's nice for your fashion to be accessible to your fans and followers. I always try."

Similarly infuriating is the fact that in almost every interview Holliday is forced to address her health, or evidently from the press' perspective, lack thereof. "[Reporters] say, you know, how do you feel about straight-sized models on the runway, do you feel like you're sending an unhealthy message the same way they're sending an unhealthy message? And you know you can't compare underweight models because of the pressure of the industry to me being fat and modeling."

What does she want from the press? Or the public?

"It would just be nice," she says, "if people acknowledged how fucking hard I work."

Part of that work is maintaining an unrelenting online presence. When it's not promoting a specific project, it's a selfie, or a still from a recent shoot, or a picture with Nick, all to keep her fan base engaged. It's a necessary evil for a model working within an industry whose marketing strategy has become increasingly dependent on social media, and Holliday's fanbase is large and impressively active. Not to mention she founded the massively popular account EffYourBeautyStandards, which seeks to empower followers by posting pictures of women of all sizes around the world. Tess Holliday takes photo of me with the giant chocolate mousse she ordered for her Instagram story, then peruses photos of her from earlier up the Empire State building, lamenting over what to caption her potential post.

"I wish that I could just do stuff and it could just appear on my social media. Before you sat here it took me forever to post what I posted, and I was over it."

As she apologizes to the waiter clearing our plates for her untouched anchovy salad, I realize now that Holliday doesn't want to be who she's had to be in the public eye. When I tell her how much she's contributing to the conversation, she sighs wearily. She doesn't want to be the pin-up girl for call-out culture. She doesn't really want to be controversial. She feels "most sexy" at home without makeup on. She's terrified no one will show up to her meet-and-greets, so when she does them she hugs everybody in. One fan stood on a bus for 24 hours (the seats were broken) to meet Holliday, and she hasn't forgotten.

At the same time Holliday, is not unaware of that the constant attention is weathering her. She recently read an article about Britney Spears, she says, centering on the star's 2007 mental breakdown. Holliday explains that Spears had been "touched-out," (exhausted by constant invasions of her personal space), something she can relate to personally.

"I can totally understand how she snapped," Holliday says of the star, explaining that your body starts to feel as though it no longer belongs to you. "I totally understand that, you know, I get touched-out. Moms that breastfeed understand, after a few hours I can't handle people touching me on set. I get like that often, that breaking point, but I also worked too hard to be here and I support my family so what else am I going to do?"

Nick and Tess as they became engaged.

But Tess Holliday doesn't just support her family -- there are thousands, if not millions of women who the model has also inspired to accept themselves. Tess Holliday isn't just a plus-size model, an author, a sex symbol, or an industry watchdog; she's become a voice for the marginalized. Tess Holliday has become a shining beacon any one of the 100 million women in this country, downtrodden or disrespected for failing to fit society's expectations, can look to on a dark day. Tess Holliday is unapologetic, unashamed and unafraid to pull the underwire out of her strapless bra in a swanky restaurant. Tess Holliday is a fat girl, who, like everyone else, deserves not only to feel beautiful, but to be seen.

"It's frustrating, but maybe it's just saving me money so that I can retire." Holliday says. "If Gucci made my size, we would be living in a shack down by the river for the rest of our lives."

"But dressed wonderfully," Nick chimes in.

"But dressed wonderfully," she agrees.

Order Tess Holliday's book The Not So Subtle Art of Being a Fat Girl here.

All images courtesy of Tess Holliday