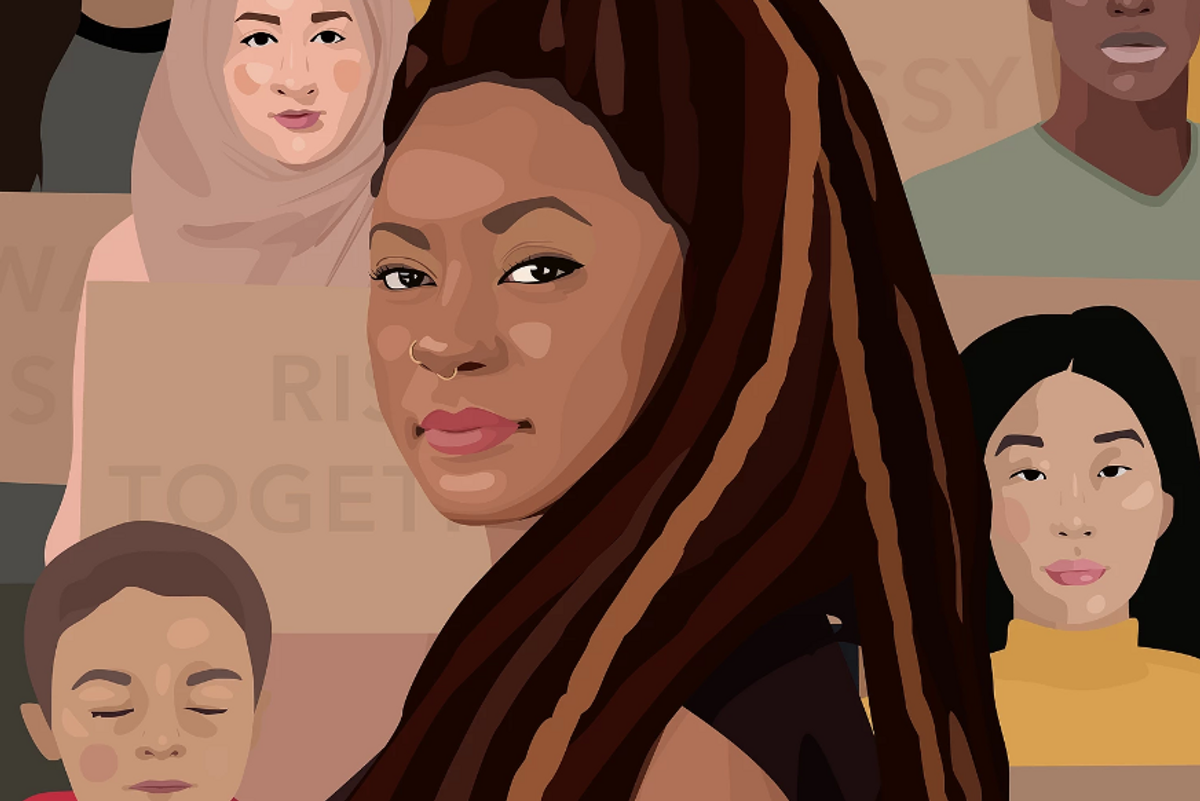 Eighteen-year-old Ameya Okamoto's demeanor is immediately familiar. A few minutes into our conversation, I already identify with her chattiness (she describes herself as a verbal processor), her excitement to share her story, her exhaustion at the cluelessness white people are afforded because of their racial privilege. But, while I was taking endless PhotoBooth pictures and spending Friday nights inside a Forever21 at the mall with my friends as a senior in high school, Okamoto has razor sharp focus. She articulates how her protest art is informed by her chosen family, while also checking her privilege as an Asian American woman working with Black Lives Matter. Over the course of an hour, she introduced me to countless new social justice terms, all of which I proudly texted my friends as soon as I hung up the phone.

It's not wonder she's so remarkably articulate — Okamoto's activism began early. In middle school, after witnessing a close friend get bullied for being transgender, she implemented anti-bullying programs and equity leadership in her school and in schools in the area. "Bullying" is often used as an umbrella term, most recently and publicly by First Lady Melania Trump, without the specifics of why people are bullied ever being addressed. But, Okamoto positioned her middle school activism squarely as social justice work. Though she is wary of activism that is motivated by a single story narrative, she does feel her background as a woman of color and as someone coming from a single parent household informed her decision to demand better conditions for herself and for her peers who are also marginalized.

Related | Beautiful People: Kimberly Drew Is the Future of the Art World

"I grew up in New York City and my mom had me and my sisters pretty young," she says. "I'm the product of a single parent household. I'm the middle of three sisters. I've never lived in a house, I've only ever lived in apartments. My upbringing was triple bunkbeds. My parents divorced in 2007 and we moved to Portland, Oregon, the whitest city, from New York City. That was extremely jarring coming from a place where I grew up surrounded by people of color, adventuring around Chinatown, going to MoMA and The MET. Suddenly I was in the whitest city in America facing racial threats. I got a scholarship to a private school and was the only Asian in the classroom. My whole life has been about rejecting Asian culture but also feeling so curious and feeling like I was denied it."

Since her involvement with a middle school anti-bullying campaign, Okamoto's accolades and involvements have been countless. She's a suicide hotline operator in her free time, a position she decided to get involved with because of her own struggles with mental health. She's also a visual artist, photographer, and filmmaker. She was recently named a U.S. Presidential Scholar in the Arts, is a three-time gold medal winner for National Scholastic Art & Writing competition, and is a YoungArts Finalist in Visual Art.

As a recent winner of the US Presidential Scholar award, Okamoto is going to Trump's White House — a trip she doesn't take lightly as an opportunity to continue her political protest, saying, "I'm going to the White House and I have no idea what I'm going to do, but I want to do something. A lot of the academic winners are like, 'This is not the time to protest,' and I'm like 'It is always the time to protest! Everything I do is inherently political because I'm a person of color, because of who I am and where I'm from and what I've done.' The bar is so low to be controversial as a person of color."

Most recently, her work for YoungArts is on display at a Washington, DC exhibition called Total Tolerance. YoungArts is a foundation that looks to uplift emerging artists between the ages of 15 and 18 by providing them with financial support, professional development, and a feeling of artistic community. Okamoto says her win allowed her to feel like a legitimate artist because she never fully felt protest work and digital work could be considered high brow before.

Though her work is interdisciplinary, she especially likes making digital art, as it can be made and widely distributed quickly and cheaply, which is pivotal for work that exists at the intersection of art and politics. Okamoto has been involved with Portland's Black Lives Matter organization for a few years, and the exhibition displays digital portraits that memorialize people who have lost their lives or loved ones to racialized violence like police brutality. She uses bold colors and broad strokes to make her pop art images, which she hopes replace negative racialized images and mug shots that are often circulated in media stories instead "creating a safe space that celebrates [the people who have died] and their families."

Okamoto's goal is to create art that accessible outside of expensive and exclusive spaces where it is usually shown like museums and galleries. "In activism, it's important to have a quick turnaround," she says. "When I create protest work, I can just email a zip file to 30 different places, to high schoolers across the nation, and all of a sudden they have access to protest work for March for Our Lives. My work is created quickly, which gives it a sense of urgency."

At the same time that she is passionate about her artwork, Okamoto is aware of her position as a non-Black woman of color representing police brutality that affects Black communities. She says, "My work with Black Lives Matter is [complicated] because I am Asian. I'm not Black. I'm creating work about racialized violence with families who are not my own and who don't have the same identity as me. The unifying factor is that we don't have a white experience. At my core, my work is about uplifting other people's voice, especially those in my community who are most marginalized."

Ultimately, Okamoto wants to use her experiences and identities, and her platform, to create art that widens the scope of narratives that reach the mainstream, and to develop understanding by doing so. "My goal is to tell people's stories," she says. "I want people to feel more comfortable claiming their story and their truth because that has been so empowering for me. I think we can build empathy through storytelling."

Before hanging up, Okamoto leaves me with one last nugget of wisdom, one of the many that I quickly text my friends, ardently reminding me, "The duty of the artist is to make the revolution irresistible."